Facebook cracks down on malware with voluntary security 'checkpoints'

Facebook has introduced a system of "malware checkpoints" in an attempt to stem the spread of malicious software through the site.

Facebook is introducing security "checkpoints" for users to help crack down on the spread of malware on the site. The new pages provide Windows users with download links for either Microsoft Security Essentials or McAfee Scan and Repair, two free antivirus packages — while the former is a full security suite, the latter offers a simple one-time scan. Mac users are redirected to an Apple support page for security updates.

The checkpoints do not provide any sort of malware detection on-site, requiring users to proactively scan their system if they "think someone may have used [their] Facebook account without [their] permission." While the process is voluntary, the checkpoints lock down affected accounts until a box is checked certifying that antivirus software has been run.

Whether a significant number of users will take advantage of the checkpoints remains to be seen. After Facebook put considerable effort into notifying potential victims of the DNSChanger malware last month, there may be quite a few security-conscious users ready to try out the new feature. 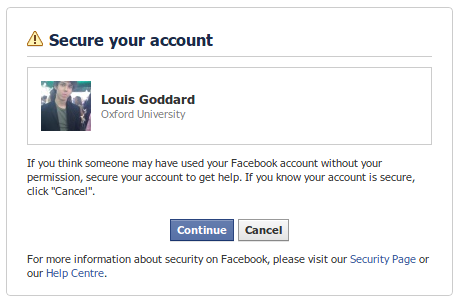