Microsoft has revealed it plans to extend the number of stores in the US and internationally, with a Toronto store opening in Canada later this year.

Microsoft's chief operating officer, Kevin Turner, revealed today that the company plans to open a new Microsoft Store in Toronto later this year. Speaking at the Worldwide Partner Conference today, Turner also revealed plans for a store in Puerto Rico and holiday pop-up stores elsewhere. "You'll see the store brand continue to go out, and go out into the world," said Turner. "We're going to continue to tell the Microsoft story through our stores."

We exclusively revealed Microsoft's Canadian plans earlier this year, but the software maker is also planning to expand into the UK in 2013. We understand that the company is planning to open a new retail store in London during March, 2013. Turner didn't specifically reference stores outside Canada and the US today, but it's clear the company continues to push its stores domestically and internationally.

Update: Microsoft has confirmed the new Canadian store will open in the Yorkdale Shopping Centre.

Update 2: ZDNet is reporting that Microsoft plans to have a total of 44 retail stores in place by June of 2013. 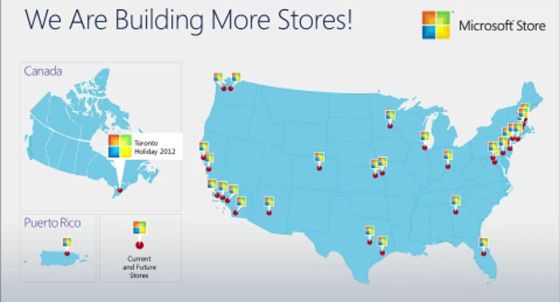