Two months after its big Ice Cream Sandwich update, the international Galaxy Note is getting Android 4.0.4.

Samsung has begun rolling out a 178MB update for the international, HSPA+ version of its Galaxy Note phone-tablet hybrid, upgrading the device's operating system to Android 4.0.4. Aside from patching bugs, the update offers a couple of new features — users are now able to unlock the device by signing their name using the proprietary "S Pen" stylus, and videos are now viewable in picture-in-picture mode, one of the most publicized features of the Galaxy S III.

The update comes almost exactly two months after the first Ice Cream Sandwich update for the international Note, and seems timed to coincide with a delayed upgrade for AT&T's LTE version. The latest package will come to German devices first, with All About Samsung having already provided a detailed run-through. Other international users should get the upgrade in the coming weeks, either over-the-air or through Samsung's Kies desktop management software. 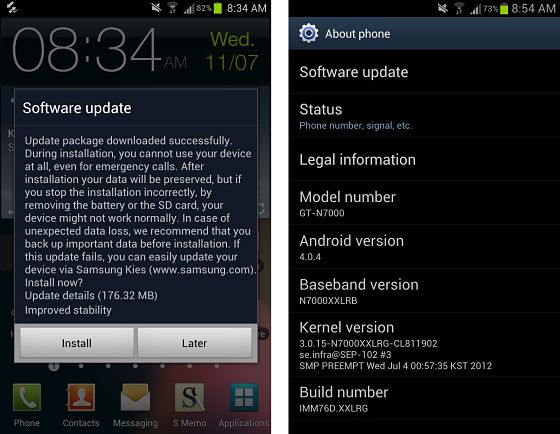