Kevin Turner, Microsoft's Chief Operating Officer, spoke frankly about Google's business methods today at the Worldwide Partner Conference in Toronto. Turner showed a slide that said "Google's approach of illegally collecting private information on all the world's people and exploiting it to target ads is creating surface area" for Bing. He believes that users are growing tired of Google's constant monitoring and ad selling and are crying out for an alternative. Turner also pointed to Bing's growing US marketshare, which rose from 14.38 percent in June 2011 to 15.41 percent as of May 2012. When you factor in "Bing-Powered searches" (sites that use Bing for search, such as Yahoo) that figure rises to 25.63 percent. 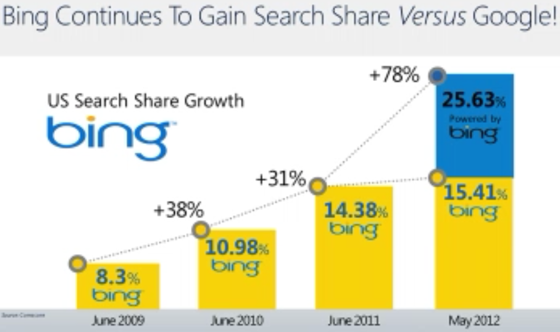 Microsoft announced today that Bing search results are more relevant than Google's for the first time in history, claiming Bing has 61.4 percent "overall relevance" compared to Google's 59.9 percent. It's not clear what metric was used to determine the statistic, as "relevance" could refer to any number of things. One thing Turner didn’t detail was how Microsoft would translate Bing’s newfound "relevance" into increased mind and marketshare. 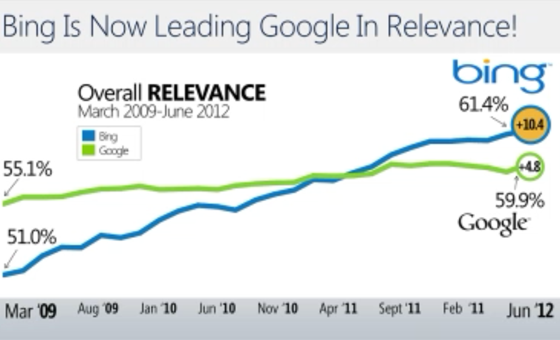