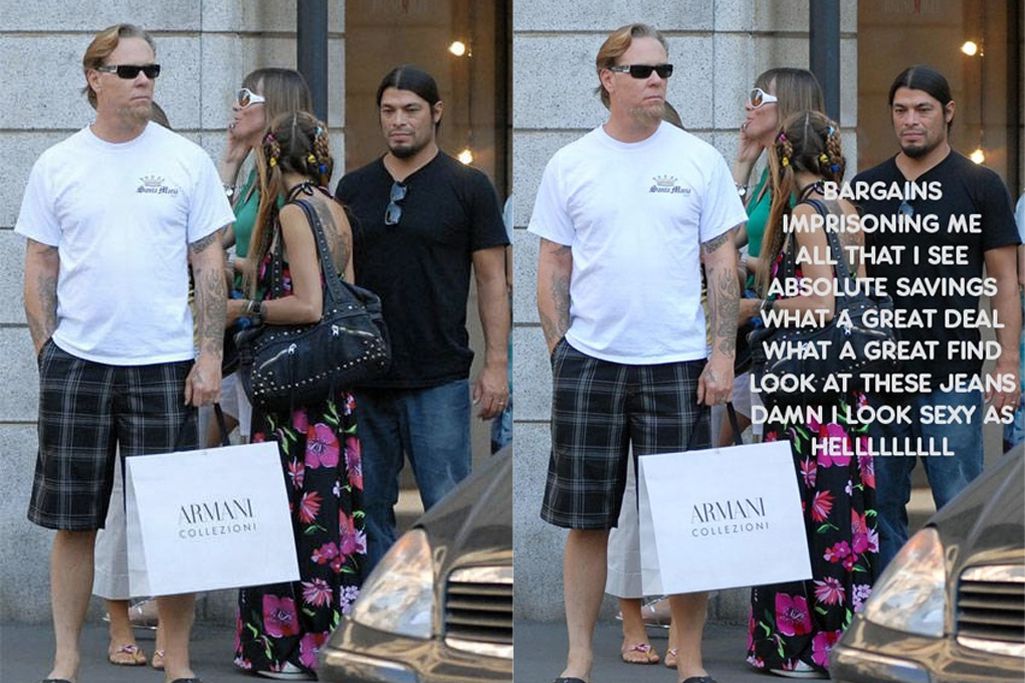 Sometimes, one image can change everything. Usually, a combination of timing and world events collide with a great photographer, an auteur of the single still image, shifting the way that we collectively view the world. For me, that change came somewhere around... oh, September of 2008. The photograph depicted Metallica frontman James Hetfield standing outside of what appeared to be an outlet mall, in plaid shorts and flip flops, holding an Armani shopping bag. He was accompanied by the bass player of Metallica (third: not Cliff, not Newsted) whose name, I have found, is Robert Trujillo, and two women.

The first time I saw this image, however, it had already been molested and modified, in the way that the internet gloriously does sometimes. A caption to the right of the main part of the photo, (sing to yourself, to the tune of "One") reads:

"Bargains / Imprisoning me / All that I see / Absolute savings / What a great deal / What a great find / Look at these jeans / Damn I look sexy as helllllllll."

I don't remember where I first saw the image. In vain over the past few days I've searched my old emails, because I know that in the days that followed my initial find, I forwarded it onto at least two brothers and three friends. I'm tempted to say I first saw it on Facebook, but I can't be sure.

Fast forward to last weekend, when I heard the tail end — the most kick ass part — of "One" on the radio. It was then that I realized that the "Bargains" image has irreparably damaged my relationship with this song. All that I hear is the caption to the photo, not the actual lyrics. While the song was still playing, I looked up the image on my phone by searching "Metallica bargains" (no quotes) on Google. There were a lot of results, and many of them were the image I was looking for. I loaded it up, and once again, laughing uncontrollably, basked in the warm light of a good joke.

And an apt one, too. At a very basic level, this image is essentially perfect because it's simply always funny to see rockers doing mundane things. Like the image of Glenn Danzig carrying a value-sized box of cat litter, it takes their innate coolness down a notch, sure, but it also serves to remind us that they too, are just some dudes who need to shop.

But the Metallica image endures for another reason, I think. It's that thing I said above about timing and world events. Metallica was, in the 1980's and very early 1990's, one of the best and best-loved heavy metal bands. "One" perhaps typifies this relationship that the band straddled between the niche heavy metal fan and MTV-loving masses (how many times as a child, did I watch that video, sitting on the floor of my basement, mouth gaping open?). But, by 2008, they had seen better days. By the time this photograph — sans caption — was first published online, the band's documentary Some Kind of Monster had peeled back the curtain a little farther than anyone probably wanted. The album the band was making in that film, St. Anger, also left much to be desired. Good songs, for instance. But more importantly, Metallica had made a fatal mistake; one which, if the lack of Metallica in my Rdio collection is any indication, continues to this day. Metallica had misunderstood the internet, and the move to digital music distribution. The band sued Napster in 2000, becoming an outspoken symbol for a new generation of everything that was wrong with the music industry, and they never really recovered from that battle. 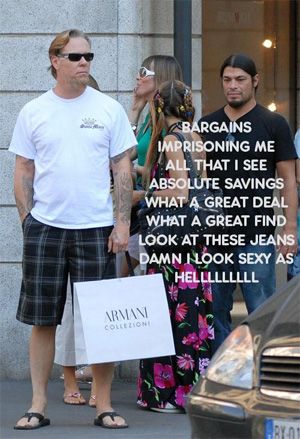 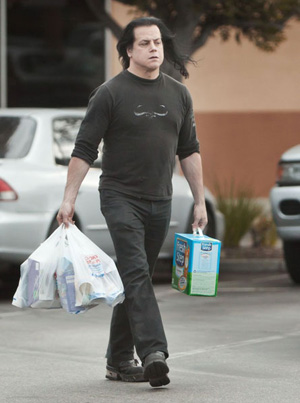 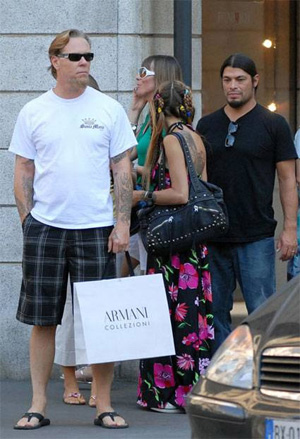 So, in 2008, when an image of Hetfield and Trujillo shopping at Armani appeared online, it was the perfect moment, the right mixture of timing, world events, and the newly-born viral meme, which combined to produce one of my favorite internet things ever. This band was the best available — and maybe most deserving — target for the internet’s nascent and growing ability to cleverly and succinctly make fun of something.

These days, images with captions on them are a reflex, a given part of life on the internet. I make sometimes several a day, and even my parents know how to "read" them. But in 2008, memes weren't exactly mainstream, and many people had never heard of 4chan. So, when I decided to try to find the origins of the captioned image, I figured it had inevitably come from 4chan because that's where most funny pictures with captions tend to originate, but hoped to find something more interesting. Searching around metal forums from 2008 lead me, fairly quickly, to an August 25th, 2008 blog post on the Boston Phoenix, by staff writer Carly Carioli.

In the article, which has the uncaptioned photo as its lead image, Cariloi makes fun of The New Yorker’s lack of familiarity with Some Kind of Monster (lol), and also takes the opportunity to make up a few captions for the image, including, "The Shorts that Should Not Be," and "Enter Salesman." He also suggests his readers make up their own captions in the comments. So, here it was, a music writer in Boston, who had seemingly suggested the act of creation that would result in the image which still haunts me. I browsed the comments, and even got a few chuckles ("Enter Blandman" and "Kill a Mall" are both pretty good!), before I saw what I was looking for. Comment #35, posted by "Anonymous," 4 years ago: 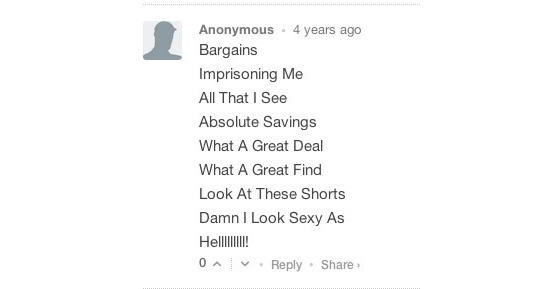 I scrolled up, knowing what I needed to do, but wait! Comments for this thread are now closed. How would I ever find this genius if I can’t respond to him!? 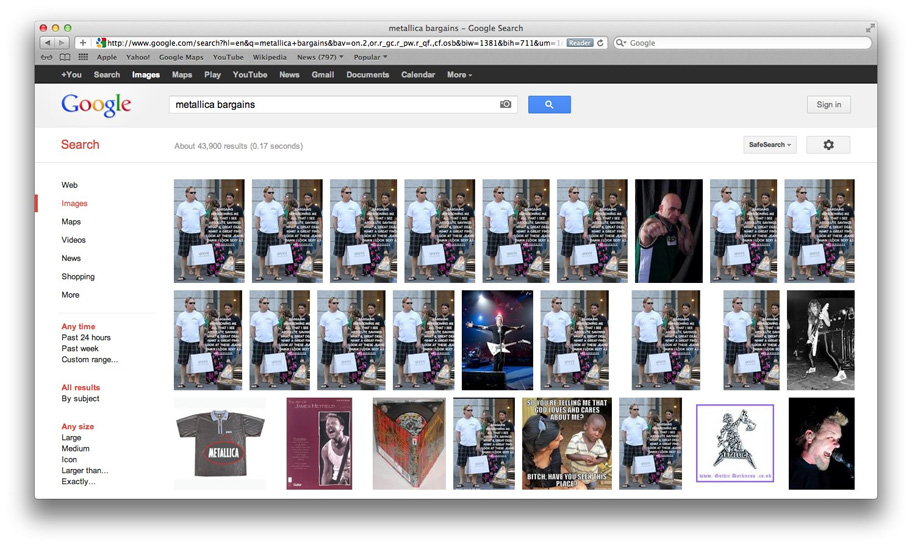 So, here it was, the image, the idea, and the caption, but not yet fused into one perfectly captioned (with Frankfurter?) sentiment, forever to flood Google image searches for the words "Metallica" and "bargains." I decided to keep digging.

I tweeted at the author of the Phoenix article, and thankfully, he emailed me back. When I asked him about it, he said he had a "vague recollection" of writing the article, and I felt a little deflated. I can’t blame him, it was four years ago, but he was obviously unaware that he is one of the progenitors of something so near and dear to my heart.

I decided to keep digging, looking at the places each individual image in Google search results originated from. The 2008 results were the most promising, of course, and finally lead me to a photo agency, Bauer Griffin, where again, I found exactly what I was looking for. In its archives, there it was, with the caption:

Milan? Well, that changes everything. Wife? For years I’d assumed Hetfield was just buying new threads in LA but had never considered Milan.* Digging deeper into the Bauer Griffin archives, I found that there wasn’t just one photo taken that day, but a series of four images, all incredible. I pored over them to see if the best image had ultimately won, and came to the conclusion that yes, it had. I emailed Bauer Griffin to see if I could ascertain who the photographer was, so that I could ask him if he knew what his creation had become. They haven’t gotten back to me. 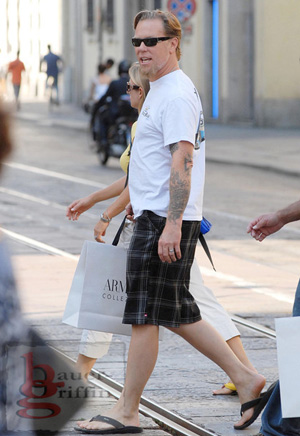 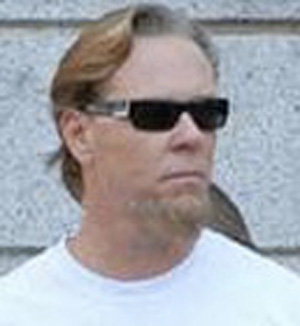 So, nearly one week since my quest began in earnest, I've gotten some answers, but am left with a lot of questions. For starters, what's inside the bag? Also, I still don’t know who actually captioned this image, why they chose that particular font, and if, in fact, they were the author of the original, brilliant comment on The Phoenix. In my brightest moments, I imagine that is the case. In my darkest moments, however, I feel like I’ll never know the answer for sure, and sometimes, I even begin to doubt the cultural relevancy of this image to begin with: I asked two of my friends who know all the latest, coolest memes, and they both essentially said the same thing to me on GChat:

What about you? Have you seen this image? Did you photoshop the caption onto it almost exactly four years ago? Let me know in the comments, and rest assured that my search for the truth will go on.

Thanks to John Herrman for introducing me to the image of Glenn Danzig carrying a giant box of cat litter.

An earlier version of this article stated that Metallica was working on Death Magnetic in the film Some Kind of Monster. They were, in fact, working on an even worse album, St. Anger. The article has been corrected.

*Some have pointed out that I should have immediately recognized this photo was shot in Milan because the bag reads Armani Collezioni. I can confirm that in addition to the freestanding stores in Milan and Paris, the Collezioni is also available at high-end retailers such as Bergdorf Goodman, though whether it doles out the custom bags is unknown. Secondly, readers have pointed out that the image also has a car with an obviously Italian license plate in it. I apologize for my oversight.