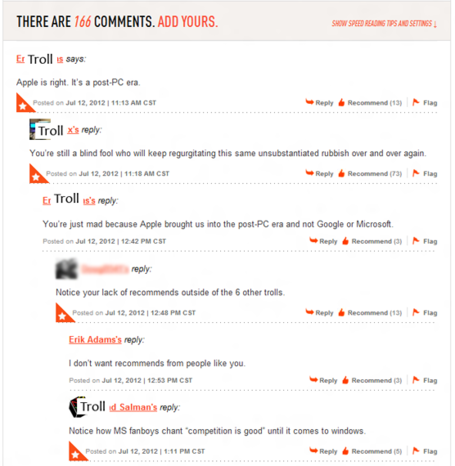 I've noticed, as I'm sure many others have, that there has been an enormous increase in flame wars and general trolling in the comments section of nearly every article, Above is a prime example, the first guy started off with a partisan claim and the following guy went straight for the jugular, using deadly force where none was required.

People, we can stop this NOW!

All I ask is that everyone agree to never, under any circumstances feed a troll; in addition, everyone should make a serious effort to not complain about how much Windows 8 will kill your mother, or how Apple is attempting to harvest your sperm, or any such nonsense.

If someone says "Obama is a socialist," send him flowers; someone claims "Linux is for fools and masochists" ignore it, if someone mentions a certain war that took place between 1938 and 1945 quietly ban him from the internet for breaking rule #18640: Mention of WWII is no longer allowed after the great 4chan debacle of Jan 2012.

We're better than this, I'm pleading with you guys, Don't let the trolls win, be nice to each other like the days of old!