In the US and elsewhere, documents requested under the Freedom of Information Act and its equivalents can be instrumental in preserving government accountability. With Nulpunt, a social network for FOIA requests, Amsterdam design firm Metahaven wants to make the process a little less painful.

In the US and elsewhere, documents requested under the Freedom of Information Act (FOIA) and its equivalents can be instrumental in preserving government accountability. Just recently, after some significant effort, EFF obtained information on the FAA's authorizations for the use of domestic aerial drones by public and private entities, shedding light on one of the country's more contentious privacy issues. But in addition to the lengthy waiting periods and nebulous criteria for rejection often associated with such queries, the process of sifting through documents obtained in this way remains incredibly onerous for the average citizen.

Amsterdam-based design and research firm Metahaven is developing a solution to the second half of that problem: a social media service where users can easily access, share, comment and collaborate on publicly disclosed documents in order to keep governments transparent and accountable.

It's called Nulpunt (0. or "Zero-Point" in English) and it's an online database of FOIA materials that functions like a social RSS reader, allowing users to subscribe to topics of interest and automatically receive relevant government documents which can then be notated within the software using a special marking tool. Parts of the documents can then be excerpted and shared, giving regular users the ability to easily locate and explore the information most important to them.

The project's leads — Daniel Van Der Velden and Vinca Kruk of Metahaven, and collaborating artist Jonas Staal — say it comes as a response to an increasing demand for government participation. "The starting point for [Nulpunt] comes from the involvement of both our practices with what we perceive as a global democratization and civil rights movement," said the group in a recent conversation with The Verge. Invoking the spirit of Wikileaks and political movements like Occupy, Anonymous, and Sweden's Pirate Party, they position Nulpunt as social software with one ultimate goal: to eliminate government secrecy. 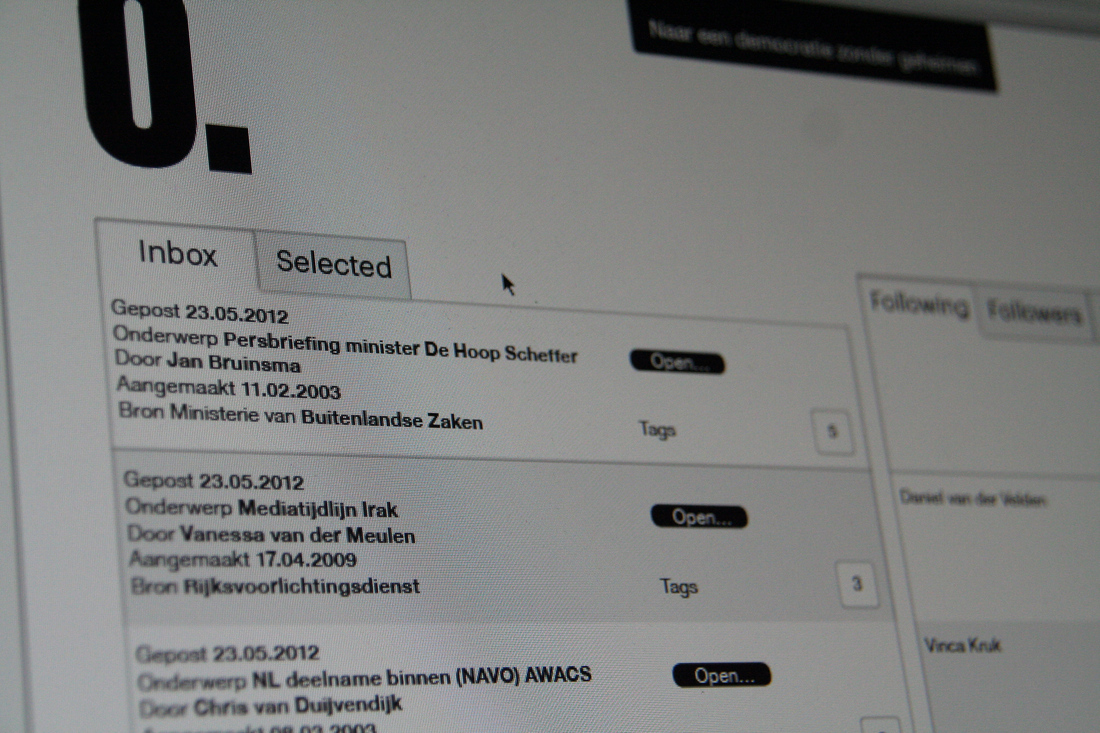 The idea was foreshadowed in Facestate, Metahaven's recent graphic design project currently installed on Governor's Island in New York City. Facestate's branded fiction also focuses on the intermingling of social media and politics, but explores a more sinister potential, imagining a world where the two fuse seamlessly into a new form of hybrid totalitarian government powered by virtual currency.

It is this perverse dynamic — that of a hypersocial, transparent, and surveilled populace living under increasingly secretive authoritarian power — that Nulpunt's creators hope to extinguish. "Facestate is one scenario for the future," the group explains, "but Nulpunt is strongly in favor of an opposite scenario, where social media are civic media, used to follow and control government rather than deployed as a surveillance dragnet and wholesale replacement for the public sector."

"A global civil rights movement would not be global if it did not defend values that are universal in nature."

Initially, Nulpunt is being developed as a way to augment new legislation in the Netherlands, which aims to improve an outdated transparency law called WOB. Unlike in the past, the new WOB will compel the Dutch government and other public entities to disclose documents "proactively and immediately" into a permanent digital archive. But with any luck, the service won't be exclusive to the Netherlands for long.

"A global civil rights movement would not be global if it [did] not defend values that are universal in nature," the group said, emphasizing that expansion to other countries is a key goal of the project. "We are collaborating with IMMI in Iceland, who are a partner in this project — they oversee the most ambitious transparency reforms in any country to date [and] are interested in using this future tool."

In other countries like the United States, FOIA requesters frequently encounter strong resistance. In one example, researchers have shown that the US Department of Justice has responded with full or partial records to only around 56.7 percent of requests last year, despite the department's initial (skewed) report of 94.5 percent. And the aforementioned EFF request on domestic drone authorizations took over a year to receive a response, prompting a FOIA lawsuit against the Department of Transportation.

"FOIA sites still reflect the spirit of their underlying laws, which consider FOIA to be a favor granted to citizens by the State."

As such, the success of tools like Nulpunt may very well depend on the adoption of new transparency laws similar to the kind currently being applied in the Netherlands. Several websites, like Germany's Frag den Staat ("Ask the State"), the British What Do They Know?, and US-based MuckRock already help send and track FOIA requests, improving the chances that they will be answered promptly. "This is an important improvement, especially now that governments have made it into an art to delay the process," Nulpunt's creators said. "However, [these] sites still reflect the spirit of their underlying laws, which consider FOIA to be a favor granted to citizens by the State."

The rapid dissemination of documents will also depend on the widespread adoption of effective OCR to make information searchable and easy to categorize and store online. But what's perhaps most important about Nulpunt is that it proposes a fundamental shift in how the documents themselves are received and studied, creating an "inbox" system to bring data directly to users rather than facilitating individual requests, which require advance knowledge of the information in question.

Nulpunt's creators say the format was inspired by a key failing of the original Wikileaks website, where it was assumed that large numbers of people would seek out and explore the released documents. "This didn't happen, and WikiLeaks since abandoned the format, defining itself as a journalistic and publishing outfit able to receive attention by virtue of its brand," the group said. "What WikiLeaks (still in its wiki days) lacked was a tool for users to gloss over and select information quickly. The "Highlight," "Comment," and "Amplify" functions in Nulpunt aim to improve such initial shortcomings."

Nulpunt's team acknowledges the challenges in bringing the service to the Netherlands and beyond. But with or without legislative reform, Nulpunt is building these tools in preparation for when the law finally catches up. For now, the team is working on a series of proofs-of-concept that take into account the various unknowns, hoping for collaboration with various academic and research organizations. "We are willing to work together with any initiative or group which considers our goals necessary and desirable," the group said. "A truly democratic initiative is always an open call."