AT&T may charge for FaceTime calls over 3G

AT&T may charge for FaceTime calls over 3G

9to5Mac has acquired screenshots from a recently-released beta version of iOS 6 that seem to show FaceTime over cellular networks requiring additional fees.

Apple's FaceTime video chat service may have been Wi-Fi-only since its inception, but that means it's also been free all along. This could change come the launch of iOS 6, however — the introduction of FaceTime calling over 3G could well be accompanied by charges for the first time. 9to5Mac has acquired screenshots from the recently-released iOS 6 beta 3 that seem to show FaceTime over cellular networks requiring activation (read: a contract bolt-on) in a similar way to the Personal Hotspot feature. Attempting to use 3G calling on an iPhone reportedly brings up an error message imploring the user to contact AT&T to have the feature enabled, though 9to5Mac's iPad worked without running into the issue.

If true, this would raise all sorts of questions as to how AT&T plans to handle its customers' data allowances. A flat rate for unlimited FaceTime calling could undoubtedly result in some hefty packet consumption, and the real question then would be if FaceTime data counts towards users' bandwidth caps. If so, people might find themselves needing a higher data plan on top of the extra FaceTime charges, but if not it'd raise the issue of AT&T's adherence to net neutrality principles — Comcast has come under fire recently for letting its customers use the Xfinity video service without it counting towards their download limits. Were AT&T to implement a similar policy, it could have far-reaching implications for Skype and other services with customers that currently have to deal with managing their data. 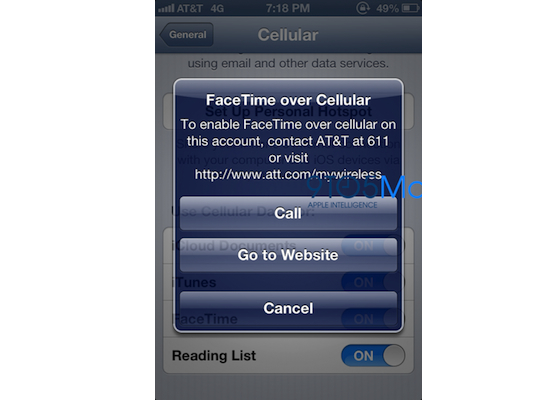