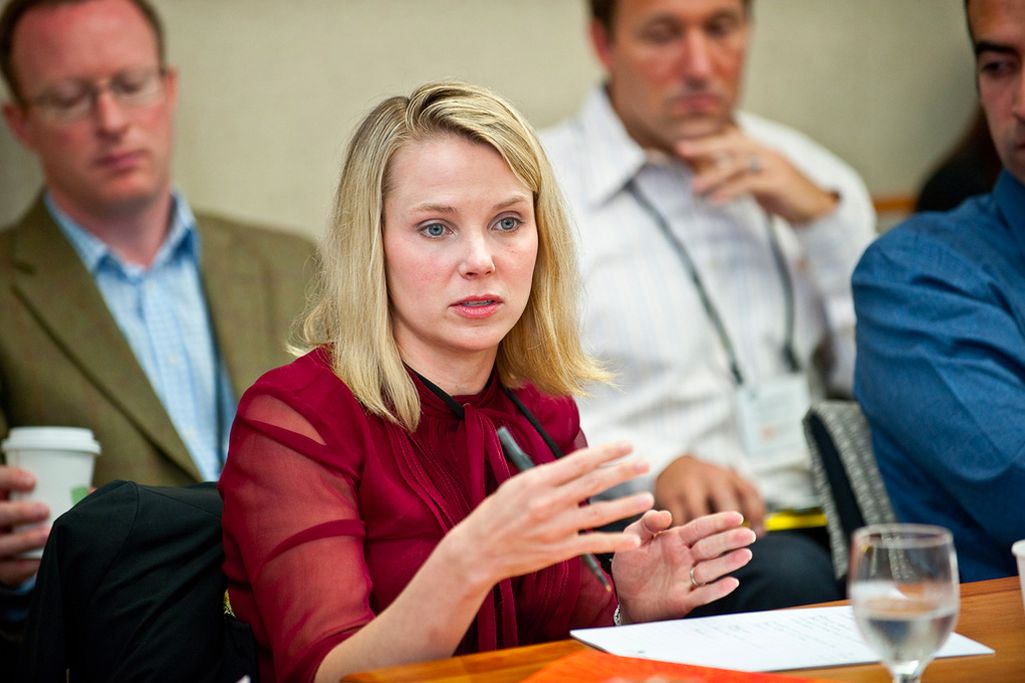 Marissa Mayer started as the CEO of Yahoo today, after spending the last 13 or so years at Google managing various products at different times, including its most profitable (Search) as well as its most fanciful (Google Doodles).

Regardless of her shifting roles and titles, Mayer has been one of Google’s most public faces for years. She’s one of the few recognizable personalities at the company besides founders Larry Page and Sergey Brin, and has appeared everywhere from insidery trade shows like TechCrunch Disrupt to the pages of Glamour. She’s best known as a meticulous — some say over-controlling — product designer who blossoms in the spotlight.

Yahoo’s board reportedly picked Mayer over interim CEO Ross Levinsohn, formerly the head of global media. By doing so, the company has chosen to focus on products rather than content or advertising. It’s the first clear direction Yahoo’s had in years. It also represents a stark contrast to the strategy taken by rival AOL, run by former Google ad man Tim Armstrong, which opted to become a digital publisher with the acquisition of The Huffington Post.

After news of Mayer’s appointment broke late Monday, Yahoo’s stock jumped 2.3 percent as investors gave Mayer their vote of confidence. The once-dominant web company has been fading into irrelevance for years, and a young, articulate executive from one of the web’s leading innovators seems like the perfect antidote. "She's exactly what Yahoo needs," former Google lead designer Kevin Fox wrote on his blog.

If Mayer was such a star, what made her leave? Mayer was hired as employee #20 at Google immediately after graduating from Stanford with bachelor's and master’s degrees in computer science in 1999. From the beginning, she was a polarizing figure. Douglas Edwards, Google employee #59, portrayed her as brilliant but difficult to work with in his book about the early days of Google. Doug Bowman, Google’s visual design lead for three years and something of a celebrity within the design community, passive-aggressively blamed Mayer for Google’s emphasis on data over good design when he resigned in 2009. One source told The Verge that Mayer was "universally hated" by the staff; another said Mayer was frequently trailed by a gaggle of fanboys when walking around Google’s Mountain View offices. 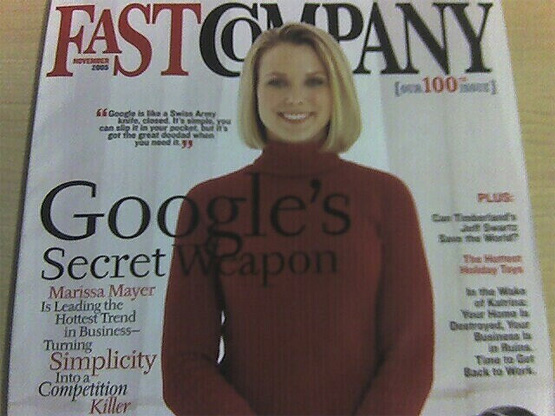 If Mayer has a fan club, Yahoo’s board of directors is in it — especially after burning through four CEOs in five years. "The Board of Directors unanimously agreed that Marissa's unparalleled track record in technology, design, and product execution makes her the right leader for Yahoo at this time of enormous opportunity," chairman Fred Amoroso said in a press release.

But while few have been as intimate with Google’s myriad products as Mayer, she seemed to have plateaued at Google. After five years as vice president of search products and user experience, she was shifted to vice president of location and local services, which at the time was characterized as a promotion. Pundits interpreted Mayer’s move as an indication that Google was ready to focus seriously on its non-search products.

In reality, Mayer’s relative stature within the company was diminishing — she just couldn’t seem to crack into the top ranks. Jeff Huber, who joined Google four years after Mayer, was promoted to senior vice president of local and commerce in 2011, a level above Mayer. Meanwhile, Mayer was dropped from the elite "operating committee" known as the L Team (for "Larry’s team") after less than a year.

Google is also changing. During the Mayer era, data was king and Google was constantly launching new products fast and hard. Now the company is putting a heavier emphasis on design and narrowing its focus, deprecating marginal products in order to focus on a few core offerings including Google+ and search. Earlier this month Google announced that one of the projects credited to Mayer, iGoogle, will be shut down; other products in her portfolio, including Google Earth, are far from the top of the company’s priority list. Meanwhile, Google’s local effort was floundering before and after Mayer moved to the location and local department. Prior to her transfer, Google flubbed attempts to acquire fast-growing local services including Yelp and Groupon. After her transfer, Google bought old media empire Zagat. The acquisition, which Mayer personally announced in a haiku tweet, was received with skepticism. So far, the $100 to $200 million buy has had little visible impact other than Zagat reviews appearing on Google Maps and on Google+ pages, an addition of debatable value which presumably could have been accomplished with just a partnership.

The ambitious executive started to recognize that she had no path to a top position such as COO or CEO, said a former colleague who worked closely with Mayer at Google. Taking the top job at Yahoo was "a reasonably easy decision," Mayer told the Times.

Under former CEO Carol Bartz, Yahoo launched a long list of forgettable feature updates to B-list services like Yahoo Music as well as the Yahoo Contributor Network content farm. But Yahoo’s identity crisis is Mayer’s blank slate. Her style is to launch lots of products and evolve them quickly based on data. Google Labs, the experimental sandbox where very early product versions were tested, was shut down last year. Yahoo Labs, a network of talented but rudderless researchers, is ripe for leadership. Yahoo is visited by roughly 700 million people a month and owns the most popular web-based email service in the U.S. Under its new ambitious, decisive leader, it has a chance to rejoin the web’s innovators.

A brief history of Marissa

1999: Mayer graduates from Stanford and receives 14 job offers immediately, which she organizes into a spreadsheet. She chooses Google, where she becomes the company’s 20th employee and first female engineer, even though she believes Google has a 98 percent chance of failure.

2000: Eight months into the job, Mayer starts filling in various positions. She works on the web server team, but forays into user experience as a part-time human interaction engineer, fiddling with the appearance of the homepage and results pages. She starts advising on marketing and branding, and starts coordinating Google Doodles along with a few other early Googlers.

This is also when Yahoo adopts Google as its search engine. "Remember, Marissa worked with Yahoo for quite a long time because of Google's partnership with them," says Mayer’s former colleague at Google.

2001: Mayer officially transfers from engineering to product; in other words, she shifts from programming to designing what Google’s services will do and how they’ll appear. The company reorganizes late in the year and Eric Schmidt is named CEO. Larry Page and Sergey Brin become presidents of products and technology, respectively. In the fourth quarter, Page makes Mayer the "user interaction lead for Google.com," according to a book written by an early employee.

2002: Google News launches. Mayer talks to the press about it; she is described as "Google News product manager" who "developed the tool with five staff engineers."

2003: According to Mayer’s bio for a talk given early that year at Stanford, Mayer was "product manager for Google.com" and "formerly the technical lead for the user-interface team." The bio goes on to credit her with spearheading "almost every user-interface change to Google's website in the past three years." By now she has worked on search classification, the Google web directory, image search, Google News, the international expansion for Google.com, and user testing.

2004: Mayer announces Google’s desktop search on the official Google blog. She signs off as "director, consumer web products." Independently, Google Local is introduced by Bret Taylor, who later became the CTO of Facebook.

2007: After buying YouTube and launching Docs and Spreadsheets, it’s indisputable that Google is now more than a web search company. CNN calls Mayer "Google design guru." Her career is starting to peak.

Mayer appears for a keynote conversation at the Search Engine Strategies convention, where Danny Sullivan of Search Engine Land asks her what her favorite Google products are. She names web search, Book Search, and Google Desktop.

2008: At 33, Mayer becomes the youngest woman ever to make it to Fortune's Most Powerful Women list, where she clocks in at #50. She gives a keynote on design and interaction at Google I/O.

2009: Mayer marries Zach Bogue, a private-equity executive. In a story about the wedding, Gawker’s Ryan Tate declares her "Google’s star-dappled moon queen." She debunks rumors that she is leaving Google.

2010: In the fall, Fortune names Mayer #42 on its 50 Most Powerful Women list. "It's her job to make sure Google's moneymaker — the search engine — stays ahead of the game," the magazine writes.

Shortly thereafter, Mayer, 35, is named vice president of local and location services, which is reported as a promotion. She is also added to a special 12-person "operating committee" of "top decision-makers," reports The New York Times.

2011: Jeff Huber makes it to Google’s senior leadership team, leapfrogging Mayer for a promotion. Mayer talks up Google’s local efforts to the press. While giving a talk at South By Southwest Interactive, Mayer plugs Google Maps Navigation, Hotpot, and Google Goggles. In the program, she is identified as vice president of consumer products.

In July, Mayer joins Yahoo as CEO. "Yahoo's products will continue to enhance our partnerships with advertisers, technology and media companies, while inspiring and delighting our users. There is a lot to do and I can't wait to get started," she said in a press release.

In a twist, Mayer tells Fortune that she is pregnant: "My maternity leave will be a few weeks long and I'll work throughout it."