Intellectual Properly is a series where we seek to set the record straight on the day's hottest patent, copyright and related intellectual property issues in the tech world.

It's Tuesday, so you know what that means: newly minted patents are here. Today's fun comes straight from Cupertino via the US Patent and Trademark Office and includes another scrolling patent — US patent no. 8,223,134 to be exact. The '134 patent claims priority back to 2007 and includes pretty broad coverage on a disappearing vertical scroll bar on portable touch screen devices. Here's a summary of the key portions of the first and broadest claim in the patent:

If you think that claim has the potential to cover most Android devices out there, you may be right. The disappearing vertical bar has been a feature in Android going back to at least version 2.3. Below are side-by-side comparison shots highlighting such a vertical bar in use in iOS (left) and Android (right) — just prior to its disappearance: 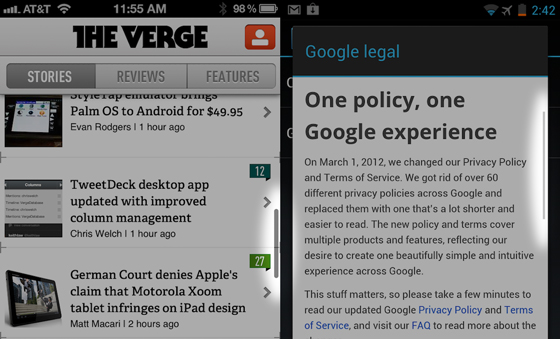 We don't have any idea how Apple will use this patent, if at all, but we do know it's been rather fond of asserting other patents in its portfolio relating to touch and scrolling features. On the other hand, there's always one easy workaround available to all: the traditional full screen vertical scroll bar that's existed since the dawn of graphical user interfaces. Only time will tell, but we'll certainly keep an eye out to see if this patent shows up in one of the many ongoing patent battles between Apple and Android OEMs.