Researchers have used documents from WikiLeaks to successfully predict insurgent violence in Afghanistan, according to a new report published Monday by the Proceedings of the National Academy of Sciences.

Share All sharing options for: Researchers use WikiLeaks data to predict insurgent attacks

Researchers have used documents from WikiLeaks to successfully predict insurgent violence in Afghanistan, according to a new report published Monday by the Proceedings of the National Academy of Sciences. The study uses about 77,000 logs from the Afghan War Diary that WikiLeaks released to the public on July 25, 2010 to predict future attacks. These military logs contain data of all insurgent incidences between 2004 and 2009, ranging from "preplanned military activity" to "spontaneous stop-and-search events."

This large sample size is crucial in building an algorithm to predict future events, making the Afghan War Diary a much more valuable resource than limited media reports. The researchers created an algorithm that takes into account a location's "volatility" — the more volatile a region is, the harder it is to accurately predict future events. The algorithm has proven quite successful for less-volatile regions like the Baghlan province, where researchers predicted that violence would increase from 100 incidents in 2009 to 228 incidences in 2010. Those predictions weren't far off — according to the Afghanistan NGO Safety Office, there were 222 incidents in 2010.

Although the algorithm's accuracy is limited in highly volatile regions, it's still one of the most effective to date. DARPA has taken aggressive measures to prevent similar WikiLeaks data from being released in the past, but perhaps this sort of white hat analysis will start to change opinions in Washington. 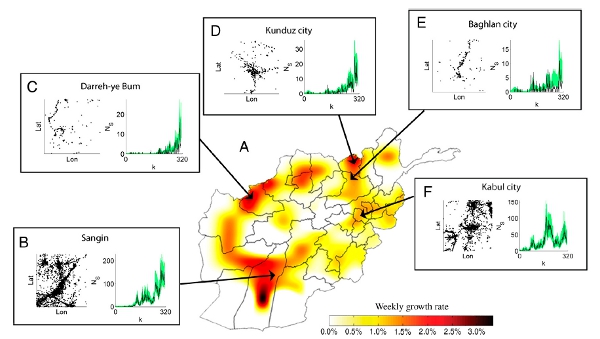