Foursquare lets merchants talk to their best customers in real time and delivers the information only to users who are nearby.

Foursquare recently redesigned its app to focus less on the act of checking in and more on an activity feed of what is going on around you. The goal is to be the best, most personalized guide to any city or neighborhood. Today it's giving the nearly one million merchants who have claimed their venues on Foursquare a way to communicate with their best customers in real time, by letting them post what is calls local updates into the feeds of their loyal patrons.

Merchants have been able to claim their venues for a long time. They could add pictures, menus and special offers. But these were relatively static items. With local updates, a coffee shop can push a special for fifty percent off iced drinks on a single hot afternoon. That update goes out anyone who has checked into the coffee shop several times or liked the venue through the app. Local updates are also geo-targeted, so they only appear in the streams of users who are close by. 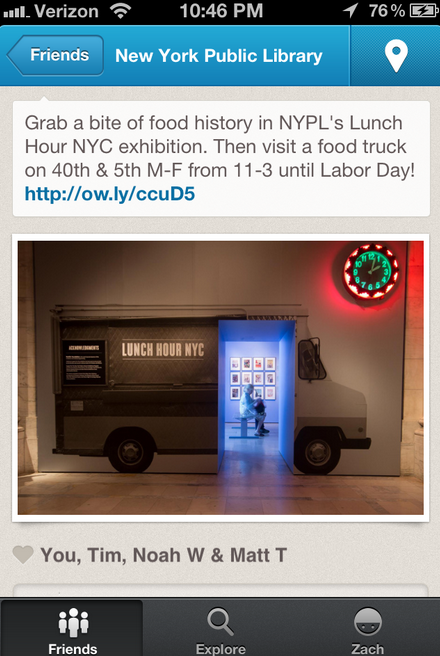 "If you're a small business owner, you want this to be easy," said Foursquare's Noah Weiss, the product lead on the local updates project. "All they have to do is enter in the text, images and specials. We take care of making sure that it goes out to their repeat customers, and only when those users are nearby."

Weiss says that for users in New York City, Foursquare's algorithms will have a very different definition of what is "nearby" than users who are opening the app in suburban Illinois. "We can use the data we have collected from over two billion check-ins to understand what's local in different contexts," he explained.

The potential pitfall to this, of course, is that users will feel they are being spammed with too many offers or updates. Weiss says that they are trying hard to avoid this: updates won't appear as push notifications and will only be in the timeline of users who have shown they like a particular business by checking into a place regularly. "If you visited a certain coffee shop a dozen times, but stopped going there a year ago, we won't suddenly fill your stream with updates from them," said Weiss.

The service will be free for merchants to use, but it shows the direction Foursquare's business is headed. There is a massive migration from the desktop to mobile, and so far little success making money off those consumers beyond the app store itself and perhaps some games with virtual goods. Foursquare hopes to offer relevant, real time targeting that will engage users who are used to skipping over display ads.