Steve Jobs revealed in his biography that Apple actually started development on what would become the iPad prior to its work on the iPhone — but we're now getting some details on just how long it was in development.

After the iPad launched, Steve Jobs eventually revealed that Apple actually started development on what would become the iPad prior to its work on the iPhone — but we're now getting some details on just how long it was in development. Network World recently got its hands on portions of a deposition Apple designer Jony Ive gave at Samsung's request this past December, and he revealed that Apple was working on tablet prototypes "sometime between 2002 and 2004." What's more, the documents contained some grainy but revealing photos of a tablet computer prototype known as the "035 mockup or prototype" which Jony Ive dates to that same early-2000's period.

The pictures themselves show a device remarkably similar to what eventually became the iPad in 2010, but with a significantly thicker body — it looks almost like the bottom half of an iBook attached to the more familiar iPad front. There's no "home" button to speak of, and there's a slit at the bottom that could be a marker for the iPad's eventual 30-pin connection port. While the design clearly changed over the ensuing eight years, it's pretty remarkable how much of the iPad's form factor was set in stone so long before it launched. While there's no screen size listed in these documents, it certainly appears to be quite close to the tablet that so many are using today. 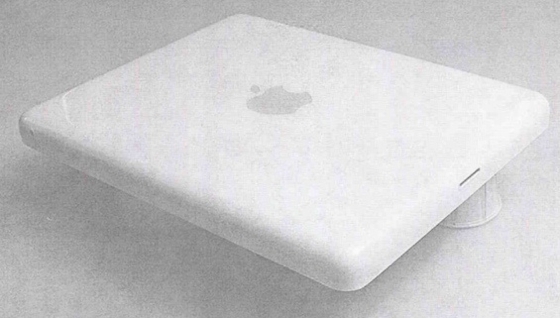 Update: Buzzfeed has uncovered a few more photos from the filing, including a direct comparison to the iPad 2.

Update 2: We've uncovered even more photos, including a direct comparison between Apple's prototype and the Galaxy Tab 10.1, and are including them in the gallery below.