Ayah Bdeir is the founder and CEO of a company that's very much based in the real world. LittleBits makes tiny, LEGO-like circuit boards that snap together to form rudimentary machines.

Share All sharing options for: LittleBits' electric LEGOs get supercharged with new cash

Ayah Bdeir took a job in financial services after she graduated from MIT's Media Lab, because she wanted to get out of school and back to reality. Big mistake. "I realized that wasn't really the real world at all," she told The Verge. "It was very removed from the real world. It was offices and PowerPoints." She decided to quit.

Now, several years later, she's the founder and CEO of a company that's very much based in the real world. LittleBits makes tiny, LEGO-like circuit boards that snap together to form rudimentary machines, from a coffee maker to a motion-sensored night light. Running a hardware startup tends to bring one down to earth. "We're dealing with the real world. We're dealing with shipping. We're affected by the price of magnets," she said.

A module consists of a circuit board built to do one thing. The magic is in combining them.

Ever since littleBits was just a prototype posted on her website four years ago, Bdeir has been getting inquiries from teachers, DIY-enthusiasts, and brands all over the world. LittleBits kits appeal to entry-level tinkerers because they are simple but versatile. The company makes 28 different types of pieces, called modules. A module consists of a circuit board built to do one thing: light up, vibrate, buzz, respond to pressure, and so on. The magic is in combining them. Air Ball, anyone?

Making the kits as user-friendly as possible is a top priority. Rather than organizing her modules into resistors, transistors, transducers, or double-pole switches, Bdeir came up with her own system. LittleBits makes four types of modules: "power," "input," "output," and "wire." It's meant to be more intuitive and accessible to people who don't have an engineering background, she said.

LittleBits is all about making things simple, but manufacturing the kits hasn’t been easy. (The Verge’s own Paul Miller first wrote about the company just as it was getting off the ground in 2008.) Bdeir started out hand-soldering the modules in her office in New York. Just the magnetic connectors that allow the modules to easily snap together took two and a half years to build, Bdeir said. "That's the difference with hardware products versus a software product," she said. "You want to iterate fast and there’s only so fast you can go when you’re making something physical."

In order to keep up with demand—and work on cool new modules like wireless connectors—littleBits recently raised $3.65 million from four well-known venture capital firms. The company had raised a seed round from angel investors including Joi Ito of the MIT Media Lab and Joanne Wilson, but it needed some serious cash to scale up. Had Kickstarter been around when littleBits started, Bdeir said she might have gone the crowdfunded route. But with a complicated physical product, it's probably best not to make promises to customers right away.

LittleBits had interest from more investors than it needed, Bdeir said, so she could afford to be picky. True Ventures, a Silicon Valley firm that focuses on early-stage companies, led the round. Firms participating included Lerer Ventures, another early-stage fund based in New York that usually focuses on media; Khosla Ventures, founded by one of the cofounders of Sun Microsystems; and O’Reilly AlphaTech Ventures.

With the money, the eight-person company plans to hire more engineers, improve the manufacturing and shipping process, and introduce 30 new modules over the next few month. A solar panel module, a rechargeable battery, and a sound recorder are on the way, Bdeir said. LittleBits is also expanding its education initiative, as the kits have proven popular with schools and teachers around the world. 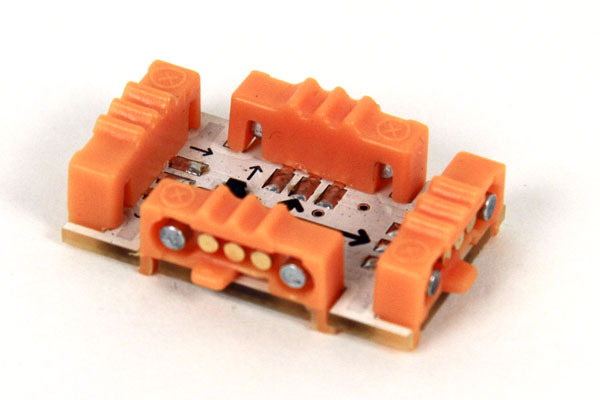 Even with the new funding, Bdeir is firmly committed to keeping littleBits open source. The design files are downloadable from the company’s website, and DIY hackers can post technical questions in the littleBits forum. The forums are sparsely populated, although a number of community-submitted projects are visible on the site. But the number of people interested at that level is growing, Bdeir said.

LittleBits is sold mainly through its website and a few online distributors. The kits are also sold at AC Gears, a gadget store in New York’s Greenwich Village.