Senator Al Franken, chairman of the Senate Subcommittee on Privacy, Technology and the Law, prodded witnesses today in a hearing on facial recognition technology, making pointed remarks about the potential of abuse by law enforcement officials.

Senator Al Franken, chairman of the Senate Subcommittee on Privacy, Technology and the Law, prodded witnesses today in a hearing on facial recognition technology, making pointed remarks about the potential of abuse by law enforcement officials and private corporations. Franken questioned FBI representative Jerome Pender on the possibility of abuse by law enforcement of the FBI's national facial recognition service at events like political rallies — the senator says that the FBI pilot "could be abused to identify protesters at rallies, and target them for selective jailing." While Pender assured the subcommittee that facial recognition is only used for appropriate "criminal justice purposes," other witnesses, like the EFF's Jennifer Lynch, cautioned that "Americans should be concerned about the extensive sharing of biometric data" by the government.

"I don't think this is a heavy lift, frankly."

In the first round of testimony, Franken also grilled a Federal Trade Commission representative on the agency's efforts to implement best practices for privacy with private groups. Franken says that companies should obtain a customer's consent before getting their biometric data. While the FTC says it is considering such measures, Franken sharply replied that "I don't think this is a heavy lift, frankly."

One such company that chooses to opt-in its users for facial recognition is Facebook. Franken questioned Facebook Manager of Privacy and Public Policy, Rob Sherman, on Facebook's use of facial recognition technology in its tagging feature. Following Sherman's testimony, Franken bluntly asked why Facebook doesn't turn its facial recognition feature off by default. While Sherman fumbled over his own repetitive comments about Facebook's opt-in nature, Franken called up a gigantic print of a Facebook privacy page, pointing out that the social networking giant doesn't mention "facial recognition" anywhere in its privacy settings, and that the system is not easy to use. 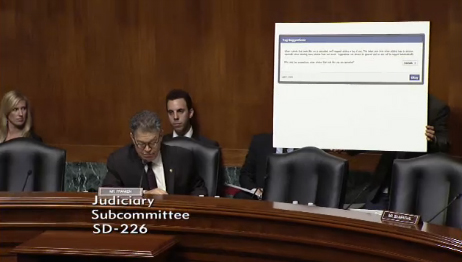 "I'll note that Facebook's competitor Google leaves its feature off by default."

Sherman says that "in terms of implementing choice throughout our site, we do a number of options. We think [opt-in for tagging] is the appropriate choice because Facebook is an opt-in experience. People join Facebook because they want to share with each other." Unsatisfied with Facebook's response, Senator Blumenthal repeated Franken's question, asking why the company doesn't permit an opt-in procedure for tagging — something members of the committee seem consistently concerned with.

While Franken delivered his questions and comments in traditional form — sarcastic and sharp — there's no guarantee Congress will take additional action with legislation on facial recognition technology. Franken has been on the warpath with companies like Facebook before, and he's been quoted saying that "privacy is casualty" of Facebook and Google's success. Still, unlike some other Congressional subcommittees, Franken's appears to be aggressively approaching technology issues with an interest in hearing from diverse stakeholders.