A series of charts showing RIM's drops in revenue, operating margins, and shipments over the past years.

Everyone knows RIM is in trouble: we've even written a rather sizable piece describing how it came to pass. But what do these declines in phone shipments, revenue, and operating margins look like compared to other phone companies? Analyst Horace Dediu has put together a series of charts showing how RIM stacks up, and it doesn't look good. The company had been steadily selling phones up until late 2010 or early 2011, until its shipments began dropping steeply and its operating margins dropped from around 25 percent to -25 percent. It's not the only company in trouble — Nokia is seeing similar drops in shipments — but as John Gruber points out, RIM doesn't even have a next-generation platform like the Lumia line to help it recover now that BlackBerry 10 has been delayed. 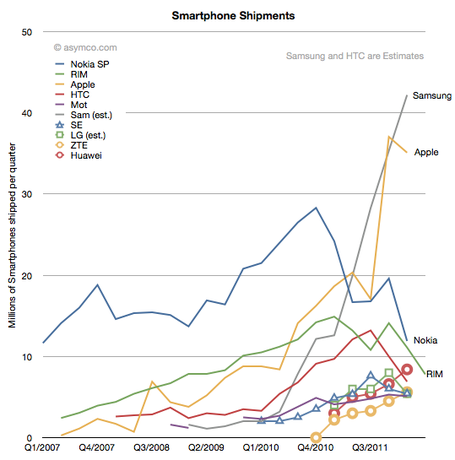