What's in your bag, Kimber Streams?

Share All sharing options for: What's in your bag, Kimber Streams?

What's in your bag? is a recurring feature where we ask people to tell us a bit more about their everyday gadgets by opening their bags and hearts to us. Show us your bag in this forum post. This week, we're featuring Kimber Streams.

When looking for a new piece of tech, my ultimate goal is to find something that works and is as future-proof as anything in this realm can possibly be. Sometimes I'm spot on, and sometimes I miss, but no matter what, I stick with it, for better or for worse.

While some of my colleagues have learned the mysterious and secret art of minimalism, you can clearly see that I failed that class. I carry an obscene amount of stuff around with me, and my bag weighs around 20 pounds. My excuse is that I commute about an hour or so into the office and would hate to be caught unprepared, so I choose to suffer the weight of a million things I’d rather have just in case. Oh, and my monster of a computer.

This laptop is my pride and joy. I’ll gladly take any flak I get for how gigantic it is, I’ll even make fun of it myself, but at the end of the day, I love the crap out of this computer. I bought it before my last year of college when my last laptop (whose brand shall not be named) proved itself to be a complete piece of crap. At the time I didn’t foresee needing a portable machine, so instead I bought the sexiest thing I could afford on a college student’s budget, and I regret nothing — my back might, though.

Since I play a lot of games, I figured I should have a gaming mouse, so here we are. It works great except for the rare occasion when the sensor picks up a piece of dust, makes the cursor jump across the screen, and causes me to miss skill shots and ruin the game for everyone. Aside from that, it’s a fantastic, comfortable, sexy mouse without a ridiculous number of extra buttons on the side. I’ve never used the wireless dock though, I don’t quite see the point of plugging in the dock when I could just plug in the mouse. Perhaps it’s just me.

You can’t hate on me for having a MacBook Air, but you’re welcome to hate on me for my severely outdated phone. I tend to hold onto phones for considerably longer than the 2-year contract, and as a result, this is only my third phone ever. Other than that, I have absolutely no excuse. I’m looking to upgrade it in the near future, because there’s only so much Gingerbread I can stand before I lose my mind and throw it out the window.

When I bought my enormous computer and discovered that my old Nintendo messenger bag wouldn’t quite cut it anymore, I went on a hunt for a bag that would fit this 17-incher. I wasn’t fully prepared to drop more than $100 on a bag that I didn’t love, and after digging around online I didn’t find anything that fit the bill, so I chose the acceptable and on-sale route. This Mobile Edge backpack has plenty of pockets for organization and some handy built-in space for flash drives and memory cards, but unfortunately my computer is still too massive to fit in the laptop sleeve. Also, the outside of the bag is pretty clingy and as you can tell from the photo, it loves to pick up assorted fuzzies and my housemate’s dog’s fur. On the plus side, it does fit the insane amount of things I drag around with me, and it’s incredibly comfortable — if it weren’t, I wouldn’t be walking a couple miles to the train station and the office in the middle of the summer. 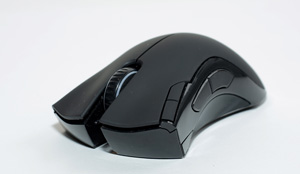 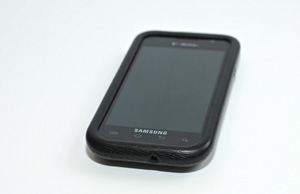 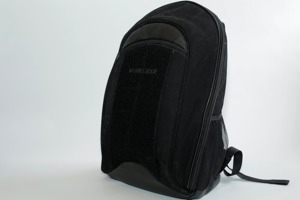 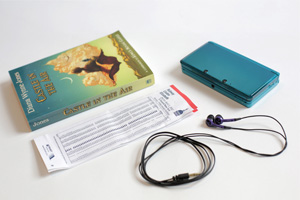 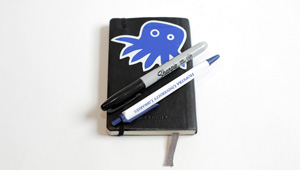 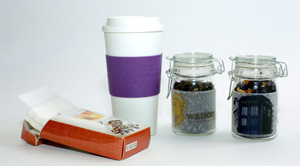 I commute into the NYC office from my home in New Jersey, and have a decent amount of time to myself on the train. For the ride, I bring along a pair of cheap iFrogz headphones, my 3DS with Pokemon Soul Silver, and a book. At the moment I’m reading the sequel to Howl’s Moving Castle by Diana Wynne Jones, who’s been one of my favorite authors since I was about seven years old and first picked up The Chronicles of Chrestomanci.

And why would I carry around something as ancient as a paper train schedule? Easy, New Jersey Transit’s website sucks on mobile, and I like to have it just in case I need to plan ahead but don’t have a computer handy.

Surprise, it’s a Moleskine! This notebook pretty much holds my entire life in its pages, with to-do and shopping lists, phone numbers and addresses, doodles and ideas. I got the Chumby sticker at Maker Faire last year, and he’s lived on the back of my notebook ever since. The pen’s from my college library, and it’s a minor miracle I haven’t managed to lose it yet.

Without a healthy balance of tea and seltzer I’m completely useless, so I make sure to bring the former with me when I head into the office. My teas of choice are spectacularly nerdy, and the ones I had with me on this particular day were TARDIS Blend and Watson Blend, based off the BBC shows Doctor Who and Sherlock. I have an embarrassing number of other blends at home (most of which are also from Adagio and created by Cara McGee) and I bring different flavors depending on how I’m feeling on a given day. All of these teas are looseleaf, hence the empty tea bags.

Can’t leave the house without my keys and wallet, which, like everything else I own, are extremely nerdy. I’ve had this Pac-Man wallet for years and it’s falling apart, but I’m not quite ready to admit that I need a new one. My keyring is home to a Lego Darth Vader and some Dragonball Z charms, as well as my house keys, a key to a storage unit I don’t have any more and a key to a house I haven’t lived in for five years. Perhaps I should take those off...

Now we’re getting into "just in case" territory. I carry an 8GB flash drive and a 16GB SD card with me at all times because they’re great things to have, and my bag has special pockets for them, so why not? As for the authenticator, I bought it years ago when I still played World of Warcraft, and I’ve had it on me since Diablo 3 came out. I’m just too lazy to set up the mobile version.

These last few items are the very definition of "just in case." The Dr. Pepper lip gloss is about the closest I come to wearing makeup, and the comb is great in case I get attacked by wind while I’m walking somewhere. The little black lump there is an extra pair of clean black socks, which may have proven themselves to be the single most useful item in my entire bag. I originally threw them in on a rainy day to change into after my feet inevitably got wet, but since, I’ve used them to clean my laptop screen, mop up small spills, and as an impromptu poster holder. I could also probably use them to rob a bank, as a garrote, or perhaps as a tourniquet when zombies attack. 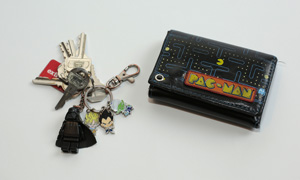 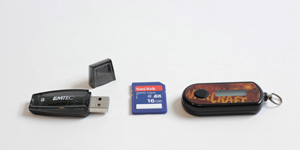 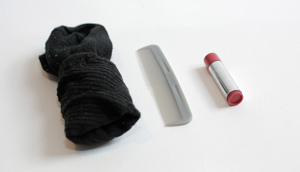