An alleged image of a new Canon mirrorless camera called the EOS M has sprung up on Japanese site Digicame.

There's no doubt that mirrorless cameras are on the up, but one company's been conspicuously late to the party — the world's largest DSLR maker, Canon. That's set to change soon if rumors are to be believed, as an image of a camera called the EOS M has sprung up on Japanese site Digicame Info, which claims it came straight from a retailer. The camera looks to use a new lens mount called EF-M, and is pictured with a 22mm f/2 STM macro lens.

The all-important sensor size remains unclear. Canon Watch's sources claim the EOS M will employ an APS-C sensor, but it's possible that Canon could reuse the slightly smaller 1.5-inch chip found in the G1 X. Otherwise it looks to be a small, simple, and accessible camera — there's no mode dial or viewfinder in sight, and the design is decidedly closer to the Nikon J1 or Panasonic GF5 than the enthusiast-focused Sony NEX-7 or Fujifilm X-Pro1. There doesn't appear to be a pop-up flash, either, though it does have a hotshoe mount. Of course, the image could turn out to be a well-done fake, but with the official reveal said to be coming on Monday we might not have long to find out.

Update: Well, Canon Rumors has added credence to this rumor by acquiring what appear to be actual photos of the EOS M. From the back we can see that the camera is indeed light on physical controls, and while it's impossible to tell the exact size of the sensor it does look to be pretty large. If this does turn out to be a real product, it would appear that Canon is taking the route Sony traveled with the early NEX cameras — minimal, beginner-friendly controls paired with hopefully high image quality.

Update 2: CanonPriceWatch has more renders of the camera, including the top and back: It appears to have stereo microphones and a three-way mode switch to jump to full automatic shooting or video recording. Thanks, intergalactic_turkey! 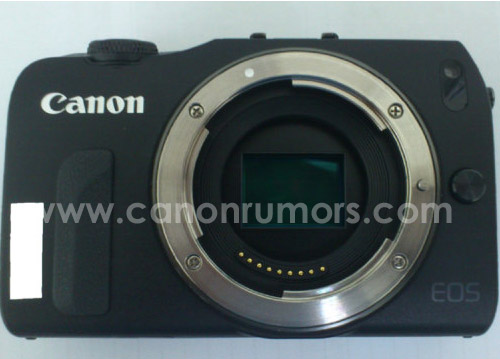 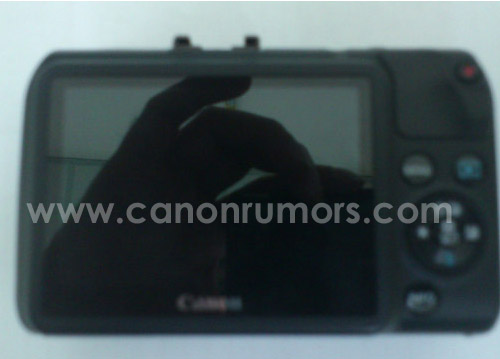