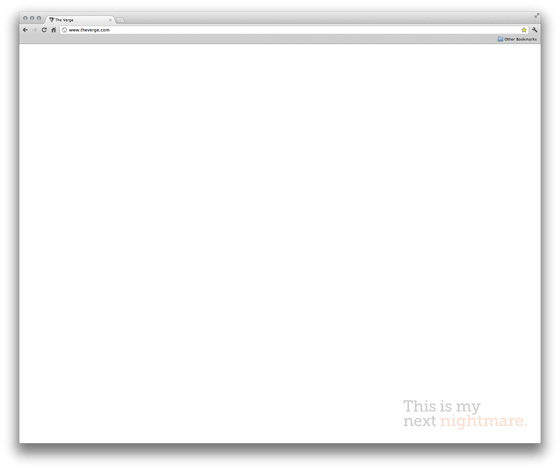 An actual demonstration of the bug in action (bookmarks concealed for competitive reasons).

I'd like to tell you a tale. A tale of the highest highs and the lowest lows.

It started two or three months ago, I'd reckon. Perhaps a bit more. Chrome for Mac, seemingly buckling under some invisible weight incurred after opening and closing several dozen tabs, would stop loading pages. Actually, that's not a fully accurate description: it would load pages, but they'd immediately disappear and be replaced with a blank white canvas once loading was complete. That's arguably more frustrating that not loading in the first place. Coworkers and colleagues started experiencing the same issue.

The problem would be solved — for a while, anyway — by quitting and reopening Chrome, but I'd audibly groan at the notion of it every time. Yes, Chrome preserves my tabs after a restart, but sometimes content has changed or disappeared since I originally loaded the tab. Sometimes I'm dealing with an unwanted form resubmission. It's just not good, and it's the last thing I want to have to think about halfway through a workday at a job where I live entirely in the browser.

What the F. All the time now, Google Chrome starts to load a page and immediately goes blank. Saw an unsolved bug listed in Chromium. :(

Haven't we been down this sad road before? Prior to Chrome, I'd abandoned Firefox years ago under similar circumstances: what had started out as a nimble, lightweight, easy-to-love browser (everything that Internet Explorer was not, at the time) had become buggier and more bloated with every passing version. But today, the thought of giving up Chrome is ten times worse — I use it on my desktop, my laptop, my tablet, my phone. It's everywhere. They're all in sync. I know where everything is, it's comfortable. It's the closest thing I have to a digital home.

@hyperballad627 I love Chrome. But there's a bug that loads a page, then goes blank. Plaguing other users for a while, but no fix.

Call me set in my ways, but I didn't want to abandon another browser. It's too big of a life change. Safari is weird, Firefox bogs down my Core i7 iMac, Opera is as unknown of an entity as ever. I Googled for fixes and came up empty.

Eventually, I discovered something that probably should've been obvious from day one: Flash seemed to be triggering it (or exacerbating it). Only pages with Flash embeds would "go white" on me. Disabling Flash felt great... for a moment, until I realized how dependent the web still is on this awful technology. MOG, Mixcloud, lots of custom video embeds required by dozens of publications (including this one). Killing Flash works great on mobile, largely because it never worked well on mobile and web designers have been accounting for a Flash-free environment on phones and tablets for years. On the desktop, it's a different story — and Adobe's development of Flash continues unabated, for whatever reason. Flash embeds regularly freeze my system solid for 5-20 seconds, but that's another story for another time.

So here's how I now spend my day: selectively toggling Flash off and on in chrome://plugins. When pages start flashing white, I go in and disable it. When I absolutely must have it for a particular page, I re-enable it and hope for the best. It's no way to live. (My colleague David Pierce has a slightly more elegant workaround, too.)

Consider this scary thought: the viability of the World Wide Web — the single most important component of the internet and likely the most important information product since the Gutenberg press — rests entirely on the stability of four applications. Four. Internet Explorer, Chrome, Firefox, and Safari. You could even argue that these are the four most important computer applications in the world. They're kingmakers. The internet lives and dies by them, as sure as Chrome shows me a blank, white page when I try to visit The Verge.

Two, perhaps three builds on Chrome for Mac's release channel have gone out to users since this problem started. With each one, I've crossed my fingers that it's solved, only to have my hopes dashed a few tabs later.

Google: solve this. Chrome is too important to the health of the internet for this to be anything other than a severity one issue. If Flash is mucking something up in a way that you can't solve in Chrome alone, drop Flash from your release channel until Adobe gets its act together. It'll hurt (I'll feel it as much as anyone, trust me), but desperate times call for desperate measures.

We're steadily working toward a Flash-free world — I think Adobe knows this in its heart of hearts as much as anyone — but we're not there yet.