Rdio is continuing to roll out new features, adding notifications and the ability to set custom artwork for playlists to its web and desktop apps.

Share All sharing options for: Rdio rolls out new notification system and custom artwork for playlists

Last month music streaming service Rdio unveiled a minimalistic redesign of both its desktop apps and web client, and it's continuing to iterate with the addition of two new features: notifications and the ability to create custom artwork for your playlists. The notifications system works like you'd expect; a bell in the upper right of both the web interface and desktop apps displays a number circled in red, letting you know when somebody has begun following you, shared something with you, or when one of your playlists is tweaked or has a new follower. It will also let you know when any of your friends on Facebook or Twitter have joined the service, making it a little bit easier to expand your Rdio network.

For playlist fans, custom artwork is a small but welcome addition. Previously, the service would create a collage of album artwork based on the songs in any given playlist. Now you can assign your own image — say, the logo for The Verge — to give it your own stamp (the custom artwork also displays in the Rdio Android app, though it appears iOS users will have to wait for the moment). Both features are available now. 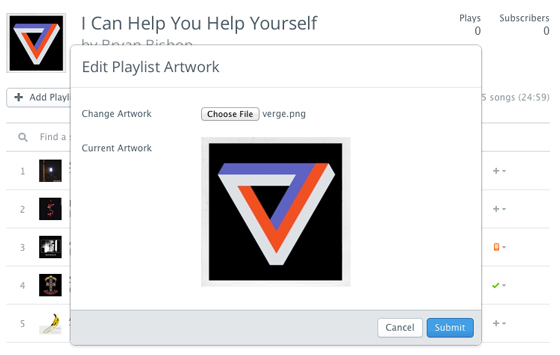