Hands-on impressions of Solar, a new weather app for iPhone.

Weather apps, in my experience, tend to fall into one of two categories: the simple, static screens that show the current climate without much heed to depth or function, and the complex barrages of information with an interface only a meteorologist could love. It's been somewhat refreshing, then, to use Solar over the past few days — it's a new weather app for iPhone that blends an attractively minimal design with an intuitive and useful UI.

Reminiscent of nothing so much as Windows Phone

Open the app and you're presented with a sparse screen displaying the time, temperature, location, and a description of the current weather in white text set against a shifting abstract background. Sunny days pulsate between red and orange, raindrops drizzle or pour from the top of the screen depending on the day's precipitation, and all these effects subtly move in accordance with your device's orientation. Double-tapping the screen brings you out to a menu where you can select from different locations, and the effect of colored rectangles against a black background with white circular icons is reminiscent of nothing so much as Windows Phone. 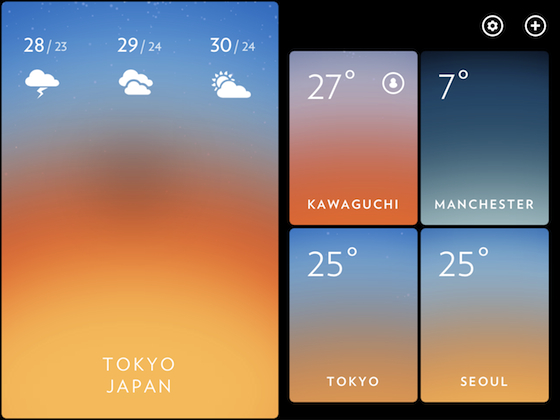 From the main weather screen itself, you basically have four more options: swipe up, down, left, or right. The latter two gestures simply take you between saved locations, but the vertical movements are all about bringing new information to the screen. A downward swipe will cause a three-day forecast to drop from the top of the display, showing the upcoming highs and lows along with a representative icon — the only time you'll see traditional weather symbols used in Solar. Swiping upwards, meanwhile, lets you shift the weather screen to any point in the next 24 hours at your own pace. This is a great way to check whether it's worth bringing an umbrella along before leaving the house, for example. The thing I like about both these gestures is that they snap you back to the standard display as soon as you lift your finger off the glass, which gives the app a very responsive and efficient feel.

Unlike apps such as Dark Sky, Solar isn't doing anything particularly interesting with the weather prediction itself; its data comes from Weather Underground, which has its own free app. The reason to use Solar is its interface and intuitive control, both of which beat out any comparable iPhone app I'm yet to see. If you want an app to tell you granular details such as wind direction and the level of humidity, Solar won't be for you, but if you simply want to check the temperature, see if it's going to rain soon, or find out the forecast for the next few days then I think it's a great choice. It's available now in the App Store for $0.99.