Astro cuts the cables with its first product under its new parent company, Skullcandy, but does it meet fan expectations?

In a market dominated by names like Turtle Beach and Tritton, Astro Gaming has established a reputation as a boutique purveyor of premium gaming audio products, beloved by enthusiasts and professional players alike. But after a quiet acquisition by Skullcandy last year, Astro has been working to bring its high-quality audio line to the masses with its first integrated wireless headset — the A50 wireless headset. With large, around the ear enclosures, KleerNet 5.8GHz wireless connectivity, Dolby 7.1 simulated surround sound audio, an integrated lithium-ion rechargeable battery, and a price of $299.99, the A50 is Astro’s most advanced headset to date. But has Astro delivered the high level of performance and quality fans have come to expect without the hindrance of mass retail limitations? Read on and find out.

Gaming headsets aren't known for being particularly sophisticated in terms of design, and while it does bear a more distinct style and finesse than most, the A50 is no exception. It features a bulky plastic chassis with an all matte-black finish, seemingly maintaining the dark and ominous aesthetic beloved by most gaming hardware makers. It stands apart, however, through its use of cutaways, swiveling earcups, and metal extension posts, which provide a unique look and feel, while reducing its overall weight and offering a larger degree of flexibility and comfort.

The A50's floating earcup design allows the earcup padding to align and conform to heads of any size and shape. Despite having a fairly tight enclosure around your ears, the padding is soft and breathable, providing decent airflow during lengthy gameplay sessions. If you ever need to give your ears a rest, the earcups can be turned 90 degrees and rest the earcup padding comfortably on your shoulders. At 363 grams (0.8 pounds), the A50 is plenty hefty, though the weight is distributed in such a way that it's not particularly noticeable or fatiguing during use. The bulk of the weight is localized around the earcups, which house the onboard battery, wireless receiver, and playback controls. By building the onboard electronics into the earcups, Astro ditched its signature magnetic speaker tag system, which would allows users to swap out and personalize the outside panels.

But the question on many people's minds, however, is whether or not the A50's build quality suffers as a result of Astro's new owner, Skullcandy. Much to my surprise, the A50 seems to use the same caliber of materials found on my pre-acquisition A40 headset. Astro has even been able to preserve its exceptional packaging, though it has ditched its weightier print materials and other extras, like the molded carrying case that came standard with its other products. Of course, the A50 does come with all essential cables, as well as a cheap and somewhat ugly plastic stand, which most will probably toss shortly after assembling. 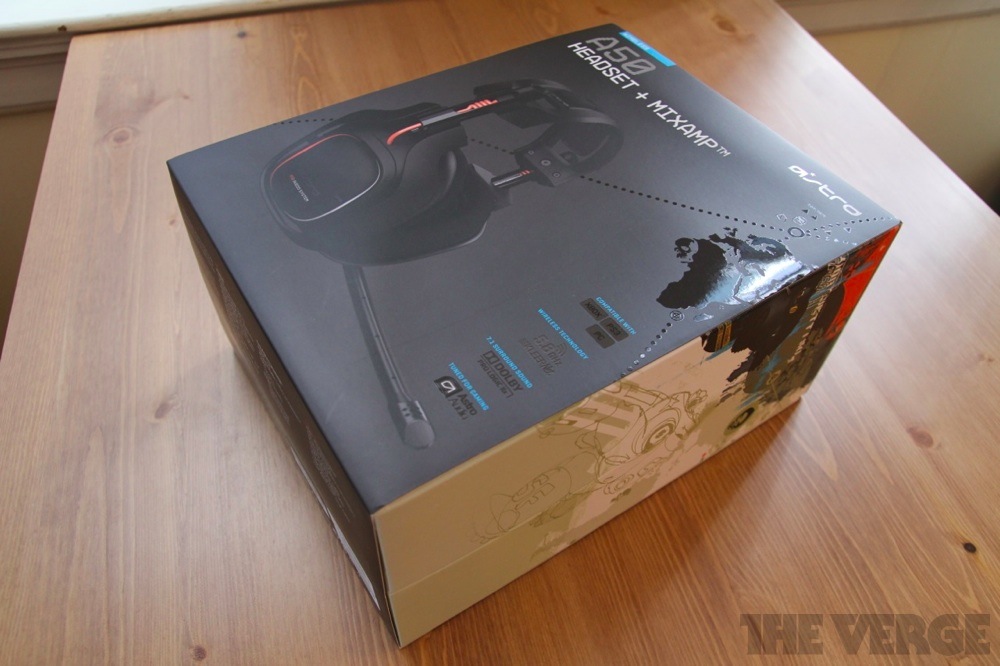 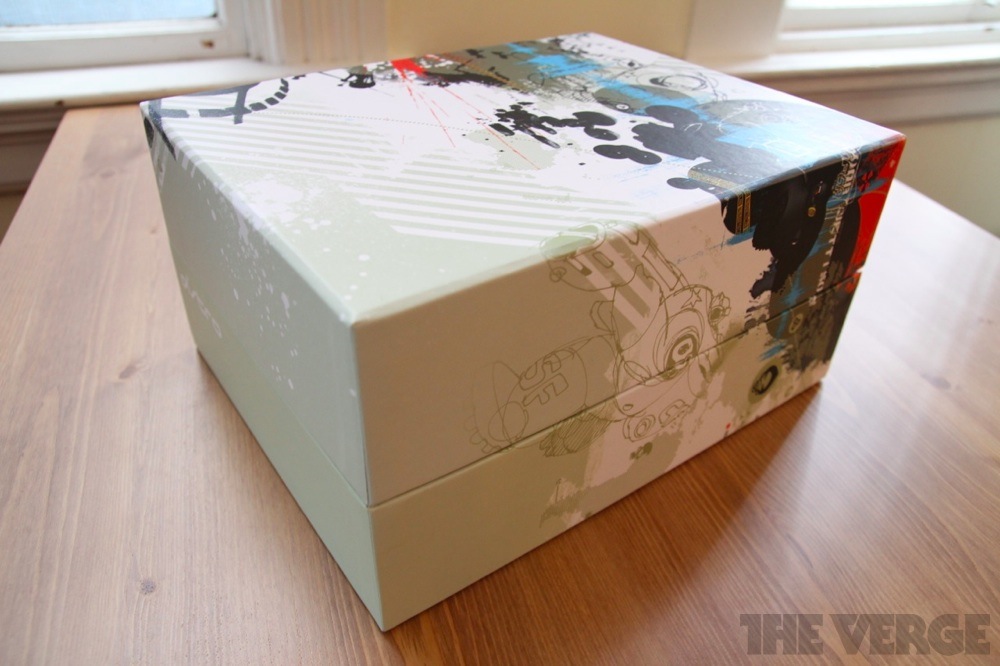 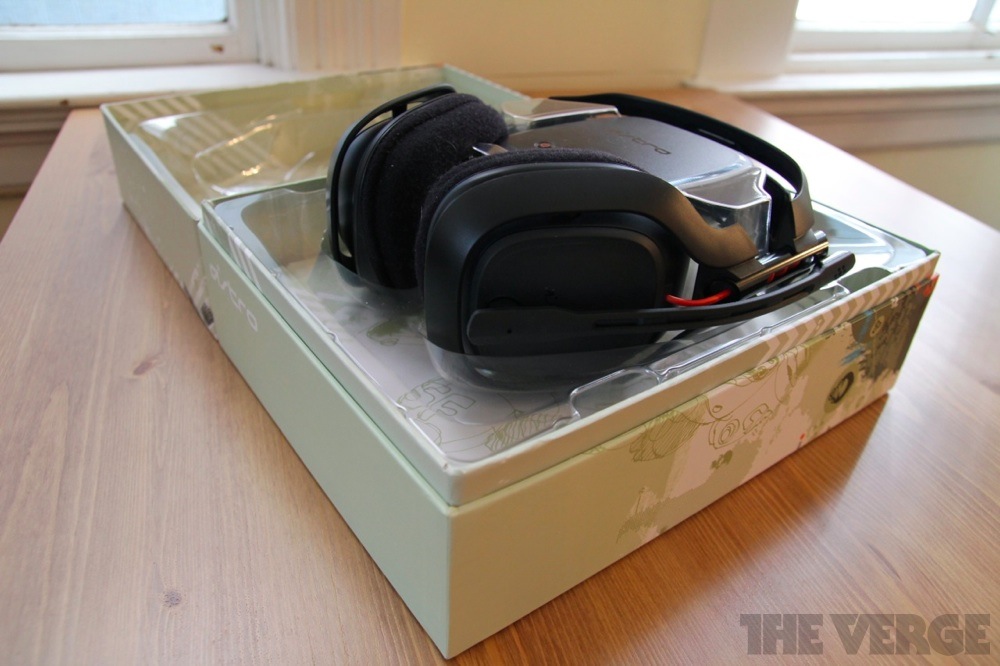 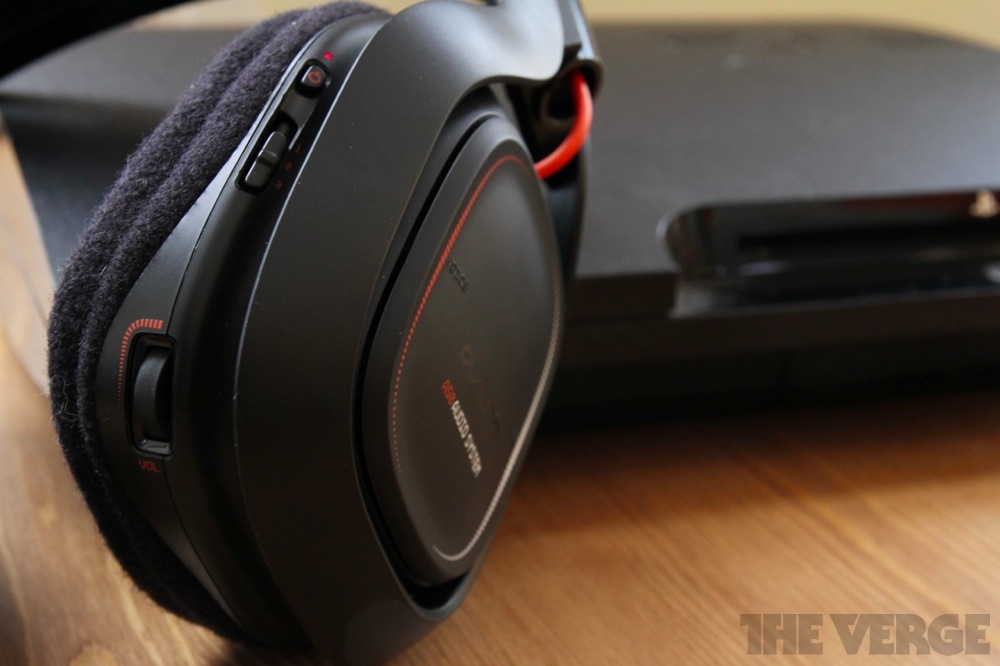 Setting up the A50 is notably painless. The headset comes with a small transmitter that houses the surround sound processing unit, optical input and output, an auxiliary 3.5mm jack for iPods or other media players, and a USB port for power and PC connectivity. With its optical audio passthrough, the base station can be integrated with any home theater receiver or connected to a single source. Up to four A50 headsets can be paired with a single base station, providing simultaneous multichannel audio to each. Linking one or more A50 headsets with the base station is as simple as pressing and holding the power button on each, which initiates a brief pairing mode.

Astro has done a fantastic job of integrating all of the core functionality of its previous products into the A50, namely the voice and gameplay volume mixing feature found on the MixAmp and MixAmp 5.8 wireless adapter. In fact, the interface is even simpler than the wired equivalents, separating the primary controls from a mess of cables and keeping them in close reach. Overall volume is controlled by a small dial on the base of the right earcup, and instead of a dedicated chat volume dial, Astro has made the entire right face of the A50 a two-way button that controls the balance between gameplay and chat or auxiliary source levels. The mixing system allows users to make on the fly adjustments without having to feel around for small, indistinguishable dials. To make adjustments to gameplay or chat audio, just tap or hold the left or right side of the earcup backplate. The earcup base also includes a jack for the cable that runs to the Xbox 360 controller, a micro-USB port for recharging, a power button, and a three-way switch that toggles between the A50's three audio presets.

The design lacks a dedicated microphone mute switch, but in its stead, the A50's swiveling boom microphone is deactivated whenever it's placed in the upward position. In terms of chat quality, the A50 uses a flexible boom microphone similar to the A40, though it cannot be removed. The microphone delivers crisp, clear voice capture, but uses a secondary outward facing microphone to filter out ambiant noise.

For wireless connectivity, the A50's use 5.8GHz KleerNet technology, which is found in a number of other premium audio products and offers exceptional range. Despite my testing environment featuring a wide array of other wireless devices in active use, I experienced no signal degradation, cutouts, or other unsavory feedback. The A50 maintained a strong connection at sizable distances, operating at peak performance even when standing 40 feet away base station and even when separated by several dividing walls. Battery life is also remarkably good, with the A50 achieving roughly 11 hours of use on a single charge during our testing. A full recharge takes about two hours, though the battery can also be replenished during use by connecting the headset to a console, PC, or other powered USB port. 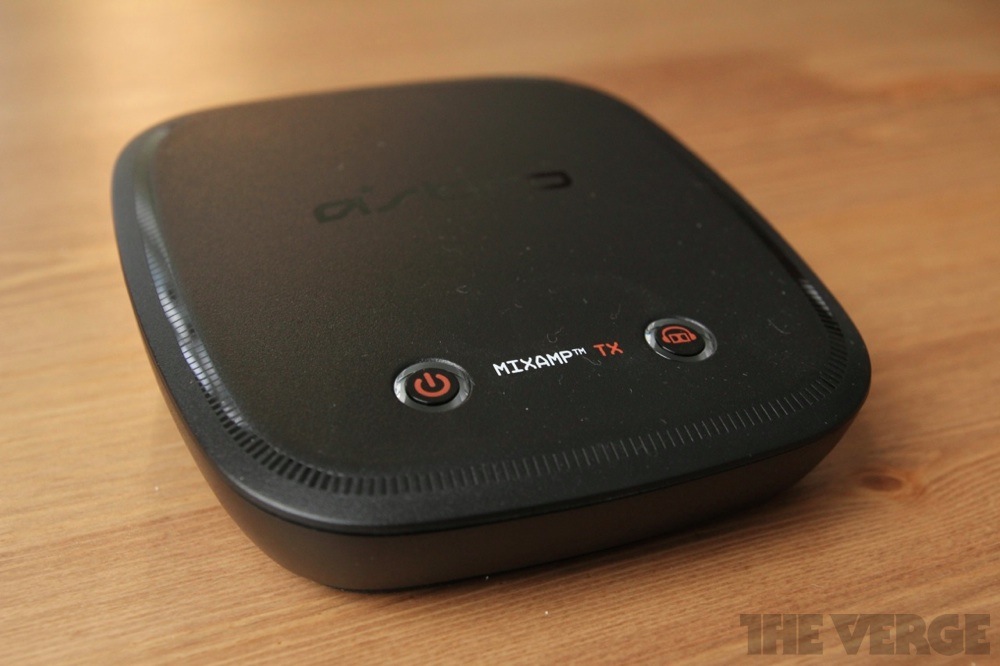 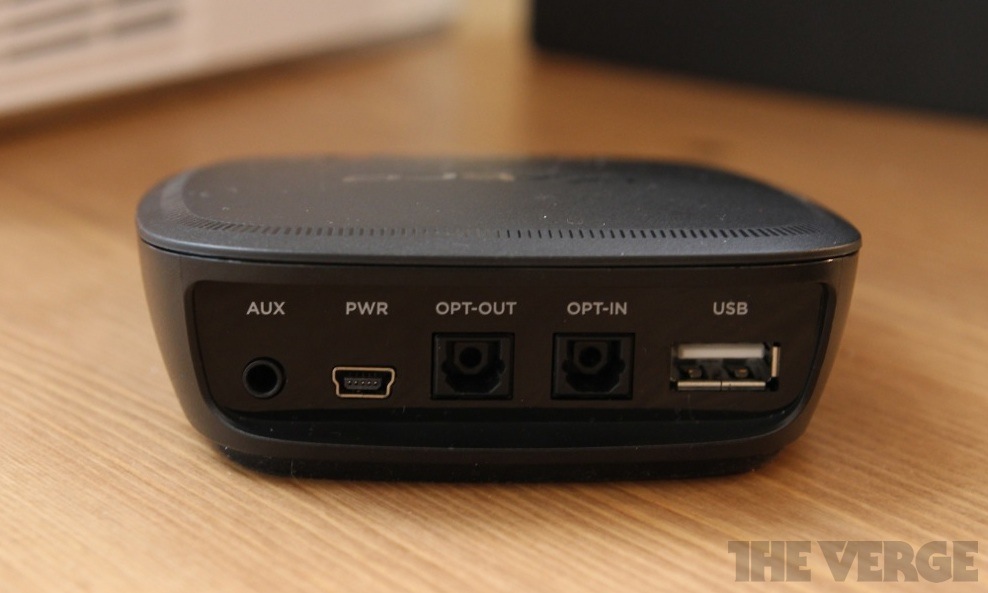 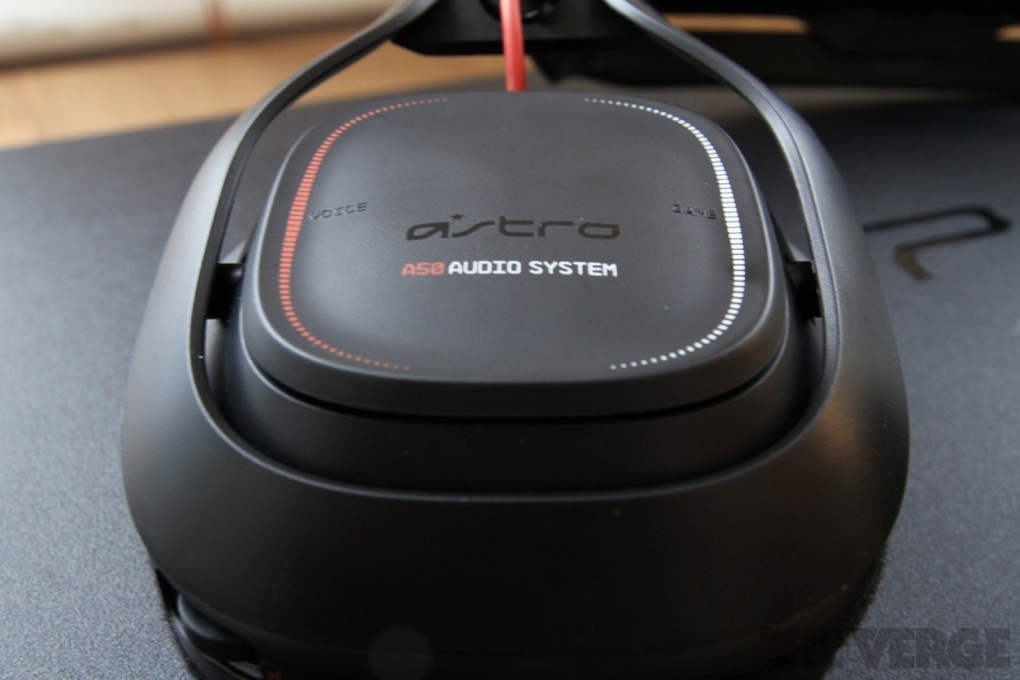 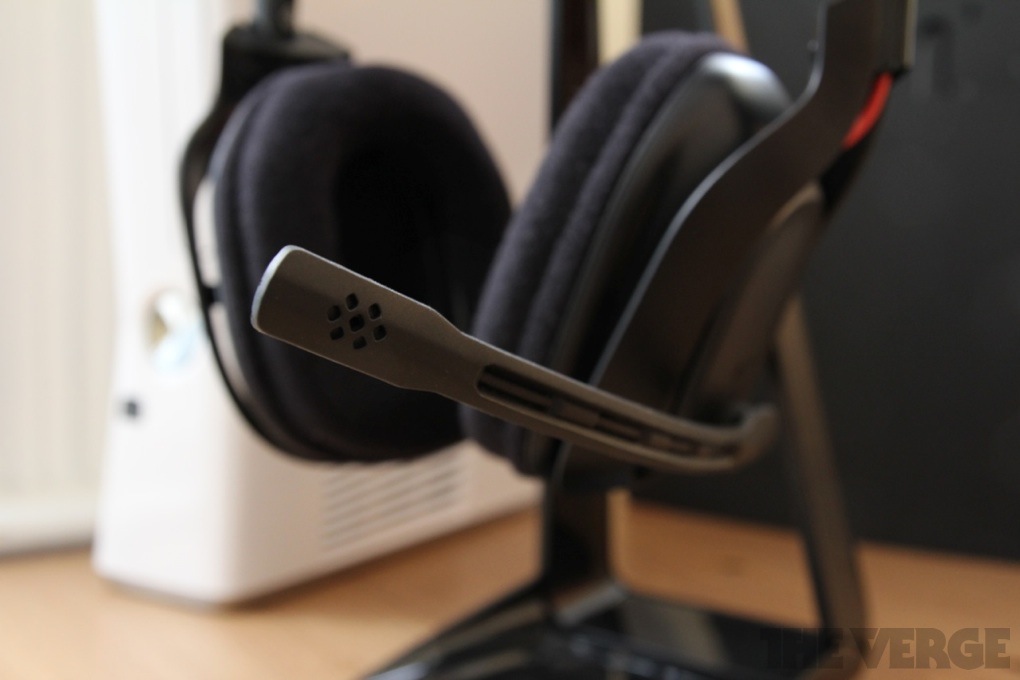 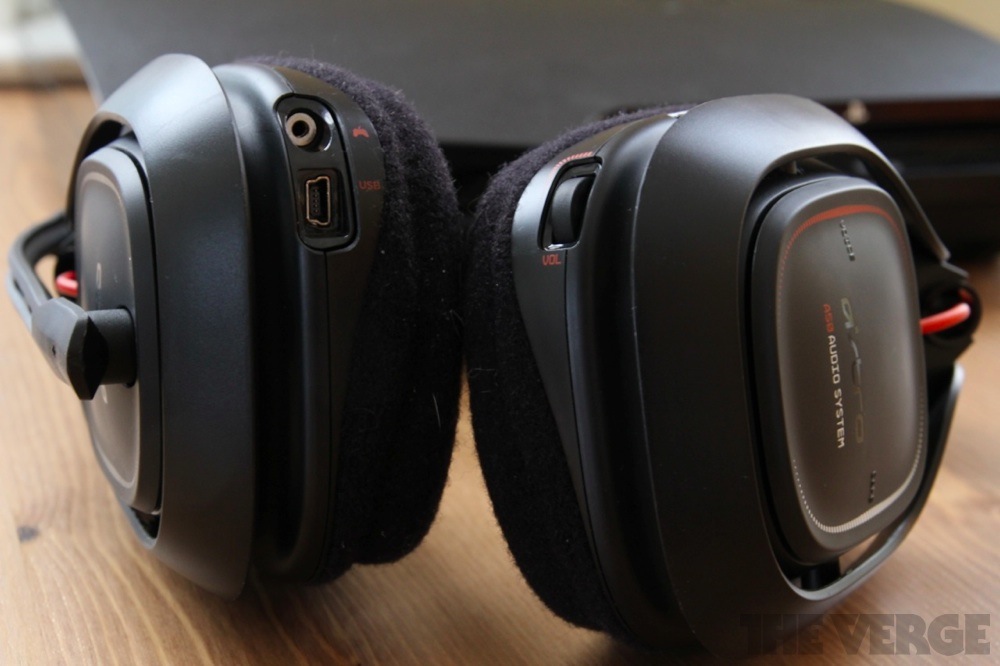 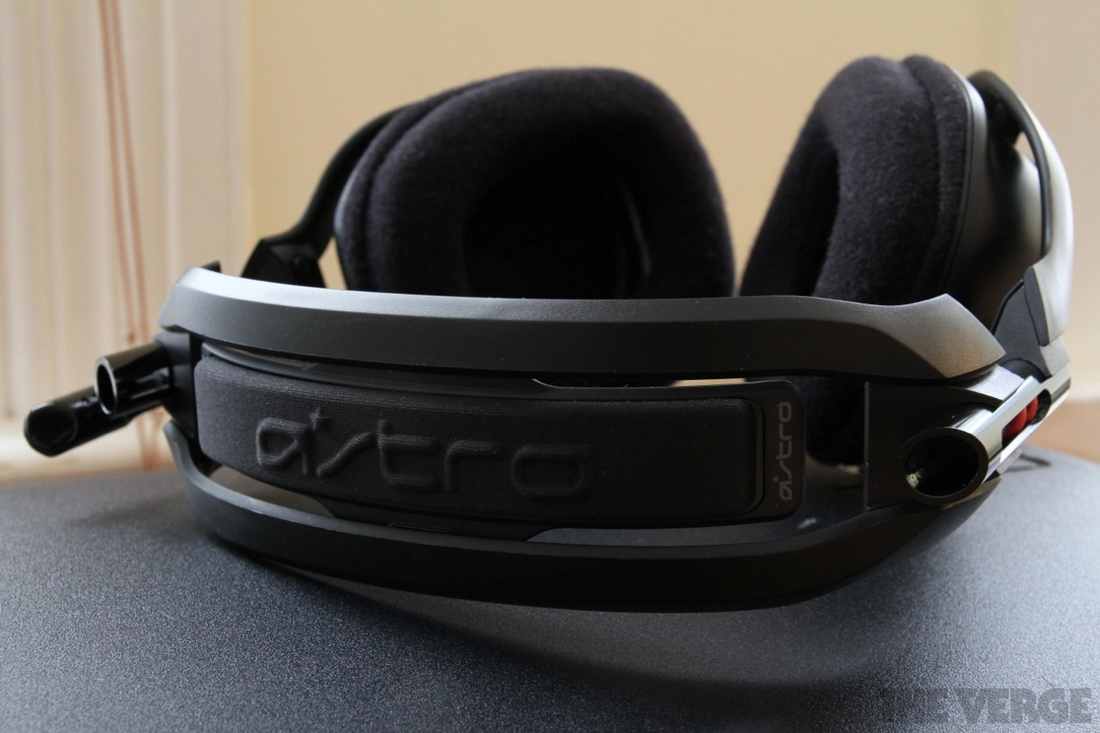 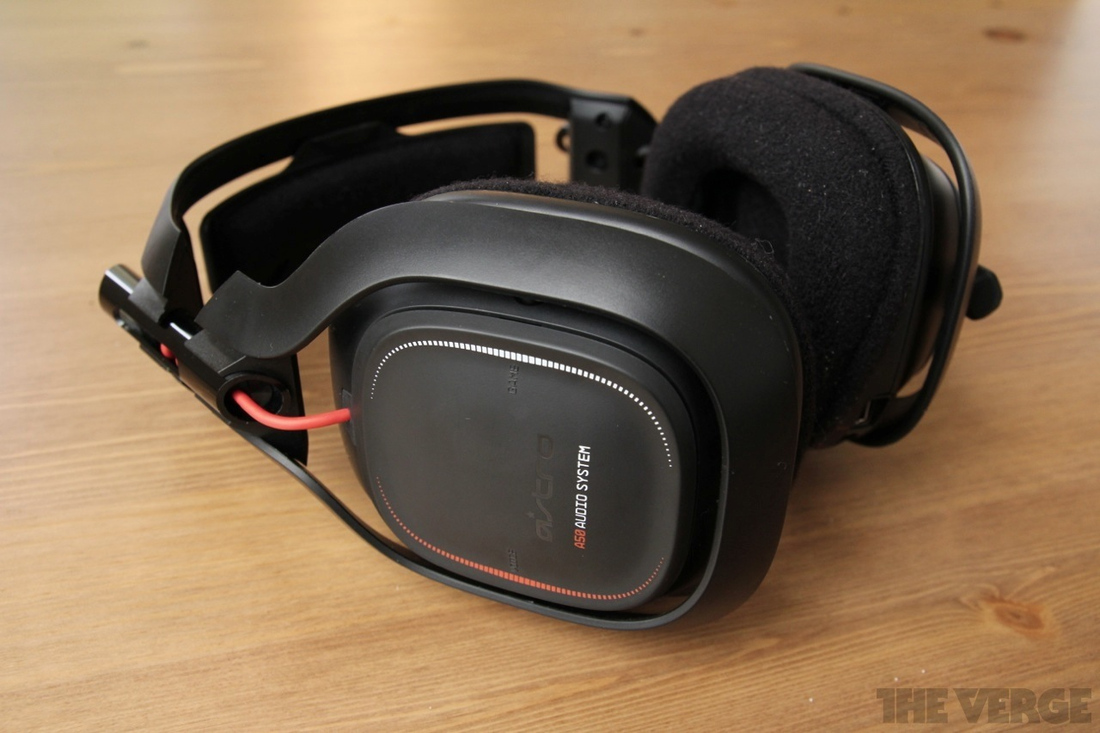 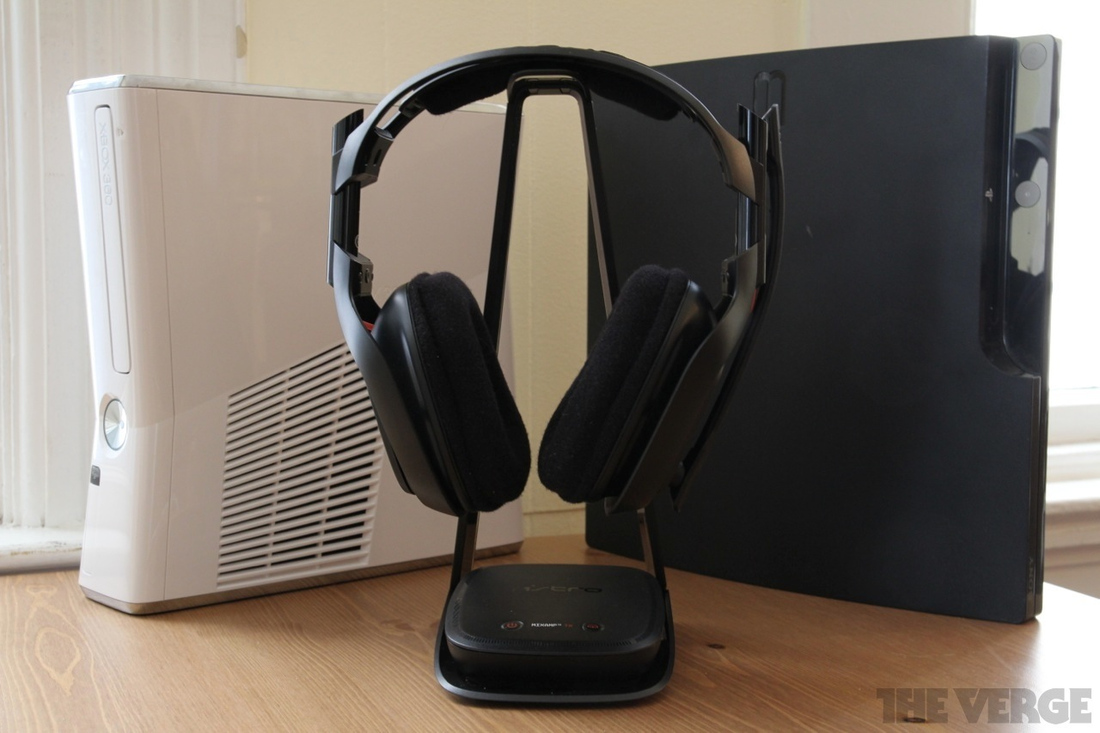 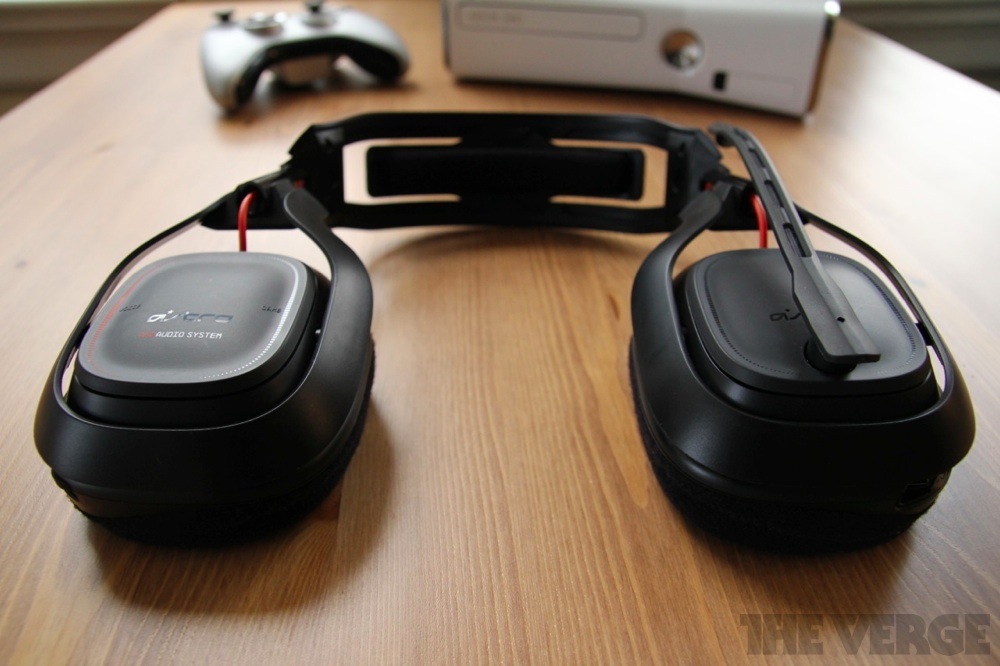 Astro's headset range has been praised for its sound quality, but the A50 may be the company's most versatile and best-sounding product yet. With beefy 40mm stereo drivers that deliver tight low-end response and crisp highs without crushing mid-range frequencies, the A50 delivers tremendous detail and depth. But with three different sound presets, users can go beyond the A50's native tuning with two additional presets accessible by the three-way switch located on the base of the earcup.

The A50 is at its best in shooters like Call of Duty: Modern Warfare 3 and Battlefield 3, producing a visceral bass kick as round after round is fired and picking up the sounds of nearby footsteps of enemy combatants. Spatial awareness is probably the biggest benefit of using a headset during competitive play, and the A50's Dolby 7.1 simulated surround sound does a great job of giving a clear sense of where sounds are originating from. With surround sound enabled, I was frequently able to detect an enemy player approaching from behind and take them down first. But the A50 also enables a world of detail and immersion in more atmospheric titles, like Mass Effect 3. Walking around the bridge of the Normandy will showcase all sorts of nuances you've probably never noticed before, like the hum of control stations and the conversations of AI crew members.

But given the A50's wide array of connectivity options, it's also great for other multimedia applications, like watching Blu-rays late at night without disturbing the neighbors. While I'd be reluctant to consider the A50 a replacement for a 5.1 or 7.1 surround sound system, it's a more than capable substitute for times when a full speaker setup would be unruly. The A50 delivers clear, discernable dialog amongst the sonic chaos of movies like The Dark Knight or Mission Impossible 4. Performance for music playback is equally satisfying. As a fan of electronic music, I loved being able to catch otherwise subdued synth lines in songs by Skrillex, The Glitch Mob, and others. The same could be said for more traditional fare, like the rich, diverse tones in uncompressed tracks from Revolver and Led Zeppelin IV.

As far as noise pollution goes, the A50 lacks active noise cancellation and subsequently isn't quite as adept at blocking outside noise as other headphones. Still, its thick padded earcups isolate the user pretty well, especially when the volume is set to a decent level. When higher volumes are reached, the A50 also struggles to contain audio. At 60 percent volume or more, the A50 can be heard by others nearby, though it's still considerably less intrusive than a full speaker setup.

Of course, the A50 isn't the only surround sound headset on the market. In fact, there's plenty and many that can be acquired for far less cash. But while many brandish advanced wireless features and sound processing modes, few seem to grasp the fundamental basis for a good pair of headphones — quality drivers and well-designed enclosures. Astro has always built their products on that solid foundation, and the A50 is no exception.

Our review of Astro A50 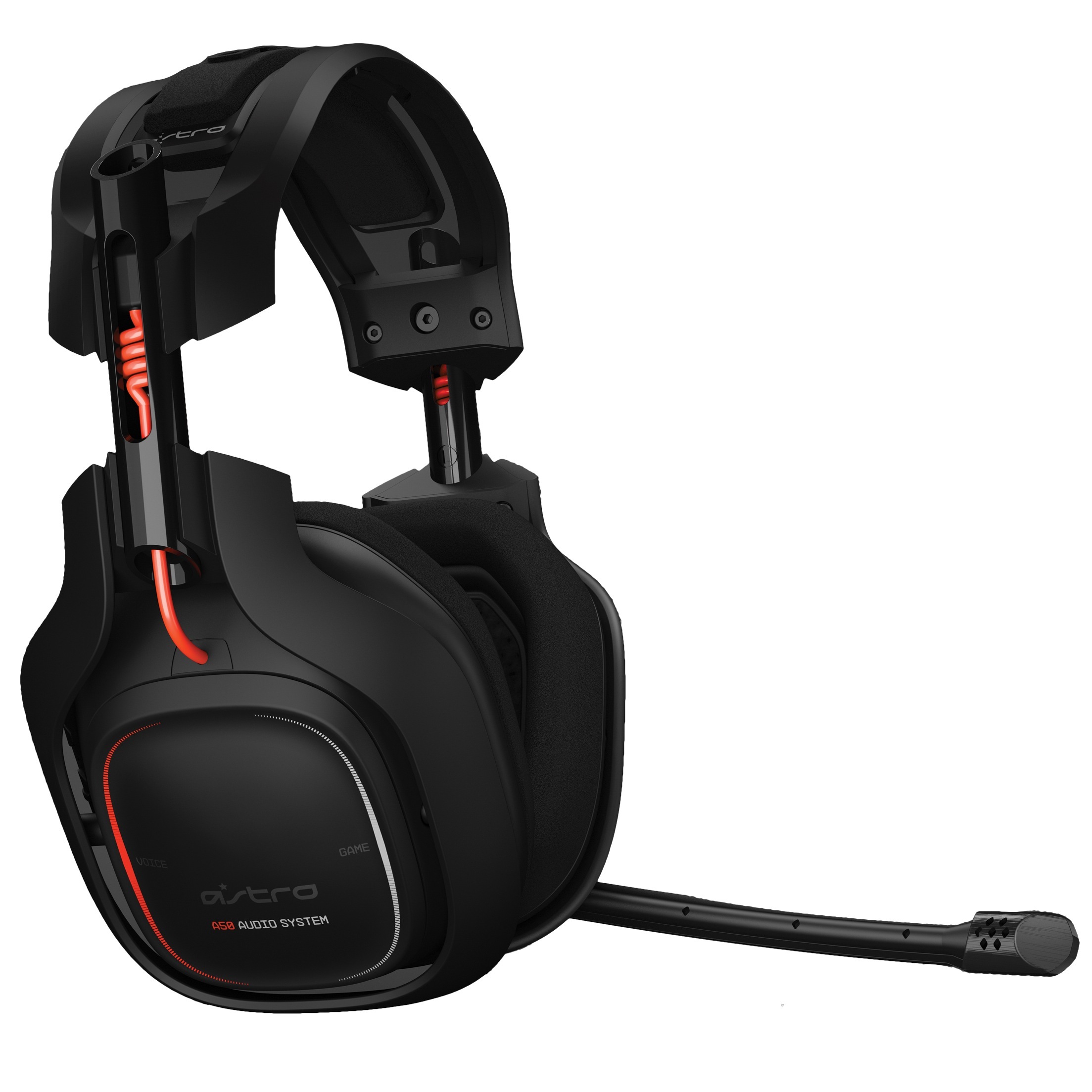 The best gaming audio for those that can afford it

The Astro A50 is, without question, one of the best gaming headsets on the market. It offers rich, immersive Dolby 7.1 simulated surround sound audio that adds incredible levels of detail to games like Mass Effect 3 and a competitive edge for shooters. With integrated 5.8GHz wireless connectivity and a simplified control scheme, it is effortless to set up and operate. Though the bulky design leaves something to be desired, it reamins one of the better looking headsets in its class. At $299.99, the A50 costs as much or more than most current-gen consoles, which will undoubtedly be a barrier for many. But the cost is put to good use, producing category-leading sound that will change the way you play. If you have the cash to spare and love games, the Astro A50 is the way to go.

Blizzard will bring back BlizzCon in 2023