Canon released the EOS M today, the first in a new line of small digital cameras for the company.

Nikon has the J1 and V1, Sony has the NEX line, and Olympus and Panasonic share the Micro Four Thirds spec. Canon's been conspicuously absent from the list of mirrorless camera manufacturers for a long time, but the company's finally thrown its hat into the ring. After a number of informative leaks, Canon officially announced the EOS M today, a new camera combining an APS-C sensor, broad lens support, and a body that could hide inside most other cameras with those specs.

Broadly speaking, the EOS M is just a repackaged Rebel T4i — it shares nearly all its specs with Canon's entry-level DSLR. It has an 18-megapixel APS-C sensor, the same as the T4i. It's powered by Canon's latest DIGIC 5 processor, can shoot 4.3 frames per second (but only in a single mode), and offers ISO range up to ISO 12,800 and expandable to ISO 25,600. All that comes in a small magnesium body, which in our time with the camera is both impressively light and quite sturdy — though it's not exactly eye-catching. There's not much of a grip for your right hand, but with a lens attached it's easy to hold; it's also far closer in size (1.2 inches thick) and weight (14 ounces with a lens) to the S100 point-and-shoot than to most DSLRs, and feels right in line with Sony's NEX-F3. 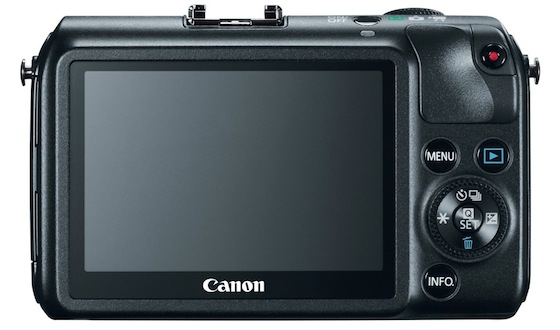 It's a T4i hiding inside a point-and-shoot

"Video will be the real strength of this camera," reps told us. It shows: the EOS M will shoot MPEG-4 videos (as .MOV files) in a variety of framerates, including 1080p at 24, 25, or 30 frames per second. It offers Canon's Movie Servo AF, which gives users continuous autofocus while recording video. The hybrid system combines both phase-detect and contrast-detect autofocus to deliver fast, continuous autofocus in almost any mode, and was one of the most impressive new things about the T4i. The EOS M also has stereo mics plus an input for an external mic, and there's on-camera audio monitoring as well.

There's plenty of manual control offered while recording video, and a 3-inch, 1.04-million-dot LCD for viewing your footage. Unfortunately the screen doesn't rotate or tilt, which is surely a space-saving measure — but it's also another differentiator for the T4i. The LCD is a touchscreen, and is the home of nearly all the EOS M's settings and controls. There are few dials and buttons on the device itself, which will certainly be a turnoff for some, but the touchscreen is excellent, responsive and accurate even on very small touch targets. 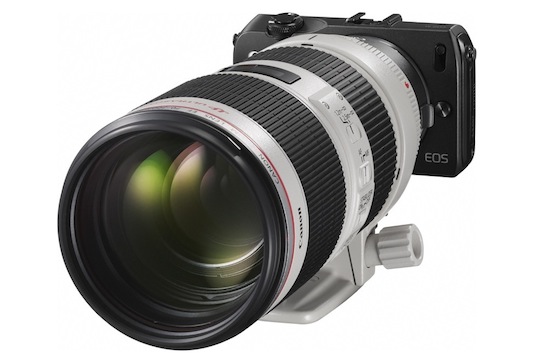 For everything it offers, the EOS M is still mostly a video camera

The camera itself is impressive, but its new accessories are its true trump card. Most important is the Mount Adapter EF-EOS M, which every EOS M buyer will want: it makes the EOS M's EF-M mount compatible with all of Canon's EF and EF-S lenses, giving you access to a lineup that absolutely dwarfs any other mirrorless camera's selection, and Canon promises no functionality or quality will be lost. Canon's also releasing two new lenses, the EF-M 22mm f/2 STM (the kit lens for the EOS M) and the EF-M 18-55mm f/3.5-5.6 STM. "STM" stands for Stepping Motor, and when paired with the EOS M (or the T4i) provides blistering fast, dead silent focusing. We got to test the STM lenses with the T4i and again with the EOS M, and the combination is pretty remarkable.

When we met with Canon, reps were careful to note what the EOS M is, and what it isn't. In the US, the company is positioning the EOS M as a video-first camera, designed to be something of a companion tool for videographers and cinematographers much the same way the G1 X is designed for pro shooters who want something smaller than their DSLR. Since it lacks a viewfinder, reps said, it doesn't provide the same still photography experience as a camera like the T4i. Without the controls and ergonomics of a DSLR, it's also not as fast to operate. Canon's not even calling the EOS M a "mirrorless camera," lest buyers be confused into thinking it's a NEX or Micro Four Thirds competitor. Though the camera's clearly capable of the same functionality as a NEX-F3 or an Olympus OM-D E-M5, Canon imagines a different user, one much more focused on video. If you want to step up from a point-and-shoot, reps said, buy a T4i.

To that end, the EOS M will only be sold in specialty stores like B&H, where there's more guidance for camera buyers. Canon's clearly worried about cannibalizing its own products — the G1 X, T4i, and even S100 all share some key features with the EOS M — but undersell or not, the EOS M should handle both photos and video just fine. 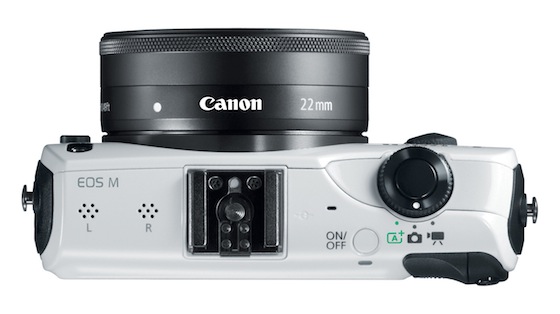 In Japan, the EOS M will be marketed very differently

Elsewhere in the world, the EOS M comes with a much splashier release. It'll be among Canon's most-promoted (and, the company believes, best-selling) cameras in Japan, beginning with a party for its launch. But Canon's sensitive to its individual markets, and given that the mirrorless camera industry is relatively small in the US, the company's taking a more cautious approach.

All of Canon's new products will be available in October (September in Japan), with pre-orders already appearing on B&H and Amazon. The EOS M and 22mm STM lens kit will cost $799.99, and will be available in black and white, though the white version will only be available online. The 18-55mm STM lens will cost $299.99, the mount adapter $199.99, and a new Speedlite will be $149.99. We'll be waiting to get our hands on an EOS M before we can say for sure, but thanks to wide lens compatibility, excellent specs, and potentially unmatched video prowess, Canon's new small camera might actually be huge.

Update: We have additional impressions, images, and video in our hands-on preview from the Tokyo launch event.