We take a look at Canon's EOS M mirrorless camera, the company's first. In addition to an APS-C-sized sensor, the camera offers full backwards compatibility with the company's EOS lenses using a separate EF-EOS-M adapter.

At Canon’s EOS M launch event in Minato Ward, Tokyo — just around the corner from Sony’s headquarters — the world’s largest camera maker is giving 500 or so members of the press their first look at its new mirrorless camera. Like Sony’s NEX offerings, the EOS M has a large, APS-C-sized sensor, and is fully compatible with its manufacturer's back catalog of lenses via an add-on adapter. Today, we got a chance to put the camera through its paces a little bit with the two EF-M mount lenses it's launching with (the 18–55mm f/3.5–5.6 zoom and the 22mm f/2 pancake) as well as with a few of the company’s more renowned EF lenses like the 24–70mm f/2.8 and 70–200mm f/2.8, getting a little more time with the new camera than we had the first time around.

When we picked up the EOS M, our first impression was "this feels like a PowerShot." Despite being headed further upmarket, everything from the design language to the control scheme very closely mirrors the company’s point-and-shoot lineup. Comparing it to the competition, it feels a little thicker and heavier than Sony’s NEX–5N, but isn’t noticeably bulkier (photo below). Importantly, it isn’t any more or less pocketable than Sony’s offerings, and not so much heavier — 0.58 pounds for the EOS M body versus 0.46 for the 5n, and 0.81 pounds for the EOS M with its 22mm pancake lens, versus 0.61 for the 5n and its 16mm pancake. 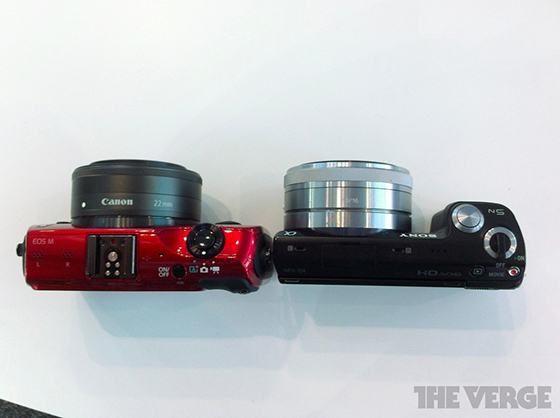 Once you fire up manual mode, you can see that Canon has a lot in store for the enthusiast. First and foremost, while the EOS M has a jog wheel, instead of following its competitors and relying primarily on it to control everything on the camera, Canon is using onscreen controls for everything from switching between shooting modes to selecting aperture and shutter speed values. The interface for the latter uses sliders (see the video below) that make it easy to make necessary adjustments and get back to shooting. That doesn't mean the jog wheel is useless, though — if you're more comfortable with the old-fashioned controls, they're still available, too.

Overall, the interface is responsive and works predictably, putting a lot of information at your fingertips instead of deeper in menus. The difference between the EOS M and cameras that rely completely on a single jog wheel will be immediately noticeable to photographers that shoot in manual mode, since they'll now be able to set aperture and shutter speed with a couple of quick tap-and-slides. It bears noting that one demo unit we were using crashed in the middle of shooting, and not even a hard reset with the power button could bring it back to life. The camera is still in pre-production, so we don’t want to knock Canon too hard, but with only a couple of months to go until the October launch, it isn’t very reassuring.

The 22mm f/2 focuses down to just under six inches

In terms of autofocus performance, the EOS M was noticeably laggier than the NEX–5N, but offered results comparable to a good point-and-shoot. Another point worth noting is that in continuous mode, the EOS M shoots at 4.3fps, significantly slower than many other mirrorless cameras on the market. Suffice it to say, if you’re shooting subjects like sports where speed is critical you’re going to want to look for a beefier body. However, on the plus side, those that pick up the 22mm f/2 lens will be getting not only a decent, shortish prime to walk around with, but also a passable macro, since it focuses down to 5.9 inches (15 centimeters).

Where Canon's new mirrorless body really shines, though, is in backward lens compatibility. The EF-EOS-M adapter allows the body to autofocus and meter with more than 60 of the company’s EF lenses, making the EOS M an ideal backup body or video shooter for those invested in the company’s system (check out Canon's sample images and videos here). To get an idea of how it performs with the adapter, we tried the EOS M with two of the company’s most important lenses, the 24–70mm f/2.8 and 70–200mm f/2.8. While we were satisfied with the autofocus speed, the lack of a viewfinder made it difficult to wield the 70–200mm in a way that was comfortable. There isn't an articulating LCD, so you have to hold it away from you in order to see what you’re shooting, leaving you in a much less stable position than you would be with a DSLR. And unlike some of its mirrorless competitors, the EOS M won't have a separate viewfinder.

We’ve mentioned before that Canon isn’t calling the EOS M a "mirrorless" camera in the US in order to avoid brand confusion with its competitors’ Micro Four-Thirds cameras, but that’s far from the case in Japan. Domestically, Canon will be pushing the EOS M under the tagline "Hello, Mirrorless EOS," complete with a rendition of The Beatles’ "Hello Goodbye."