Share All sharing options for: TaskRabbit takes on another $13 million in funding as investors bet big on peer-to-peer marketplaces

A growing number of investors and entrepreneurs are betting that a new breed of Craigslist 2.0 startups will create a massive new market for people to buy and sell labor, skills, and time amongst themselves. No time to pick up your laundry? Need help hosting a holiday party? Need a "huge ampersand statue"? Jump online and place a bid, and you could have an eager stranger instantly in your employ.

Silicon Valley and internet insiders love the efficiency of matching people with money and no time, to people with time and no money. The latest action in the space comes from San Francisco-based TaskRabbit, a 53-person company that started matching "Task Posters" to "Task Rabbits" in 2008. TaskRabbit just announced a $13 million investment led by Founders Fund, which counts Peter Thiel and Sean Parker among its six partners. The new funding brings TaskRabbit up to $37.5 million in total investment, money it's using to hire aggressively and expand beyond the nine cities in which it operates now.

TaskRabbit was early to the peer-to-peer labor boomtown. The real-time, peer-to-peer marketplace Zaarly launched to tremendous success in 2011 at South By Southwest: Interactive, processing around $10,000 in transactions (read: Gatorade delivery for hungover attendees) as investor Ashton Kutcher walked the trade show extolling the site's usefulness. Zaarly's raised $15.1 million. Justin.tv founder Justin Kan's Exec, which uses a flat rate instead of a bidding process, raised $3.3 million in May. New York-based Done raised almost a million last year. Scads of competitors are launching here and in Europe. "I've heard of 2, 3 TaskRabbit-like startups here," Parisian entrepreneur Cédric Giorgi, who is working on a steal food-centric startup similar to TaskRabbit, said in an email. That's in spite of the fact that strict labor regulations in France could pose challenges for peer-to-peer labor markets, he said.

Silicon Valley loved the efficiency of matching people with money and no time, to people with time and no money

TaskRabbit figures the temporary labor market in the U.S. served by temp agencies is worth on the order of $100 billion, but the company believes the peer-to-peer labor market is "exponentially larger." Investors came running after TaskRabbit got some traction. TaskRabbit wasn't exactly looking for more funding, said Jamie Viggiano, the company's marketing chief. Founders Fund partner Bruce Gibney approached them.

The startup now has 4,000 Rabbits who are employed like temps as independent contractors, and the company says 75 percent of new users come by word of mouth. Craig Shapiro, somewhat of an expert on collaborative consumption models, invested in TaskRabbit's earlier round through his firm, Collaborative Fund. "It's truly incredible to see TaskRabbit's growth," he said. "They have set out to revolutionize the global labor force and are clearly making headway. By enabling and empowering both the TaskPoster and TaskRabbits, they are creating an efficient marketplace for getting things done... There's a very human element to it that adds value to the entire experience."

The peer-to-peer labor model works especially well in a lousy economy when so many are out of work or underemployed. It's not hard to find TaskRabbit fans, although they may not have time to talk to journalists. "Ironically, I am working on a large task right now, so I am so sorry I am not available for an interview today," Anita Bailey, a New York-based Rabbit, wrote in an email to The Verge. 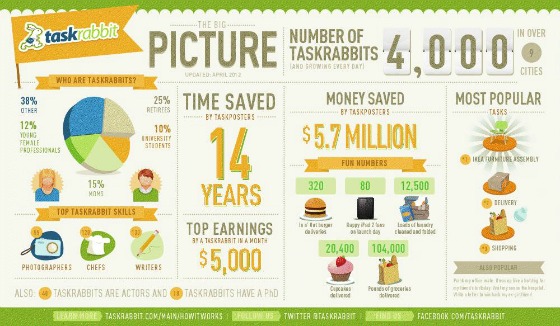 No one is sure what to call this strange new industry. Peer-to-peer commerce? Service network? The "do it for me" economy? Fortunately, the concept isn't hard to explain.

"This space is just being born so I'm sure it'll get named and renamed many times," Zaarly cofounder Bo Fishback said in an email. "It's really just the market for local services at [its] core... but a whole new group of people are being welcomed into it. You could argue that part of this market is already mainstream. Craigslist has been at it for over fifteen years, but there is no doubt that it's getting reborn with much more efficiency, trust and excitement. It'll be a bit before it's as mainstream as e-commerce but there is no doubt in my mind that it will happen." And there's another precedent for peer-to-peer, on-demand labor: Amazon's popular Mechanical Turk service.

But the market is still nascent, and the future is murky. "I'm also not entirely convinced that this is a 'for everyone' kind of service," Matt Galligan, CEO and cofounder of the future-of-news startup Circa and a TaskRabbit user, said in an email. "The upper-middle and middle-middle class may use this service but the upper class already has these kinds of tasks taken care of, and the price is out of reach for some of the lower class." The service will also need to catch on outside of urban areas in order to truly reach the mainstream, which will be difficult, he added.

But the market is still nascent, and the future murky

"My take is that the industry is where ecommerce was in 1995," said Kevin Nazemi, the CEO and founder of Done, the peer-to-peer labor market that specializes in skilled labor jobs, rather than "errands and tasks where the person is interchangeable." Like ecommerce in the early days, peer-to-peer labor markets have to earn the trust of the mainstream, he said, and the industry could use an Amazon-like giant to "break the dam."

Right now, these markets appeal to "busy professionals who are technologically-savvy," he said. "But if you walk on a main street, or you're in New York and you stop a random person and mention the names of the companies in this space, very few of them know what we're talking about. That speaks to where we are in this cycle, but also to the immense opportunity."

Despite all the optimism, peer-to-peer labor markets have lots of growing pains ahead of them. Identity is a big one. What kind of tasks should TaskRabbit and sites like it optimize for? "Odd jobs" is, by definition, a rather wide category. For example, TaskRabbit requires a bidding process for both skilled jobs as well as quick and dirty tasks like laundry pickup, a personality split that feels awkward to some users, Galligan pointed out. Meanwhile, New York-based marketing consultant Amanda McCormick loves the site, but wishes it offered more professional services. "For now I think of Task Rabbit as mostly handyman, errand type stuff," she wrote in an email. "If they added more business type support it would awesome."

TaskRabbit also puts its new Rabbits through a four-step vetting process in order to keep up quality control. Customers appreciate it, and TaskRabbit says it can vet hundreds of Rabbits in a few weeks. However, as scores of startups from Kickstarter to Craigslist can testify, the hands-on approach is the hard way to go. It's tough to scale, and there is no guaranteed way to prevent a high-profile disaster that could sour already-wary members of the public. "The negative is that forms of collaborative consumption aren't mainstream concepts in our world that somebody would necessarily relate to," Nazemi said.

The key is getting users to try the site for the first time, said Nazemi; once they try it, most come back. Accordingly, the startup gave away a New York wedding serviced by Done members as a publicity stunt. Silicon Prairie-based Zaarly may be positioned best to bridge the gap; the company put out an API earlier this year to encourage third-party apps and just announced partnerships with publishers including the L.A. Times that will let readers post tasks from those sites, almost like a newfangled classifieds section. There are many roads that lead to Main Street, it seems.

Collaborative consumption in all its forms — ZipCar, AirBnB, Couchsurfing — does seem to be creeping its way into the American economy. A full 25 percent of TaskRabbits errand-runners are retirees. Many of them probably balked at using their credit cards online for the first time; now they're slinging groceries and cobbling together Ikea furniture for total strangers, thanks to the internet.