I love my Verizon Galaxy Nexus. It's the first phone I can remember using that does everything I ask of it - consistently. One problem: the battery is horrendous. I consistently hit the 15% warning after only about 8-9 hours of use, and it usually faces a horribly tragic techno-death about an hour after that. I picked up the extended battery which usually gets me up to about 12-13 hours, but most days that's still not enough. I almost always find myself reaching for my power cord before dinner. 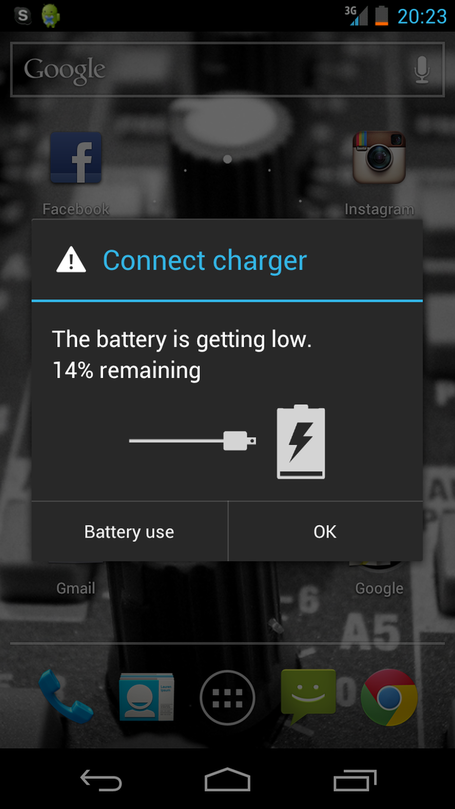 
Anyway I realized about a week ago that I never go anywhere without my MBP - my entire life is on it. And it's got a giant battery in it, which I usually keep topped up. I started plugging my phone in to my laptop in my backpack while it's sleeping and found that I can usually get my phone back from the brink of death to about 35% in under a half hour, and to a full charge in less than 2 hours. Taking a full charge has yet to ding me more than 30% on my MBP battery. The trick works so well, I've taken to using it to charge other things like my Kindle while I'm out and about. I haven't had a Windows laptop since about 2007 but if memory serves the USB controller should still be active in standby mode, so this trick should work with PCs too (at least, running PCs running XP).


Yes, this is probably painfully obvious to some, which is why I won't call it a "hack". But it's been a lifesaver for me. What about you guys? Anybody else have some clever tips/tricks for keeping your devices going late in the day?


Pro tip: you might get some stares walking around with wires running from your backpack to your pocket. Better to leave your cell phone in your backpack with the computer. If you do get stopped by a police officer, DO NOT reach into your pocket. Just calmly explain the situation. TRUST ME.