Outlook and PowerPoint for iOS spotted in Microsoft job postings

Outlook and PowerPoint for iOS spotted in Microsoft job postings

Job postings on Microsoft's site are looking for software engineers for the Outlook and PowerPoint teams to work on "Microsoft's next move on the Mac and on iOS."

Evidence that Microsoft is working on an iOS version of its Office suite is mounting. Job postings on the company’s website from July 14th, originally discovered by 9to5Mac, indicate it’s looking for experienced OS X developers to be part of its PowerPoint and Outlook test teams. While Office has been around on the Mac for nearly 20 years, the job descriptions contain the phrase "new feature work to be part of Microsoft’s next move on the Mac and on iOS (emphasis ours)." Of course, the postings are far from proof that full versions of the immensely popular productivity suite are on their way to Apple’s mobile platform, but they’re intriguing nonetheless. 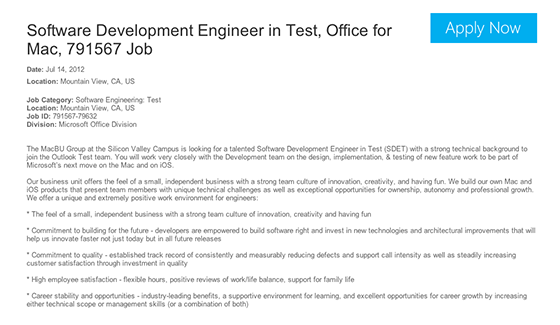