This is my next is a special feature where editors of The Verge sound off on their latest deep, dark desires from the world of technology.

Say what you will about Apple's slavish worship of skeuomorphism and sometimes-questionable design decisions of late — Apple's best first-party apps are well-designed, with features that make them feel like a better "fit" in OS X than third-party options. I felt Safari was one of those apps for a long time — but somewhere along the way we started drifting apart. Lately, I've been thinking it's about time we get back together.

I bought my first modern Mac (the first 12-inch PowerBook) in early 2003, a few months after Apple introduced the Safari beta at MacWorld. Browser options were pretty limited at the time — Internet Explorer for Mac 5.2 was a fairly dismal port of IE for Mac OS 9, and Firefox and Chrome were months or years away, respectively.

Compared to the options, Safari was a revelation — tabbed browsing was a great interface paradigm that took years to come to Internet Explorer, while the streamlined interface elements and removal of borders on the left, right, and bottom of the browser meant you saw more content and less browser. In a world where pop-ups were rampant, Safari's built-in blocker was fairly bulletproof, making browsing a far less frustrating experience. Add in the native OS X code instead of a legacy port and Mac users finally had a lightweight, fast browsing experience.

And the humble bookmarks bar is probably my favorite feature in Safari. I spent an inordinate amount of time selecting what sites to have one click away and stashed the rest of my favorites in topical folders. Just a few clicks, and I could open up a whole fleet of grouped webpages. I didn't get into Google Reader until years later; this was my preferred way for quickly keeping up with my favorite sites. Sure, IE 5 had a similar system, but the browser's overall sluggish performance meant I never invested the time in tweaking it just to my preferred specifications the way I did with Safari.

With the launch of Safari, you could even make the argument that Apple had finally finished its OS X transition. There was still a tremendous amount of polish and feature additions that came in future OS X versions, but Safari made the platform much more viable for average users who were increasingly living their computing lives in the browser.

Safari quickly became my personal browser of choice, and it stayed that way for the better part of the next eight years. That doesn't mean I didn't dabble with other browsers; I used Firefox, and then Chrome, for Windows almost exclusively in my former jobs. Still, I persisted in using Safari on my Mac when not in the office.

This all changed almost a year ago when I started working at The Verge. Bowing quickly to the advice of my co-workers, I started using Chrome as my main "work" browser and Safari began to finally fade into the background. We rely heavily on Google services here, tab syncing between my desktop and laptop was surprisingly handy, and Chrome's tab management makes Safari's look rather clunky. But while Chrome has a lot going for it, things have been a little rocky between us lately — as Chris Ziegler so eloquently puts it, there are some serious issues with Chrome and Flash that can be major productivity sinks.

But just as I'm getting fed up with Chrome, Apple goes ahead and launches Mountain Lion with Safari 6.0. With the addition of iCloud tab syncing across multiple OS X machines (which will finally come to iOS 6 this fall), integrated sharing to Twitter, a unified search and URL bar (finally), and a new gesture-based tab management system, I should be just as productive as I was in Chrome — but without the memory leaks and white screens. As a big fan of Apple's gesturing system, I'm looking forward to pinch-and-swiping my way through the many tabs I have open all day long. 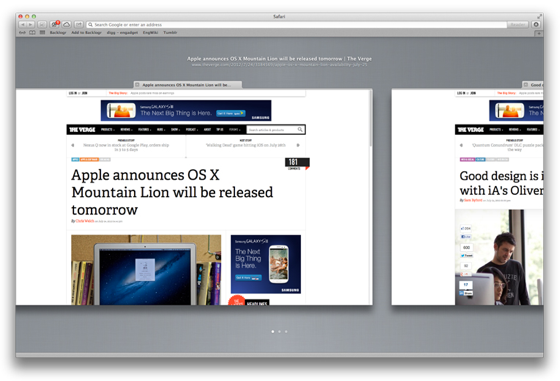 There's also a few older features, like Reader view, that I'm looking forward to pushing into my workflow. As someone who looks at far more articles and links on a daily basis than any human being should, being able to quickly enter a distraction-free reading environment could be a boon to my focus when plowing through articles. As for pure browser rendering speed, we're at the point where I personally can't tell the difference between the two browsers anymore. For me, "feel" is probably the most important benchmark — and according to Nilay Patel's Mountain Lion review, Safari 6.0 feels incredibly fast.

Sure, this could be a disaster and I might end up slinking back to Chrome, but I'm not worried about that now. I'll be throwing caution to the wind, installing Mountain Lion today, and seeing if Apple can keep me committed to its vision of the browser. Of course, this all might change if Google tempts me to join the Android crew with multiple flagship Nexus devices this fall... but I'll cross that bridge when I come to it.