As patent wars escalate, business booms for those who can predict the odds

Patent litigation is booming business in America and a startup called LexMachina has raised $2 million to provide intelligence to companies on both sides of the courtroom.

Share All sharing options for: As patent wars escalate, business booms for those who can predict the odds

Over the last decade the number of patent lawsuits filed in the United States each year has exploded. A new study found that patent trolls, now cost American companies about $29 billion a year. The number of defendants named in these lawsuits has more than tripled in the past five years, and range from major corporations to fledgling startups. For many in the tech industry, this has become cause for serious concern. For LexMachina, the patent crisis is a massive business opportunity, and the company has just raised a fresh $2 million led by X/Seed Capital to expand its operations.

"The common wisdom when companies are hit with a patent lawsuit is to settle, because you don't know things will go in court," explains CEO Josh Becker. LexMachina draws on 130,000 court cases to provide clients with robust data on everything from the history of decisions by individual judges to the the track record of law firms who handle these cases, and the outcome of previous cases dealing with similar patents."If you are a startup in New York or San Francisco, you want to know how this judge on a rocket docket in East Texas has ruled before." (Rocket dockets are court districts notorious for their speed, where a plaintiff can prepare, file their case and leave defendants little time to catch up.)

"If you are sued by a patent troll, it helps to know their history, who their council is and their track record," says Becker. "It's kind of like moneyball for patent litigation. You’re not going to win every game, but you can be better armed to make informed decisions."

"Our findings were really quite interesting," says Prof. Mark Lemley, one of LexMachina's founders. Most small and medium sized companies that got hit with patent lawsuits were simply settling the cases, under the impression that this was cheaper than going to court and risking a loss. "It turned out that some of the worst, most prolific patent trolls had a really terrible record when they actually went to court, winning less than one in ten of their cases."

"We were arguing with no knowledge of the facts."

Each day, LexMachina crawls the web, extracting data and documents about hundreds of court cases. It uses natural language processing to scan this material and classify the parties and patents involved. "IP considerations have catapulted from a small corner of the legal department to the C-level suite and boardroom of most major companies today," says Dan Cooperman, formerly general counsel at Apple and Oracle. "Lex Machina provides essential intelligence for the transactions and disputes that comprise IP business strategy."

LexMachina began in 2006 as a public interest project at Stanford University, called the IP Litigation Clearinghouse (IPLC). It tried to map out every electronically available patent litigation and outcome. "Everyone knew that the patent system was changing rapidly and that patent trolls were become much larger and more numerous," says Mark Lemley, the Stanford professor who founded the IPLC. "But there was no hard data to study on exactly what was going on. We were arguing with no knowledge of the facts. So we set out to create this public clearinghouse, on the principle that more information and transparency was the best way forward."

Donors put over $3.5 million into the IPLC, including the Kauffman Foundation, Apple, Cisco, Genetech, Intel, Microsoft, Oracle, Qualcomm, and SAP. But Stanford has a unique history of merging the academic and the corporate, the public and the private. In 2009 LexMachina spun off from the IPLC, armed with a unique knowledge about the treasure trove of data the IPLC had been collecting. 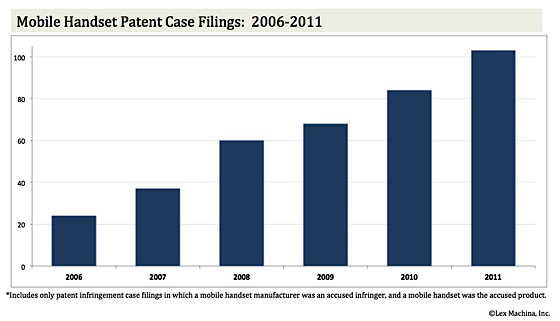 While the IPLC developed at Stanford is free to the public, LexMachina costs $10,000 a year for an individual license. Becker, the CEO, says that they are considering providing some services free for smaller companies. "We've seen patent trolls go after very small, early stage mobile companies. Those are the kind of people who could really use our service but might not be able to afford it."

"Sunlight is the best disinfectant."

As big companies amass their war chests of protective patents, the trolls move down the food chain. For now, LexMachina is a business, and a neutral party. "Certainly a number of our clients are NPEs," says Prof. Lemley. "We like to think of ourselves as a clearing house." I asked if he ever got upset about doing business with folks on both sides of these court cases. "Well I kind of have three different lives," he replied. "I am a professor at Stanford, where I teach classes and might be inclined to agree with you. But I am also a practicing lawyer and I also work for LexMachina. We are bringing more information into the system and allowing people to better understand the risks that exist. Sunlight is the best disinfectant."