Zynga reports a loss and revises its earnings estimate downward in the second quarter of 2012 as the stock sinks more than 40 percent.

It's going to be a rough year for Zynga, maker of popular social games FarmVille, CityVille, Mafia Wars, and other time sinks. The company reported a $22.8 million loss in the second quarter and drastically revised its expectations downward for the rest of the year. The stock sank more than 40 percent on the news and even pulled down the stock price for Facebook, which got around 12 percent of its revenue from Zynga games alone last year.

The problem? Zynga's daily active users and monthly active users increased 23 and 34 percent respectively, but players are spending less money. The average bookings per user decreased 10 percent, a trend that continued from last quarter. This decrease was due to the fact that Zynga is putting more effort into mobile games, where players typically spend less money, the company said. Changes to the Facebook news feed and App Center de-emphasized Zynga's games, the company said, because Facebook now favors new games over existing ones.

On an earnings call yesterday, Zynga's CEO Mark Pincus and COO John Schappert were bullish on the company's prospects. "We are the most optimistic long-term believers in the opportunity for social gaming and play to be a mass market activity, as it's already becoming," Pincus said. "While Q2 was a challenging quarter, we are excited about the back half of the year," Schappert said.

More people are playing, but they're spending less money

Still, they warned that things are going to get worse before they get better. The company's challenges include building mobile games that players will still want to spend money on — Zynga Poker is the only game that monetizes just as well on mobile as on the web, the company said — as well as making improvements to existing games so that players don't get bored. 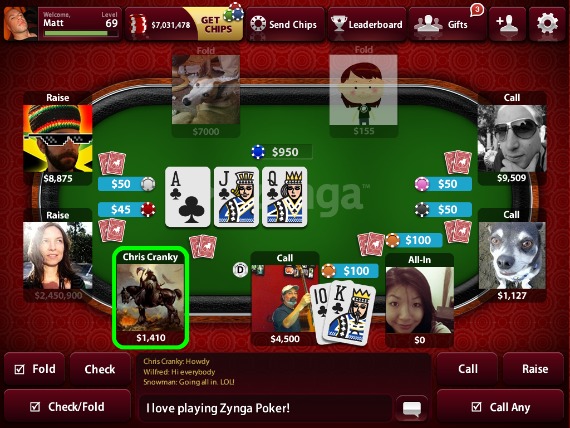 More recently, Draw Something, the hugely popular mobile game that inspired Zynga to purchase its publisher OMGPOP for $180 million in March, started losing steam almost immediately after the acquisition. The "underperformance of Draw Something" was a factor in the decision to reduce expectations, Schappert said. Mafia Wars 2, launched last fall, was widely considered a flop and Zynga admitted as much on yesterday's earnings call.

In short, Zynga's having trouble keeping people addicted to its games. Perhaps that's why the executives on the earnings call repeatedly mentioned Zynga Poker and "casino games" — gambling is a pretty powerful habit, and poker is already Zynga's second-most lucrative game, responsible for 18 percent of revenue. That path is fraught with legal issues, however, as federal law enforcement cracks down on online gambling in the U.S. So far Zynga has been able to stay clear of gambling laws because its players are unable to cash out their digital chips.

Zynga lowered its expectations for the year from 23 to 29 cents a share to four to nine cents a share, and adjusted its expected revenue downward by at least $27 million. On the bright side, Zynga said, the recently-launched The Ville has 6 million users already. The company is about to launch ChefVille, which has had a few delays in production. Zynga is also about to unveil FarmVille 2, a new version of the three-year-old game that has been "reimagined from the ground up." In other words, cow clicking in 3D.