Microsoft's WIndows Phone 8 SDK has leaked ahead of a possible public preview version for developers.

Microsoft's Windows Phone 8 Software Development Kit (SDK) has leaked out onto the web ahead of its expected debut. Chinese site WPXAP has posted links to download the SDK and accompanying documents that provide additional details into the development options for Windows Phone 8. We're digging into the documents right now, but it appears that the leak is a preview version of the SDK, indicating that Microsoft may be planning to release this kit officially in the coming weeks.

Parts of the documents include references to a new camera capability and lens apps, including real-time access to the phone's video stream and lenses — special camera apps that provide additional effects and filters for cameras. The rumored 3D mode for Nokia Maps, the default mapping experience in Windows Phone 8, is also detailed in the documents — with details on hardware-accelerated rendering.

Microsoft is also advising developers that Windows Phone 8 will support hot-swappable SD cards, but that apps will have read-only access to user stored content on them through APIs. Direct3D is also being added to Windows Phone 8, Microsoft says in its documentation. Although some of the APIs will be similar to WinRT, Microsoft says HTML-based phone apps are "not a supported app model in Windows Phone 8 Developer Preview."

Overall there's not a lot of additional information from this leak, but it has confirmed some previous rumors that revealed Microsoft was planning to improve its camera functionality. We have reached out to Microsoft for comment on the SDK and we'll update you accordingly.

Update: Paul Thurrott over at Winsupersite.com has managed to install the Windows Phone 8 emulator, revealing the Lenses improvements and a new Data Sense feature. 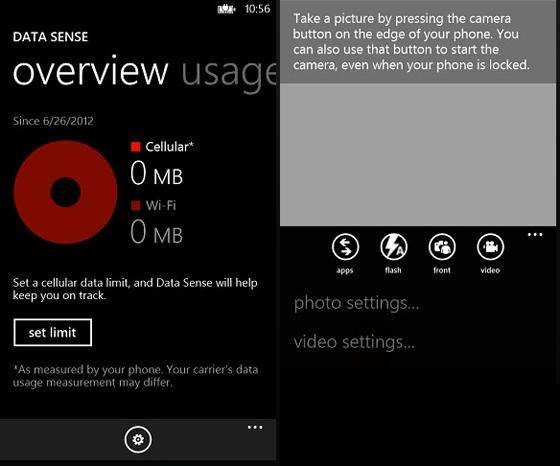