MetaWatch introduces Strata smartwatch on Kickstarter: 'iOS 6 made it possible'

MetaWatch introduces Strata smartwatch on Kickstarter: 'iOS 6 made it possible'

"Since I've been sort of in the front seat of almost every trainwreck in this business, I feel like I'm kind of one of the stewards of the category. I think it's important that this category actually sees success," he told me. Geiser isn't exaggerating: along with teammate David Rosales, he led a series of smartwatch efforts at Fossil over nearly a decade before spinning off as an independent company last year. None of Fossil's models (including several running Palm OS and the now-defunct MSN Direct service from Microsoft) were wildly successful in the mainstream, which helps explain why he's been taking a more measured approach with his MetaWatch outfit: all three of the company's past and present models are advertised strictly as development kits — sandboxes for hackers — not as consumer-ready fashion accessories.

That changes with Strata, which MetaWatch is introducing today on Kickstarter. "We've been very, very reluctant since we officially became MetaWatch of entering the market until we felt like there was a really unique opportunity to deliver a terrific consumer experience. The thing that made that happen for us was iOS 6. For the very first time, Apple made it possible to deliver a broad range of notifications over Bluetooth to the wrist." Geiser characterizes SMS (or, in Apple's case, iMessage) as the killer app for connected smartwatches — and prior to iOS 6, nothing short of a jailbreak would allow text messages to flow out over Bluetooth. Regardless of where your smartphone allegiances lie, it's easy to understand why iOS compatibility out of the box would be important to securing commercial success.

The Strata features a 96 x 96 monochrome display, vibrating alerts (impossible to miss or ignore, unlike a vibrating phone in your pocket), Bluetooth 4.0 support, six programmable buttons, and water resistance to 5 ATM, which means you can safely go swimming with it. It also has a three-axis accelerometer and a light sensor that can be used by developers; it's billed as a sports watch, so the accelerometer will come in handy for running telemetry. Built in notifications include calls, text messages, emails, Facebook and Twitter updates, and calendar reminders. You also get weather forecasts, music player transport controls, and — a feature that'll be familiar to owners of Sony Ericsson's old MBW series of Bluetooth watches — a "lost phone alarm" that goes off if you stray too far from your handset. MetaWatch is targeting 5-7 days of battery life, at which point you'll recharge using an included clip. Every part of the Strata will be open source except the Bluetooth software stack, which MetaWatch licenses.

At its launch in September, the watch will be available in four color choices: blue, green, or tangerine over black, or blue with what MetaWatch is calling "QR digital camouflage" on the band — a camo pattern with the familiar QR code boxes mixed in. The most exciting option, though, comes a month later: MetaWatch is teaming up with legendary bitmap designer Susan Kare, who has already worked on MetaWatch's icons, for an individually numbered and signed series of 250 units that will be available in October. Geiser says he hasn't seen Kare's design yet, but it's safe to assume that it'll exude an air of nerd chic that only a bitmap-inspired wristwatch could. Buyers will pay a $140 premium for the Kare limited edition. "She's one of the few experts that's really, really talented in doing small-screen monochrome bitmaps. It's a lost art."

"What I'd love to see is a very rich digital display that I can drill a hole in."

Strata's mirror polymer display — which, like Pebble's E-Paper component, draws very little power — will be familiar to anyone who's seen MetaWatch's older models. The company had also offered a hybrid analog / digital model last year with rectangular OLED displays embedded in the face above and below the electronically-controlled hands that has been discontinued. "I would say we haven't dropped analog, I'd say we're taking a breather. I will tell you that our long-term roadmap and just what I personally believe, I think analog will outsell digital ten to one. Analog is such an interesting aesthetic. But in the short term, demand for the digital was much greater than the analog piece, so it was a resource decision. [...] My personal view, what I'd love to see is a very rich digital display that I can drill a hole in. You can't do that with today's displays." Geiser also notes that E-Ink isn't right for what most smartwatches are trying to do — changing the display draws significant power, and a notification-rich device simply needs to change the display too often. 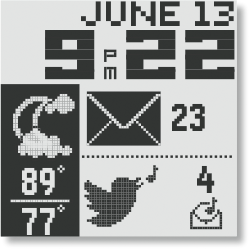 The iOS-only nature of the Strata is a big shift for MetaWatch. When its original hacker-friendly watches launched last year, they were only compatible with Android for a very practical reason: the platform is wide open, which made it possible to tap into the connectivity needed to make the watches useful — but it was never smooth sailing. "It has to do with all this Android fragmentation. Even within one version of Android, we'll encounter multiple Bluetooth radios, multiple Bluetooth stacks, multiple implementations of this stuff. It's a nightmare. We can control what we do on our end, we can't control what happens on the handset end." Geiser says that MetaWatch will return to Android in some "limited" capacity later this year, though the company hasn't yet worked out details.

In contrast to competitors like WIMM and InPulse, MetaWatch isn't planning a dedicated app store that users visit to get new apps for their Stratas. "We think that there are two viable app stores in the world today: one by Android and one by Apple. For us to think that we're going to go create our own app store and get lots of developers... I don't buy it at all," Geiser says. Instead, the Strata is simply controlled directly by whatever iPhone apps that choose to support it, including MetaWatch's own Manager app. 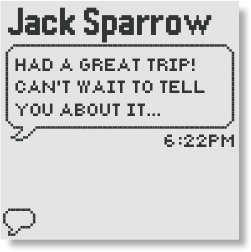 With its record-setting Kickstarter campaign, it's easy to guess that Pebble's success influenced MetaWatch's decision to turn to crowdfunding for the Strata. "I don't think Pebble or Kickstarter or anybody anticipated such a roaring success with that product," Geiser says. "From our particular case, yeah, we had already contemplated doing this product. We started development on this platform two and a half years ago. All the puzzle pieces were in place... when Pebble and Kickstarter hit, it made us realize that Kickstarter is a really interesting marketing platform." In the interest of meeting delivery deadlines, he notes that MetaWatch is capping every one of its Kickstarter funding levels. "I'd much rather limit what we can sell but deliver on the promise that we've established, than try to maximize sales and maybe damage our reputation and make some of our customers upset."

Geiser likes his chances against the Sony SmartWatch, perhaps the highest-profile smartwatch launch to date, which is currently being offered in Verizon stores. "Touch on a watch is nonsensical," he says. "It's really a horrible experience, it doesn't work very well. What they've done is try to turn a watch into a mini version of a phone, as opposed to building a watch that's really designed to work around the limitations of their phones. That's hard for a handset manufacturer to do — to admit that their phones have any issues. We're free, Pebble's free. I think of all the guys in the business today, MetaWatch and Pebble have picked the right lane."

"We're like Sancho Panza in Don Quixote. We're not trying to be Don Quixote, we're just trying to serve our master. Our master is that iPhone or that Android device."

Of course, no matter how good a smartwatch may be, Kickstarter isn't the endgame — it'll take brick-and-mortar presence to take the category to the next level, to push it beyond the early adopters and into the mainstream. "I don't see smartwatches being sold where watches are sold today. We're talking about new channels — channels where phones are sold today," Geiser says. I asked him if he thought it was realistic to see MetaWatch products on Apple Store or Best Buy shelves a year from now. "Yeah, I do. I think retail distribution will start to really gain steam next year."

In the short term, though, if you want a Strata, you'll need to crowdfund your way into one. The basic models will run $159 shipping in September; a "firmware hacker" version will be available for $199, while Susan Kare's signature design will cost backers $299.