Documents show Samsung fixated on a 'Beat Apple' strategy, but did it cross the line?

Documents show Samsung fixated on a 'Beat Apple' strategy, but did it cross the line?

Tonight's trove of court documents in the Apple vs. Samsung case not only revealed a ton of new images of iPhone and iPad prototypes, but also show that Samsung was very focused on making sure that it is competitive with Apple offerings. That's exactly as you'd expect, but the level and depth of Samsung's focus on Apple is still quite revealing.

Tonight's trove of court documents in the Apple vs. Samsung case not only revealed a ton of new images of iPhone and iPad prototypes, but also show that Samsung was very focused on making sure that it is competitive with Apple offerings. That's exactly as you'd expect, but the level and depth of Samsung's focus on Apple is still quite revealing.

By late 2011, however, it becomes clear that Samsung is not only interested in competitive research, but was formulating a specific strategy targeted specifically at Apple. "Goal of next year - BEAT APPLE," read one September, 2011 memo. As early as June of 2011, we found references to a "Beat Apple strategy."

According to the documents, the goal was to "Go Head-To-Head with Apple" in multiple price segments and in multiple regions. By February of 2012, Samsung honed its focus on beating Apple to a finer edge, with one document dismissing other phone manufacturers and declaring that the "three horse race [is] becoming a two horse race between Apple and Samsung."

The question that will likely face the court is this: did Samsung's competitive analysis cross the line into copying Apple's products? There are bits and pieces that Apple will probably point to to prove that point. Mixed in with Samsung's research and emails regarding how to improve its products are hints that Apple may believe proves its case.

In February of 2010, an email suggests that Google had concerns that Samsung's "P3" tablet — the Galaxy Tab 10.1 — and requested design changes. "Google is demanding distinguishable design vis-à-vis the iPad for the P3." Google went so far as to ask Samsung to make it "noticeably different starting with the front side."

In May of 2010, after Google I/O, internal emails reveal that some of the iPhone-related comments from the developers in attendance were circulated within the company. "The GalaxyS [sic] looks very similar to iPhone." By October of the same year, emails circulated requesting browser features like "bounce effect" and other improved animations: "The animation effect for multiwindow deletion is plain in comparison to the iPad." The "bounce effect" issue, in particular, has a good chance of being front-and-center in Apple's case. It's one of the remaining patents at issue after both companies agreed to jettison some of their disputes before the trial — and one that Apple offered to license to Samsung. This memo could also be interpreted as an explicit request to copy iOS, and we expect that Apple will certainly try to present it in that light.

In February of 2010, meeting notes from an executive level discussion described a "crisis of design" at the company. According to the notes, executives were concerned that Samsung was too focused on Nokia. The real competitor was Apple, and the problem was that when Samsung's "UX is compared to the unexpected competitor Apple’s iPhone, the difference is truly that of Heaven and Earth."

"The difference is truly that of Heaven and Earth."

In August 2011, Samsung took the natural and understandable step of surveying Best Buy stores to find out why its Galaxy Tab tablet was being returned. Most of the reasons listed within the document were spread along the usual gamut of hardware and software complaints. However, in seven of the 30 stores surveyed, the primary reason for returning a Samsung tablet was "lack of product knowledge." One such example could potentially be damning for Samsung, depending on how widespread it actually was:

Although it seems like a relatively small number overall, it's likely enough for Apple to want to bring it up during the trial. 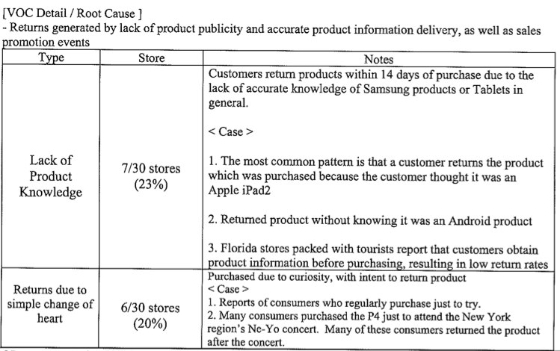 Looking at these hints out of context, it's impossible to know whether they are damning evidence of infringement or innocuous evidence of a company completely focused on beating its rival. However, the existence of that focus can't be put in question.

In February of 2012, an internal memo presented the challenges Samsung faced on a specific carrier: AT&T. It was concerned about the lack of LTE, its own inability to launch competitive phones on multiple price points, and even AT&T's own attitude towards its phones. One line reads, "AT&T has opposed 'Fan Boy' ads, so not possible to fully leverage our spend." That's likely a reference to the Samsung commercials leading up to and during the Super Bowl, which mocked Apple customers.

If AT&T did indeed try to quash the ads and Samsung chafed under the restrictions, as this memo implies, then the company's goal to "beat Apple" begins to take on the same bitter undercurrent that many detected in those very commercials.

Both internal documents and commissioned work from third parties show that Samsung has been hell-bent on matching Apple's ecosystem. iTunes and the App Store offer a significant advantage in that customers tend to be more locked into the content and apps they've purchased for iOS. By the end of 2011, Samsung's plan to launch the Galaxy S III and a set of related content services was put in place. Still, the company was concerned that it was "lacking a WOW idea to share with GS [...] Generally, lacking confidence in our plan to 'beat Apple.'"

To wrap up, it has to be noted that these documents are obviously selected to put a bad light on Samsung and its analysis of the iPhone and iPad as competing products. It will be up to the jury to decide whether Samsung's attempts to compete crossed into attempts to copy. Whether or not that stratagem works, the documents paint a picture of Samsung as one of the fiercest competitors in the mobile landscape. For anybody that's watched Samsung's rapid rise in marketshare, that picture should be a familiar one.

Matt Macari contributed to this report