I've always been overweight, and - ever since the iPhone 3G and the Wii - I've had a bit of an obsession with finding ways to combine technology with my personal fitness.

In April of 2010, the original iPad was a revelation for me - but likely not for the same reasons as most other early adopters. Where some people saw couch companions, or a gaming system, or a netbook replacement, or an eBooker reader, I instead saw another tool in my quest to get in better shape.

A month before the release of the first-generation iPad, I started a 2-year membership with LA Fitness. I had been debating purchasing home equipment, but decided I'd rather figure out what type of equipment I wanted, and a gym membership was ideal for that. What wasn't ideal, however, was using the actual equipment. Unfortunately, like many others, I found using treadmills and stationary bikes to be monotonous - to put it nicely. What I needed was something to distract my mind and help me lose track of time. What I needed was a tablet.

I think anyone who has used the internet for any significant amount of time has experienced the time-loss that inevitably occurs when you get drawn into something like Wikipedia or TV Tropes...you decide to quickly look-up an article about Batman comics and suddenly it's 2 hours later, the sun is down, and you're reading about health care in Poland. I'm sure there's some science-y scientific science behind the phenomena, but that wasn't what I cared about - what I cared about was using that effect to my advantage. Tablets are often called media consumption devices, but I would argue they could more accurately called information consumption devices. When my brain is busy consuming information, an hour can - and often does - pass by incredibly quickly.

Over the last couple of years, I have harnessed this technique and - in the process - refined and streamlined my personal workouts in several key ways. Most notably, after my LA Fitness membership expired a few months ago, I acquired a treadmill and a stationary bike for my personal use - not something everyone has room for, but I found that I was much more likely to stick to a routine if the equipment was readily and immediately available. As a bonus, this meant I could take advantage of my home WiFi, rather than having to awkwardly tether the iPad to my phone's crappy signal while I was at the gym.

I workout 6 days a week in the morning before work - alternating 3 days on the treadmill, and 3 days on the stationary bike. I stream music and other audio from the iPad to my Motorola S305 Bluetooth headphones (my preferred workout music is the Trance/Progressive Station on Slacker Radio), and monitor my heart rate on my old iPhone 4 using a Wahoo Fitness ANT+ Dongle and Heart Rate Monitor. I really should, at some point, upgrade to a Bluetooth Heart Rate Monitor, but I feel no need to as long as the old one is working and I have my old iPhone. Waste not, want not - and God knows I waste enough on gadgets already. 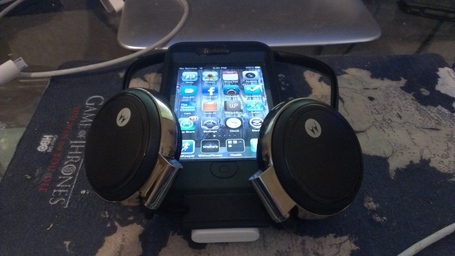 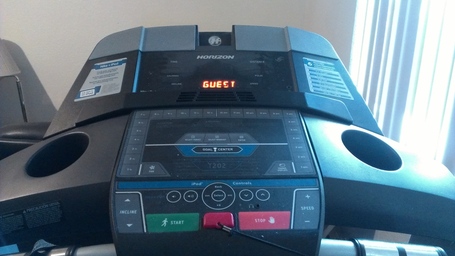 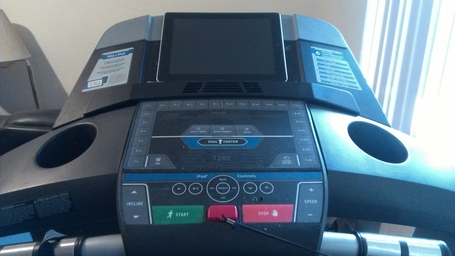 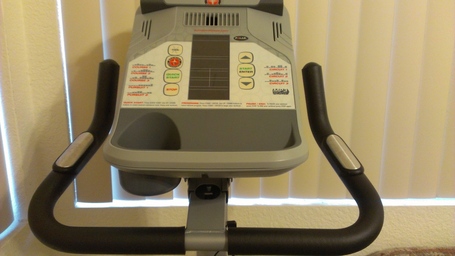 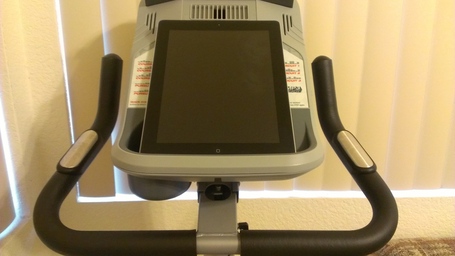 One thing you might notice is that the iPad covers up information like distance, speed, and time elapsed. I actually view this - particularly the third one - as a benefit, rather than a drawback. The less I know about how much time has gone by, the better. If there's a timer for me to "accidentally" glance at, I almost certainly will - and as they say, the watched pot never boils. It's bad enough that my heart rate monitor app is visible in the corner of my eye, feeding my valuable information, but also tempting me with knowledge of my elapsed time.

A question I hear often is whether or not I'm actually getting a good workout, considering I'm still able to use my iPad. I can confidently say: Yes. The apps I use for reading only require minimal input, and I use the HRM to guarantee I'm reaching my target heart rate - typically somewhere between 150 - 165 BPM.

Why the iPad? What about other tablets?

The simplest answer is that the iPad is the tablet I own, so it's the tablet I use. Obviously, back in April of 2010, the iPad was really the only tablet that matched the qualifications I had: I needed it to be light, thin, and easy to use while working out. Over 2 years later, there are now obviously more options, but I opted to get the third-generation iPad for several reasons:

At this point I've streamlined my usage to the following basic pattern: I start with Reeder so that I can catch up on my morning news. After Reeder comes Zite, which helps me catch on news I wouldn't otherwise get in my regular RSS feeds. Finally, I finish up with Pocket, where I attempt to tackle my never-ending backlog of saved articles - mostly from Cracked.com. Occasionally I'll also poke around in Flipboard, or jump into the Kindle app if I feel like reading a book. For some reason, though, catching up on news and various Internet articles seems to make the time go by faster than reading fiction. I guess that's just how my brain works.

Obviously, there's no reason you couldn't use another type of tablet, especially given the recent (and deserved) popularity of the Nexus 7. Having not had personal experience, I can't vouch for it one way or the other, though I'd think it might prove a bit more difficult to read on a smaller screen and to use smaller interface controls. Still, I'm sure it could be made to work well enough, especially if you're part of the growing population of people that already own one.

What about movies, TV, or games?

While the primary use for my tablet was text-based consuming information, that's not to say it's the only strategy I tried. At various times I also used it to watch TV shows or movies and even play games with very simple control schemes. When it comes to TV and movies, the problem for me is that when I watch anything longer than 5 or 10 minutes, it's too easy for me to subconsciously track the amount of time that's gone by - which defeats the purpose of using information consumption to lose track of time. The problem playing games is simpler - there just aren't that many games that are playable when you're really exercising, and even for the games that are playable, they can be distracting enough that the overall quality of the workout suffers.

Do you really need the iPad?

Well, yes and no - despite writing an entire post about how I use an iPad to quickly pass the time while working out, I do also enjoy exercise just for the sake of exercise. I love riding my bike outdoors and going hiking. I'm also (very gradually) learning to enjoy running outdoors as well...of course, when outdoors, I have RunKeeper with me, because gadgets are a great and fun way to enhance outdoor workouts, too.

Unfortunately, back in reality, a busy work schedule combined with Tucson heat means that the simplest and most time-efficient exercise is almost always going to be preferable. When it comes to facing that reality, the iPad has proven to be an invaluable tool in that regard - there's really nothing else like a tablet, at least not that I've found.

Anyway, I would love to hear how you guys have incorporated technology into your fitness habits, whether it's just listening to music or if you solely depend on the Wii or Kinect to get a solid workout - which I've done in the past myself, but that's an entirely separate post. In addition, if you have any questions or suggestions about my current setup, or what I've tried in the past, etc. - I'd be glad to answer them.