Apple has revealed a prototype that refutes claims Sony inspired designs for the iPhone.

When we last checked in on the Apple vs Samsung trial, filings revealed Samsung's aggressive plans to beat Apple, but also suggested a glimpse at Apple's Sony-inspired design process. Apple claims otherwise: the latest documents have revealed prototype "Purple," a concept device that bears all of the hallmarks of the iPhone while predating the "Jony" concept that suggested Sony's ethos had heavy influence in Apple's internal brainstorming sessions.

"Purple" dates back to August 2005 — months before the Jony prototype was originally designed. According to the documents, Shin Nishibori's Sony-style touches were simply "an 'enjoyable' side project," embellishments on a concept Apple had already designed. The documents contend that Purple remained free of the alleged Sony inspirations, ultimately giving birth to the iPhone in 2006 (and looking decidedly like the iPhone 4). 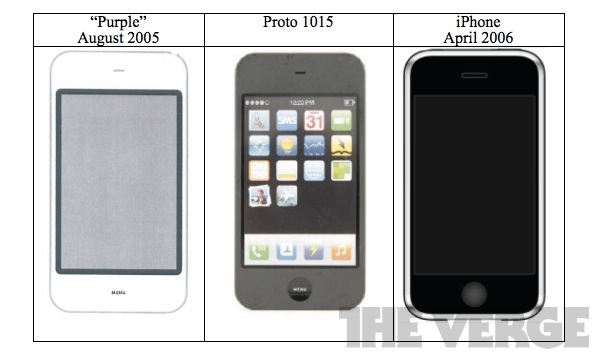 In further filing news, AllThings D has uncovered a few more images that reveal Apple's initial prototypes. Many of the designs we saw in leaked documents last week reappear here, but the latest barrage of filings reveals a slew of new designs and renders. The slideshow is lengthy, but offers another glimpse into Apple's design iterations.

Update: Judge Lucy Koh has now issued an order that Samsung will not be permitted to present evidence during the trial on the Sony-inspired designs for the iPhone.