Panasonic says it has created an artificial photosynthesis system that can convert carbon dioxide into organic fuels, and can do so as efficiently as plants.

Panasonic says it has created an artificial photosynthesis system that can convert carbon dioxide into organic fuels, and can do so as efficiently as plants. The system creates energy by passing sunlight or concentrated light through a nitride semiconductor photoelectrode, and then uses this energy to convert carbon dioxide and water into formic acid. The system may seem inefficient with a rate of just 0.2 percent, but it's the most efficient system of its kind so far, according to Panasonic. Previous attempts to create a similar mechanism had a limited efficiency due to their complex structures.

Although formic acid is corrosive and generally toxic to humans, it has many uses. The company says that the formic acid produced could be used for dyes and perfumes, and it can also be used in cleaning products, pesticides, and as a preservative in food for livestock. Panasonic hopes to use this technology to create a "simple and compact system" to capture and convert carbon dioxide emissions from industrial plants. Many small systems placed at centers of industry worldwide could make a huge impact on current carbon dioxide emissions and the resulting problem of global warming. 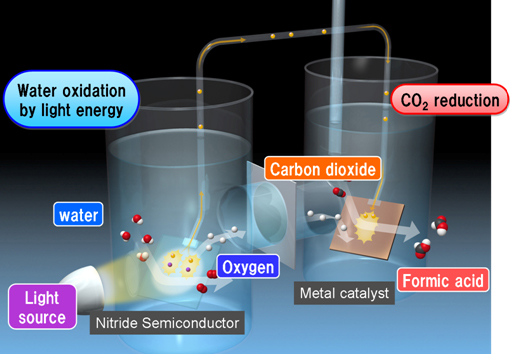