If you thought Microsoft was done with its summer announcements then think again. The software giant is unveiling a brand new preview version of Hotmail today — Outlook.com. Although the old version of Hotmail will remain active, Outlook.com brings together all of its best features and more, accessible via the web, Exchange ActiveSync compatible clients, and POP3. Existing Hotmail users can upgrade to the preview version today — with options to rename an existing @hotmail.com address to @outlook.com or to add an additional alias to an account — and new Outlook.com users can pick an @outlook.com email address.

Like Office 2013, Microsoft is describing its new email service as a "modern" one. Built with the same Metro design as Windows 8, Outlook.com brings together cloud connected accounts, data, and a familiar email service with a new look. Microsoft is also enabling threaded messaging by default and introducing Skype video web calling. "We think that email can do a lot better than webmail," says Microsoft. "We decided it was time for a change."

The change is a fairly massive one, with a fresh and clean interface that mirrors a lot of the functionality found in Windows 8. When you start using Outlook.com the first thing you'll witness is the simple Metro design and functionality, but after you start to play around with the various features you'll also notice the attention to detail. From a simple loading circle when sending a message to animations throughout the interface, Microsoft has pulled together the best elements of Metro and applied them to Hotmail. A dotted line loading bar at the top also matches the Windows Phone's user interface. The reduction of clutter and simple interface is surprising at first, but it closely mirrors Outlook 2013 — a great improvement to Office 2013 itself.

By default, Outlook.com offers a three column layout with folder, Quick Views, and search on the left-hand side, email content in the middle, and a new command bar on the right-hand side. Outlook's command bar dynamically changes based on email activity, providing contact information from Facebook, Twitter, and elsewhere. It also serves as a place for Microsoft to display ads within Outlook.com using the company's AdChoices platform. The ads are fairly unobtrusive, and from my experience they primarily focus on products from Bing Shopping. Microsoft says contents of personal conversations won’t be used to serve ads. "We don’t read your messages or attachments to send you advertisements. Period."

At the top of Outlook.com is where the main features and navigation elements reside. A Windows Phone-like smiley face gives you access to the Messaging part of Outlook.com — to use Skype calling, Facebook chat, and Windows Live Messenger. There is also a settings menu to quickly change colors and reading pane settings alongside a user menu drop down where you can toggle status and other account settings. The optional reading pane will switch the view to a four column layout with a message preview on the right-hand side. A trio of Metro style icons also provide access to switch between Mail, People, Calendar, and SkyDrive from a dropdown menu at the top of each section. 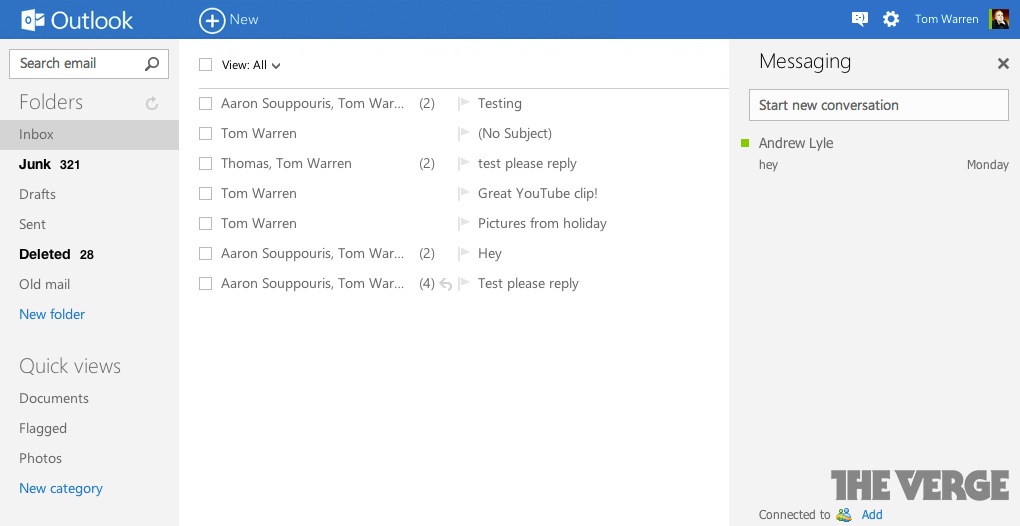 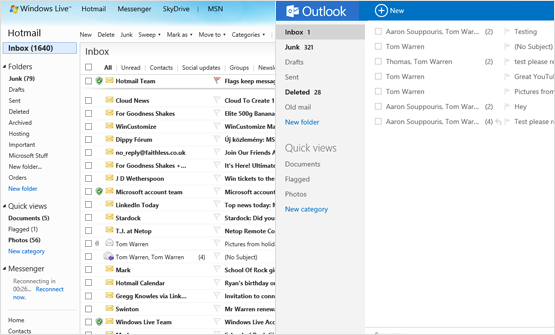 One change to the layout and functionality of Microsoft's webmail client is the switch to default threaded conversations. Traditionally in Hotmail, Microsoft never grouped message conversations together by default, although the option is there for users to switch on. In Outlook.com, threaded messaging is enabled by default, surfacing a feature that many Hotmail users are likely unaware of. Hotmail’s legacy hasn’t been removed entirely, Junk, Sweep, and Quick View settings all remain from Hotmail, and Microsoft has ensured that right clicking on most elements in Outlook.com will provide the usual context menus. Instant actions, such as mark as unread, delete, or flag also appear inline in the message list.

Hotmail's Active Views, which display images or YouTube clips in a preview format within an email, are still present in Outlook.com with no major enhancements to note. Word, Excel, and PowerPoint Web Apps are all built-in, so documents can be opened and edited on the site. As you'd expect, Microsoft is also pushing its SkyDrive cloud storage service here, providing the usual 7GB of free storage to share photos and video content on SkyDrive for emails, which should help free up email attachment headaches. Unfortunately, there’s still no sign of offline mail support. If you pull the plug on your connection then you’ll only be able to load emails you’ve previously cached.

Contact management has been greatly improved with an interface that’s nearly identical in looks and functionality to Windows 8. Outlook.com will import Twitter, Facebook, Gmail, LinkedIn, and CSV contacts and attempt to merge them into single contact cards. This works well for the most part, but there's also an option to clean up any rogue contacts and merge information easily. The right-click options from the Mail side of Outlook.com are curiously absent from the People section, which means you’ll have to resort to the top bar to manage contacts. It was irritating to have Twitter contacts throughout my contacts section, but useful to have them integrated into contact cards — yet I couldn't find a way to filter contacts like you can in Windows Phone (update: Microsoft has added a filter in the settings drop down). There are only options to view all, available, or favorite contacts. If you fill up your contacts with photo information and link them to Facebook then it certainly makes for a much nicer experience in the Mail client of Outlook.com — providing avatar pictures in conversations. 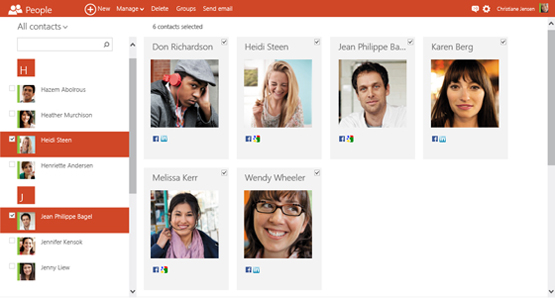 One particular section that hasn't benefited from the Metro makeover is Microsoft's Windows Live Calendar. Using the test version of Outlook.com it remains the same as the existing one available in Hotmail today, which makes switching between the two interfaces a little jarring. 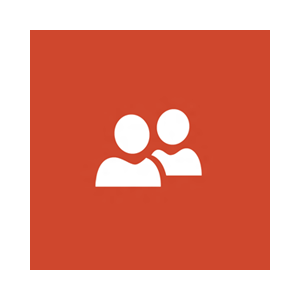 Microsoft is also tying together its new email service with support for the latest mobile and smartphone devices, along with a tightly integrated aspect to Windows 8. If you're an Outlook.com user and you sign into a Windows 8 PC with the same Microsoft Account then the Mail, Calendar, and People apps will be automatically configured with Outlook.com's email, schedule, and address book. The support goes much further than this. I tested Outlook.com across a variety of devices, including a Windows 8 tablet, Apple iPad, and an Android tablet. The interface is clearly designed for touch and the targets are easy to hit with your finger. Animations are also present on mobile devices, adding a little style to the often dumbed down approach to mobile webmail. 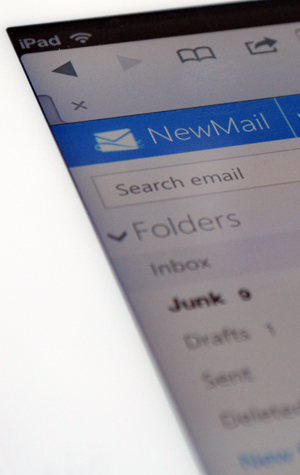 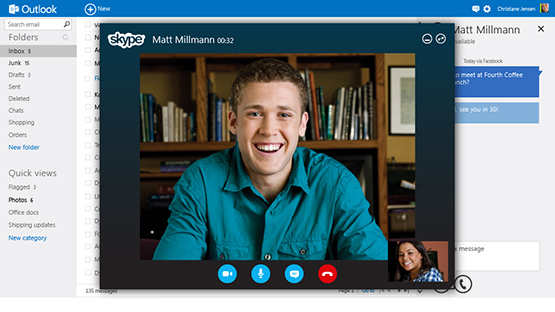 Aside from the look and feel, future Skype integration, and improved contact management, Outlook.com isn’t a drastic change from what’s already avaiilable in Hotmail. Microsoft still isn't supporting IMAP in Hotmail or Outlook.com, which is disappointing for Mac users who want to avoid using POP3 and use clients such as Sparrow to access Hotmail. The big new additions in Outlook.com appear to be Skype video calling from your Inbox, which isn't present right now but I'm told is "coming soon," and the impressive integration of Facebook, Twitter, and LinkedIn contacts into the Address Book (People). Microsoft doesn't appear to have reduced spam in Outlook.com; I still regularly receive junk mail in my Inbox on the standard setting — with the only other option to switch to send everything to junk except messages from my contacts and safe senders. Gmail on the other hand does a fairly good job of filtering out spam for me, but that could be down to the age of my particular Hotmail account — an original from Hotmail’s pre-Microsoft days.

Outlook.com is only opening in preview today though, so I'd hope to see some additions over the coming months. Microsoft appears to be pitching this at Hotmail users for now, but it's clearly a new system and interface that it doesn’t want to force onto existing users — providing them the option to upgrade. It's a great approach to surface conversation threads, SSL by default, and other Hotmail features that may have been buried — but most importantly it provides a fresh approach to the company's webmail. The software maker believes this fresh look will appeal to customers using Windows 8 or Office 2013 and who know more people on Facebook and Twitter than on Google+ — probably due to the lack of integration with Google+. If you’re a fan of simplicity and less clutter, or you use Outlook regularly, then it’s well worth registering for an @outlook.com email address. Likewise, if you’re an existing Hotmail user and you long for a professional looking, cleaner user interface then this is definitely for you. Gmail fans might need to customize the Instant Actions, categories, archiving, and keyboard shortcut settings, but overall there’s some useful mail features in Outlook.com that will appeal to the majority of webmail users.