Yahoo's television companion app IntoNow has hit version 3.0. The app, which provides TV viewers with actor biographies, trivia, and realtime group discussion as they watch their favorite shows, now includes the ability to identify songs that are playing during a show. Dubbed Music Sync, the feature uses IntoNow's SoundPrint technology to identify what you're watching and the music that's playing, and serve up iTunes and Youtube links once it's found a match. It's ostensibly a direct competitor to apps like Shazam, but Yahoo hopes you'll actually use Music Sync if it's always at your fingertips while you watch.

Yahoo has also added CapIt, a feature that brings the Internet's love of memes to the masses. Tap the CapIt button and IntoNow will pool together a few still images of the show you're currently watching. You can then add captions and share the images with other IntoNow users, or on Facebook and Twitter. Finally there's the revamped Group Chat feature, which lets fans of a particular show have private group conversations. While IntoNow is available on Apple's App Store and Google Play, version 3.0 (and all of its new features) are exclusive to the iPad, iPhone, and iPod Touch. The app is a free download, and available now. 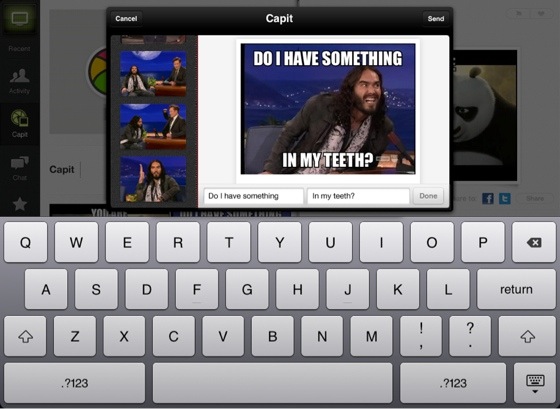