Amazon today updated its Cloud Player service with a scan and match feature that will automatically upgrade eligible songs in your iTunes or Windows Media collection to 256kbps audio files in the cloud.

Those licensing deals Amazon signed with major record labels just paid off: the company has today updated its Cloud Player service with a scan and match feature that will automatically upgrade eligible songs in your iTunes or Windows Media collection to 256kbps audio files in the cloud. The new format will replace prior tracks you've uploaded (which will remain available in an archived folder) the next time users sign in, and Amazon says the entire process shouldn't take more than a few minutes. From there, all music you import in the future will automatically be matched in the same fashion so long as Amazon has the necessary rights to do so. If a particular track or album can't be matched, it will need to be uploaded manually.

To coincide with the new matching service, Amazon is also changing the subscription model for users that want to stream music from the cloud. Anyone will be able to store up to 250 songs with Cloud Player at no cost, but if your library demands more storage you'll need to sign up for Cloud Player Premium. Priced at $24.99 annually, this option allows users to import up to 250,000 songs in Cloud Player. Like before, Amazon MP3 purchases will not count against this allotment: it only applies to music you've obtained elsewhere. 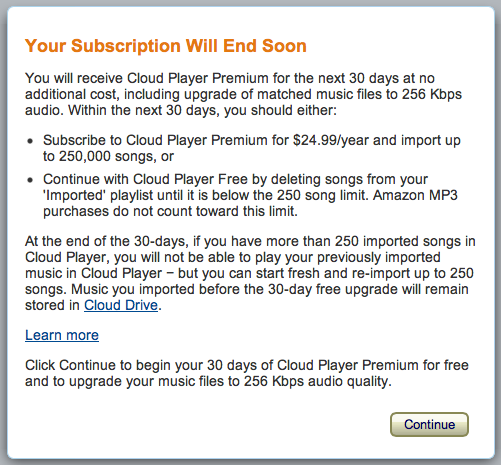 The news also means that as of today, Cloud Player and Cloud Drive are considered separate subscriptions, though customers who've signed up for the latter will receive Cloud Player Premium at no additional cost during the remaining term of their Cloud Drive plan.

Amazon has also introduced a number of nice upgrades to Cloud Player with the latest update. First and foremost, you can finally edit metadata for the songs in your library. Further, past Amazon MP3 purchases (that qualify for matching) no longer need to be manually imported into Cloud Player — they'll instantly appear with the rest of your library. In terms of playback, the same limits apply: you can use Cloud Player on up to 10 devices with a single Amazon account. As part of the announcement, Amazon has also revealed that Cloud Player will soon be coming to Roku and Sonos media players.