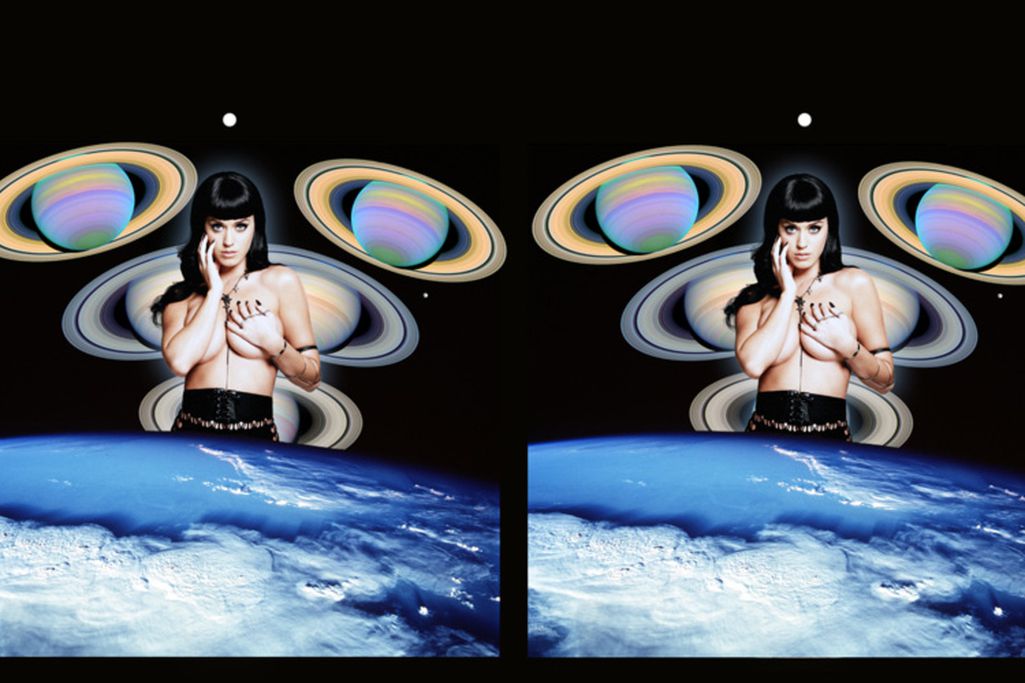 Sitting down to read a website with a name as loaded as The Verge, you take some sort of comfort in the fact that you have an edge on your friends. Developments at the intersection of technology and culture are second-nature to you, and your mastery of networked content — digital and otherwise — is something your contemporaries are guardedly envious of. You are a nerd in the post-Weezer sense, proudly sporting a Frauenfelderesque enthusiasm for the digitized world: you are so persistently aware of what’s next, in fact, that you find yourself wondering if there might be something important you’re missing, another dimension of clarity beyond the feeds and updates that help you keep your edge. With such a heavy investment in the near future, now every bit as predictable as the recent past, the present has slipped right through your Power Glove’d fingers. Luckily, the confectionist offspring of Alanis Morrisette and Miley Cyrus has sprinkled a trail of saccharine breadcrumbs back to now. Mercifully for this website’s target demographic, she loves to shoot things out of her otherworldly and perfectly-oiled breasts.

Katy Perry: Part Of Me 3D opens with a clutch of YouTube rips: a crowdsourced montage of tween girls of all ages and genders reciting Katy-derived mantras before the altars of their poster-coated bedroom walls. The webcam'd testimonials float in a window above a bed of swirling fireworks: "She taught me it was OK to be weird." "Never take life too seriously." "She made me believe in myself." The audience then peers through the laptop lens of an 18-year old Perry, in exactly the same frame and only slightly more polished than her predecessors, repeating their mantras in her own voice. Her case is built before the movie even begins in earnest: I am different, and I am just like you.

No matter how trite or contrived your media-hardened heart may find this sentiment, the rest of the movie continues to make this case for her compellingly. One way Katy Perry isn't just like her audience is that MTV Films produced a major motion picture about her in 3D. With the psychedelic candyland of the California Dreams tour as its centerpiece, Part Of Me ramps up with a mini making-of documentary, behind-the-scenes rehearsals and costume prep with candid interviews and background about the star, all in 2D. It's here we see her growing up and without her makeup — a common enough sight for anyone who's delved into the vast ocean of KP media. We sail through two dimensions efficiently enough until the final moment before she enters the insanity of the first show, Barbie-perfect, pinwheel peppermints slicing an overtly-suggestive pattern in the air above her sequined bodysuit. The hydraulic platform begins its ascent to stage level, wavering with the two-dimensional truth of a handheld camera. 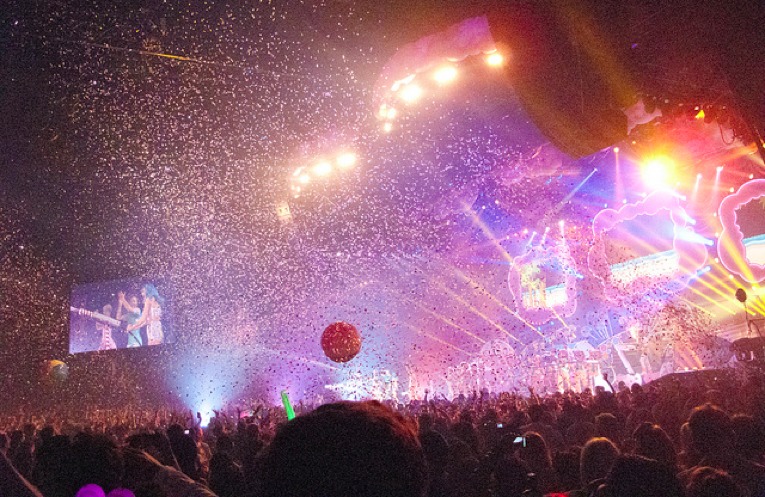 The first shot of full-force Hollywood production washes over the audience as the cameras crane out away from the candy queen, the depth of her stage and performing cast stretching out into the third dimension all around her. It's here that the story of Katy Perry's leadership amongst hordes of adoring peers arises. Some ancient titans of filmic luddism claim 3D doesn't "work" on a technical level, but Part Of Me builds a parallel narrative off of the flat screen and tells a social media-fueled story that is best expressed in the 2012 version of cinematic stereoscopic imagery. The California Dreams tour was a Cirque-caliber masterpiece of spatial and temporal choreography amongst musicians, dancers, video, lighting, pyrotechnic, and wardrobe artists — a fantasy of a beautiful girl trying to find her prince in a real-life Candyland, heckled by a morbid butcher intent on making mincemeat of the pair. The search brings obstacles that trace vignettes of Katy Perry's songs themselves.

In its translation from PG-13 performance art to mass-market PG movie, the tour loses its internal narrative structure; Katy Perry's personal life fills in the gaps, nearly always in 2D, but the script never goes more than a few scenes without another taste of Candyland.

The most innovative and emotive moments in Part Of Me bring ground-level narrative and 3D expression together. The rise and fall of Katy Perry's relationship with ex-husband Russell Brand is documented with a handful of visual aids to depict Brand as the sole source of negativity in her colorful world. From his first appearance he is bathed in a greasy leather aura, a fading archetype of 70s rock n' roll scumbag who always finds a way to taint a pure heart. No scene with Brand is depicted with any amount of third-dimensionality, separating him from the film's most soaring moments. A series of sequences describe the increasingly neglectful arc of Brand's marital commitment ("Shouldn't he be coming to you?" "He should, but he's not. It's really cray-cray") and follow Katy Perry's constant hurt up to the inevitable divorce played out in the popular media. As a camera flies free over a dark city, @katyperry mentions spring to life between buildings. The paneled tweet boxes, complete with actual URLs, explode from the skyline, giving her the support she needs to ultimately overcome the pain of being deserted. This shimmeringly 3D scene, along with a Sao Paolo vignette where the massive audience chants to an obviously-distraught performer "Katy Eu Te Amo," define a new audience-performer paradigm in a the world of pop globalization. Celebrities, swarmed by ever-growing audiences, are never more than a tweet away from direct contact with individual fans. Just as her followers rely upon her songs and media presence for inspiration and strength, Katy Perry leans on them — through a virtual or real-life throng — to survive the crushing intensity of a breakdown in the center of a 24/7 pop media cycle. In the audience we feel the force of @katyperry messages just as forcefully as we feel the loving mass of Brazilians, a new self-aware symbiosis between artist and performer thrust into our personal depths of vision.

This isn't a completely new technique. MTV Films pioneered this 3D social media representation in last year's Justin Bieber biopic Never Say Never, and Part Of Me is obviously cut from the same cloth. Both films use the third dimension to describe the stars' innovations in the newly-vital field of networked emotion. Never Say Never opens with a bizarrely beautiful 3D representation of Google search results auto-documenting his rise to immortality; layers mushrooming upon layers of Twitter mentions stack up into our visual stereo field to evoke emotions we didn't even know existed. Both films deep-dive on their stars' signature depth-dependent anomalies: Bieber's floppy mop takes on a life of its own in a 3D showpiece, an edgy hair porn that predicts the vitally-un-flat new life Katy Perry's projectile breasts are awarded as they are literally shoved into audience's faces in a confetti-confection explosion.

But where Never Say Never (John Waters’ #3 movie of 2011, BTW) is quite literally the story of a god made to walk amongst tweens, Part Of Me is the quintessential American story of perseverance and the subsequent pratfalls of success. Katy Perry’s already-confusing simultaneous marketing to innocent children and tainted adults becomes a problem for the film here: in what I assume to be an attempt to achieve a PG rating, her vitally dirty and complex universe has been scrubbed to a frustratingly perfect sheen, flawed just enough to be noticeable, but not enough to seem completely real. Offensive language is clipped in the confusingly acceptable Black Eyed Peas’ "Dirty Bit" mold. Katy’s evolving (read: realistic) attitude towards her parents’ overbearing pentecostal parenting is only mildly referenced through her exposure to Alanis Morrisette’s "Jagged Little Pill" and her father’s onscreen presence where he comes across as a perplexing cross between Elton John and Jack Nicholson.

Since Katy Perry seemingly has a larger hand in her own production than does Justin Bieber, it’s frustrating to mature audiences (read: ones that don’t have to have their parents drive them to the cineplex) that she self-censors her real travails in her visual output. Most recently, the lyric video (a new notion that warrants its own separate exploration) for "Wide Awake" demonstrated a similar cleansing: the simple visual of the song’s words, more or less telling her tale of fame and heartbreak, appear amongst her Facebook updates since May 2010. The timeline is curiously devoid of any mentions of the British scourge of her life, once again leaving only a touch of harsh reality instead of its full, naked impact. 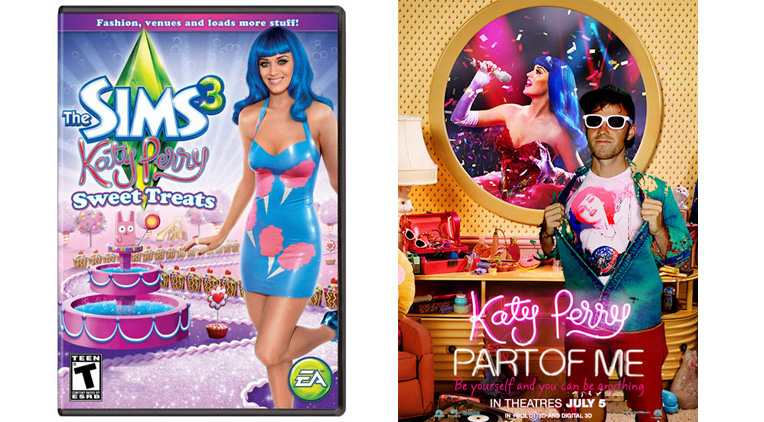 It might be a selfish impulse, but I think Katy Perry wouldn’t lose anything by visually marketing herself more along Lollipop Chainsaw lines than the lines of The Sims. Lyrics bordering on the psychosexual (alien probes, prescription drug abuse, and polyamory spring first to mind) dictate that there’s a much deeper visual language for her to explore. Her parallel path with Nicki Minaj (Katy’s reality check coming out of wholesome Christianity, Nicki’s softening from her Queens origins) has already brought them their own doll-based immortality; now I’m looking forward to a Minajian Katy Reloaded, the director’s R-rated Part Of Me, a multidimensional director’s commentary as Blu-ray extra. And I’m pretty sure she’ll get there — after all, her global walk has only just begun. 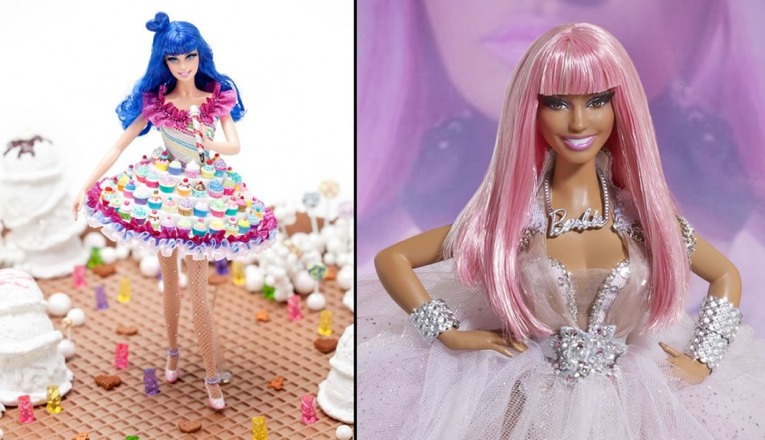 But let’s not think too hard about the future — these two! They are the present. Part Of Me has lots more dazzling moments in store, all gems of insight into creating a positive three-dimensional now that’s worth wading into: a scene finalizing the cell phone’s dominance as the definitive illumination technology to raise at an arena rock show, the popularization of the fart soundboard, and a revolutionary cross-platform approach to mobile phone platforms (she’s a BlackBerry girl AND an iPhone girl at the same time). But any more than this would amount to a spoiler alert. If you’re a fan, you’ve probably already got your tickets. If you’re still feeling a bit nerd-jaded, limiting your 3D film experience to humdrum cave tours with German fetishists, at least check it out for the lasers, whipped-cream/confetti cannons, and breast-mounted Hershey’s Kisses. If you don’t come out smiling, or if you won’t even try, then get off my lawn.