The venerable Droid Incredible is back with LTE to see if a small, throwback form-factor can hold up against bigger phones

The Droid Incredible line on Verizon has always been a sleeper favorite. Although the series never seems to have gotten the full marketing muscle from the carrier, HTC gave the original Incredible and the Incredible 2 decent specs and unique design language that garnered a well-deserved fanbase.

Now, the third iteration in the series has arrived with the Droid Incredible 4G LTE. It takes the basics of the previous two phones and updates them with elements from HTC's flagship One X, but a One X this is not. Instead of the large screen and thin body, this phone has a 4-inch screen and a relatively thick form factor. The Droid Incredible 4G LTE is more of a mid-range phone than a flagship, a point reflected in its $149.99 on-contract retail price. There's still a bit of the One X in this little phone, as it is still running Android 4.0 with HTC's Sense UI on top, but can it compete with the likes of the Galaxy S III? Read on for our full review.

The design elements of the Droid Incredible 4G LTE are classic HTC — for better or worse, depending on your take on the style. What used to be a forward-looking design is decidedly retro now. The rear of the phone is its most distinctive part: featuring angular design motifs and a large ribbed area that's easy to grip but a little prone to picking up pocket lint. It's made of a soft-touch plastic that holds fingerprints at bay, and is removable to reveal the battery, microSD slot, and micro-SIM slot.

There's no denying that the phone is relatively thick by today's standards. With a 4-inch screen, HTC had to find some way to accommodate the 1700 mAh battery and going thicker rather than taller and wider was really the only option. The 0.46 inch thick body still feels quite nice in the hand, however, as the sides have a good mix of curves and angles.

Up top are the red power button and wide, red speaker grille, another classic Incredible design touch. Alongside those are a red charging / notification light and the front-facing camera. At the bottom we have HTC's preferred Android 4.0 buttons: back, home, and multitasking. That means that in many apps, the bottom portion of the screen is taken up by the menu button, a hack that was barely acceptable on the large One series models but that really grates here on the smaller screen. 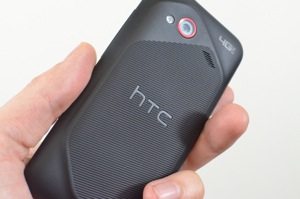 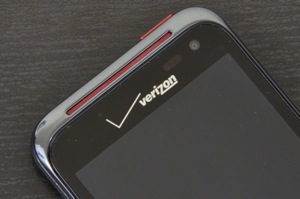 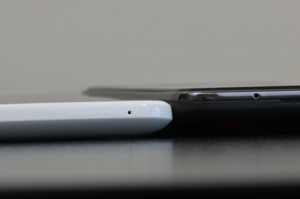 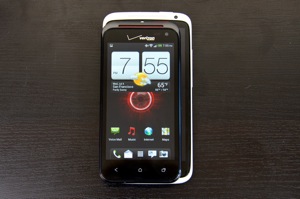 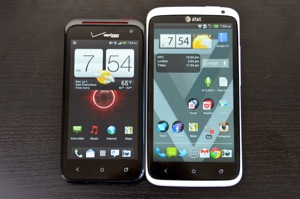 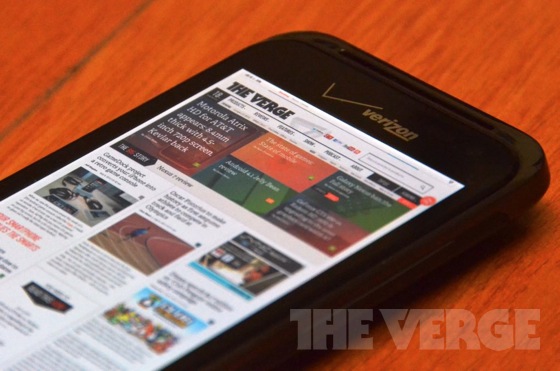 The display is the most important element on any smartphone, and on the Droid Incredible 4G LTE the screen is a study in compromise. With a 4-inch Super LCD display at qHD 960 x 540 resolution, the screen is just as retro as the Incredible's looks. Four inches is rather small by today's Android standards, but it's possible that Verizon believes that there's still a significant market of users who want a smaller phone.

If that describes you, you'll be happy to know that the screen does look pretty good, thanks to the decision to go with Super LCD instead of AMOLED. Viewing angles, brightness, and visibility in sunlight are all sterling. My main complaint is that it's a relatively low resolution by today's standards, 4-inch screen notwithstanding. With a pixel density of 275 ppi, I can't say that I was seeing jagged edges on fonts and icons, but there's no getting around the fact that competing phones simply let you see more on the screen. The keyboard, especially, was a little difficult for me to get used to on the small screen — and strangely the Swype trace-to-type option was off by default.

If you've read our review of the HTC One X or the One S, then the Droid Incredible 4G LTE will be familiar territory for you. It's running Android 4.0 with the latest version of HTC Sense on top, which means you're in for a port of Android whose look and feel owes more to HTC's Drew Bamford than Google's Matias Duarte.

As with HTC phones running Android 4.0 and Sense 4, multitasking is done with horizontally-scrolling "cards," the lock screen allows you to instantly open four custom shortcuts, and there are more HTC widgets and options than you can shake a stick at. One unfortunate thing that I noticed is that the email account setup seems to happen before the Google account setup, so I found myself accidentally setting up Gmail in HTC's email app instead of as a base Google account.

However, the Incredible diverges from the rest of the One series thanks to Verizon. As a "Droid" phone, it of course defaults to using the classic, spoken "DROOOID" notification for everything. As usual with mid-range phones, there's a big set of carrier apps to contend with — in fact, the launcher comes with a default "Verizon" tab where you can see some of the software the carrier has opted to include. Verizon asks you to set up "Backup Assistant Plus," which backs up media to its cloud, offers the entirely superflous VZ Navigator, and even a few game demos. Unfortunately, these apps cannot be uninstalled.

There's an app called "Verizon Video," for example, which prompts you for an update as soon as you launch it — an update that as of this writing isn't actually available, so the app doesn't work. Verizon is also bundling its own app store, simply called "Apps," that is a curated subset of the Google Play store. Installing apps from Verizon's store is actually relatively painless. Apps I purchased there showed up as installed in Google Play, so there doesn't seem to be any app fragmentation to speak of (they also installed with no issue despite the fact that I had apps from "Unknown Sources" disallowed in my security settings). 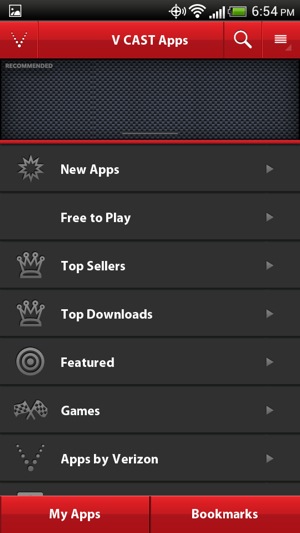 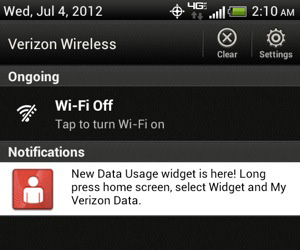 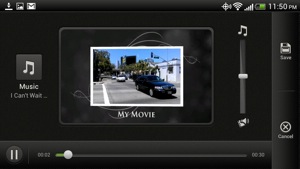 While I get a rich and deep sense of schadenfreude deriding carrier apps on mid-range phones, I receive no such dark pleasure from another design decision. The Droid Incredible 4G LTE is just crazy-aggressive about getting you to turn on Wi-Fi and then just as aggressive in letting you know that Wi-Fi is turned on. By default, if you're not connected to a Wi-Fi network, some apps will pop-up the Wi-Fi settings to exhort you to connect. In some cases, it will automatically turn Wi-Fi on when you launch an app. What's worse, your connection status, whether connected or disconnected to Wi-Fi, is a permanent fixture in the "Ongoing" section of the notification drop-down.

I've spent a non-trivial portion of my time reviewing this phone trying to figure out how to dismiss this notification, to no avail. For a phone that gets such incredible speeds on Verizon's robust LTE network, I find it odd that "The Network" is so desperate to get me to use Wi-Fi.

At the end of the day, though, the Droid Incredible 4G LTE is running Android 4.0. If you're not allergic to HTC's take on it with Sense 4, you'll find ways to ignore Verizon's additions. Once you do, you'll be left with a fast, stable, and modern OS, though of course we don't know when (or if) HTC will update it with Android 4.1. 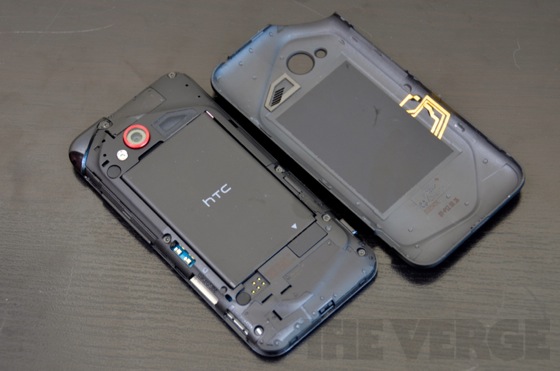 The Droid Incredible 4G LTE runs on a dual-core Qualcomm S4 Snapdragon processor clocked at 1.2GHz that's backed by 1GB of RAM. The combination is enough to make it feel fairly zippy in my testing, though it is marginally slower than the 1.5GHz One X. As you can see in the video above, the Incredible does struggle a tiny bit in the web browser, but only when I was pushing it to scroll extremely rapidly.

While the Droid Incredible 4G LTE isn't a slouch, it doesn't quite keep up with the Samsung Galaxy S III or even HTC's own One X. Compared to other Android phones that are in the same "mid-range" category like the Motorola Droid 4, the S4 processor helps the Incredible stand out. As with other recent HTC devices, I found that apps do close in the background a little more often than I would prefer, but that's not the deal-breaker for me that it is for some power users.

As for the network, Verizon is still the gold standard for LTE and in San Francisco my speeds are just embarrassingly fast: I never saw speeds below 9 Mbps and regularly saw numbers over 20 Mbps. Call quality is stellar and the speakerphone is not half-bad.

On the 1,700mAh battery, I managed to drag it down to 15 percent after around four and a half hours of very heavy and data-intensive use. Continuously running a YouTube video over Wi-Fi at 65 percent brightness drained the battery in just over four hours. Those are intensive tests, so this Incredible should last a day, but I can't guarantee that it will. Perhaps the slower clockspeed and intrusive Wi-Fi notifications are both hedges against what I fear is sub-par battery life. On the bright side, the battery is at least removable. 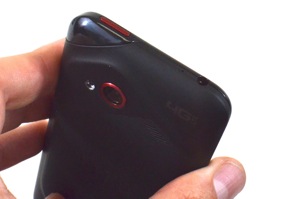 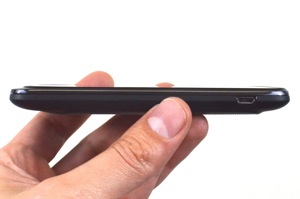 The camera is a bright spot on the Droid Incredible 4G LTE. It appears to be the same sensor as what's on the One X series, but it's not clear whether it has the separate "Image Sense" chip on board. Even so, I'm getting similar results with the camera. The shutter clicks instantly and the images are clean and noise-free. Even in low light, I was able to compose a few nice shots in situations where I normally wouldn't have even bothered trying. It can shoot video at 1080p at 30fps and you can take images during recording. Here again the phone comports itself about as well as HTC's One series. 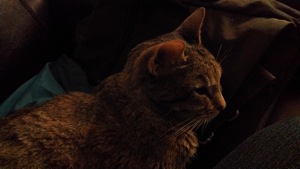 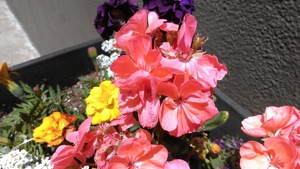 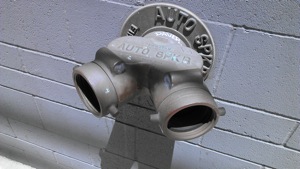 An Android phone with a 4-inch screen feels almost quaint

The Droid Incredible 4G LTE is essentially the little brother to HTC's One series. It has a decently fast processor, Android 4.0, and a rather good camera. HTC has put together a surprisingly nice little phone, but you will have to look past a lot of Verizon's crapware to appreciate it. It's also difficult to forget just how much better the One X is compared to this phone, with a better and larger screen, improved build quality, and more modern industrial design.

To be blunt, an Android phone with a 4-inch screen feels almost quaint today. Even if that's the size you're looking for, the 960 x 540 screen resolution should give you pause. At $149.99 on a two-year contract, it's only $50 less than the Galaxy S III — a superior phone in almost every regard. The Galaxy Nexus is also $149.99 and is set to receive the Jelly Bean update in short order. With those alternatives on Verizon, you will need to be completely dedicated to the idea of having a smaller phone to consider the Droid Incredible 4G LTE.