Stranger Visions: a genetic surveillance project goes snooping for pieces of ourselves

Stranger Visions: a genetic surveillance project goes snooping for pieces of ourselves

With corporate and government snooping on the rise, many of us have become more mindful of the electronic footprints our online activities leave behind. But there aren't any privacy settings to deter the kind of surveillance that information artist Heather Dewey-Hagborg is modeling with her new project: a genetic intelligence database of computer-generated 3D profiles constructed from found hair samples.

With websites, corporations, and governments peeking at our activities both on and offline, many of us have become more mindful of the electronic footprints our online activities leave behind. But there aren't any privacy settings to deter the kind of surveillance that information artist Heather Dewey-Hagborg is modeling with her new project: a genetic intelligence database of computer-generated 3D profiles constructed from found hair samples.

Premiering last weekend at an open studio showcase for residents of New York City's Eyebeam art and technology lab, the project, Stranger Visions, began with a simple but profound realization: we are leaving physical traces of ourselves everywhere, and tools to unlock the secrets behind those traces will soon become more accessible than ever before. 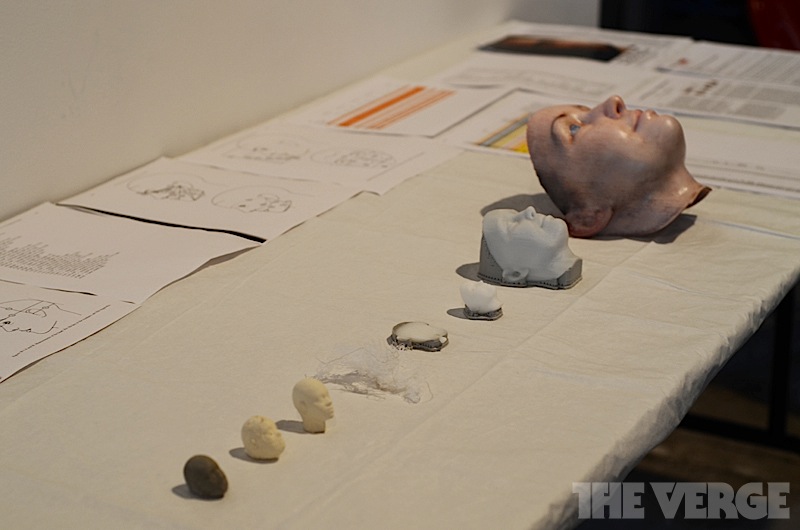 Dewey-Hagborg says it was a single strand of hair lodged precariously between the glass frame of a painting that got her to thinking about the origins of this ubiquitous human detritus. "I had never considered the emerging possibility of genetic surveillance," she says. "That the very things that make us human: hair, skin, saliva, become a liability as we constantly face the possibility of shedding these traces in public space, leaving artifacts which anyone could come along and mine for information." She points me to a story about a geneticist whose attempts to determine the origin of a murderer from a semen sample caused the Dutch government to pass new regulations on DNA phenotyping in 2003. "It was part of my early research and I think that the issues that article raises are integral to the piece." Today, the Netherlands remains the only country to have explicitly restricted such practices.

The premise might bring to mind the fictional dystopia depicted in Andrew Niccol's 1997 sci-fi film, Gattaca. But Stranger Visions isn't a tribute — it's an actual proof-of-concept. Collaborating with Genspace, a DIY bio lab and hackerspace in Brooklyn, Dewey-Hagborg found herself in the role of an amateur gene sleuth, aiming to make the genetic forensics equivalent of police sketches. Collecting hair samples from bathroom stalls and other public spaces, she extracts known predictive traits from the sequenced genome — race, resistance to diseases, eye color, etc. — eventually using the results to chart ancestry across a large printed map and generate 3D portraits of her unwitting, anonymous subjects.

Dewey-Hagborg's own genetic self-portrait, fabricated into a physical likeness, proves the procedure to be eerily accurate. As for the rest of us, expensive gene sequencing equipment is still preventing mass-adoption of the practice, but it won't be for long: recent developments suggest the costs of sequencing the genome will soon fall below the $1,000 range. For now, a table of petri dishes containing human hairs, with a monitor above displaying computer approximations of their owners, serves as a powerful and chilling demonstration of the bioethical minefield that may very well await us.

Stranger Visions is on display all this month, along with many other open studios projects, at the Eyebeam technology center in Manhattan. The exhibits are free, but you can show your support by donating to Eyebeam's Kickstarter campaign, which ends today.