Patent number 8,212,859 issued to Apple this last Tuesday on head-mounted display technologies, but it isn't going to shut down Google's Project Glass.

Intellectual Properly is a series where we seek to set the record straight on the day's hottest patent, copyright and related intellectual property issues in the tech world.

Every Tuesday comes with a risk of drama because, like clockwork, that's the day the US Patent and Trademark Office publishes newly-issued patents for the general public — and Apple is frequently in the mix. This last Tuesday was no exception: introducing the world to Apple patent 8,212,859. With a title like "Peripheral Treatment for Head-Mounted Displays" and a description that proclaims a system for "projecting a source image in a head-mounted display apparatus for a user," it's no real surprise that many are predicting Apple will use the '859 patent to shut down Google's Project Glass. We can all exhale in relief, because that's not going to happen.

we need to, we must, read the claims

The '859 patent was filed in 2006 and the issued claims — which alone define and limit the applicable scope of the patent — are for a device very different than Project Glass. Let's take a look at the broadest claim:

17. A computer-implemented method for projecting a source image in a head-mounted display apparatus for a user, the head-mounted display apparatus having a first display operable to project a first image viewable by a first eye of the user and a first peripheral light element positioned to emit light of one or more colors in close proximity to the periphery of the first display and, the method comprising:

dividing the source image into a left image and a right image;

The sheer number of words and details in that claim alone imply that this isn't a blanket patent on all head-mounted display gear. However, we can never rely on gut feelings to define patent coverage, so let's take a few of the claim elements in context and see what we've got here. You can see right off the bat that the claim requires two displays, with each projecting a unique image to the user. That by itself takes Project Glass out of the running. However, the claim further requires specific image and color combination processing on a headset with two distinct displays and separate peripheral light elements. Again, something the single-display Glass device doesn't include. In response to a Patent Office rejection of its pending patent claims, Apple even emphasized its two-display construct as a unique feature, admitting the claim "requires that the source image be divided in to left and right images which are then processed separately and ultimately displayed separately to a left eye and a right eye independent of each other." 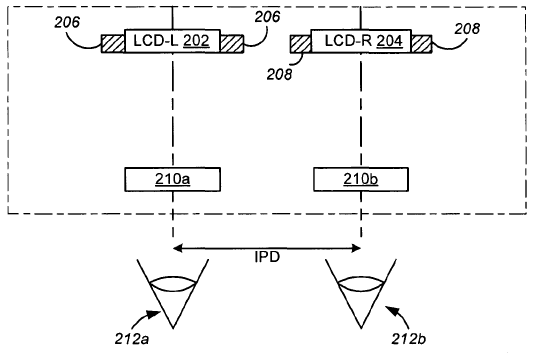 Does this mean Apple can't, or won't try to, expand its patent coverage in the future? No. In fact, it's worth noting that before the '859 patent was issued, Apple filed a continuation application — a related child application that shares the same disclosure details, and 2006 priority date, but can issue into a new patent — that it will surely use to go after broader coverage on head-mounted display devices. However, Apple's ability to get the kind of patent coverage needed to go after Google's Glass technology is seriously limited by the experimentation and innovation in this area that predated the 2006 filing date of its patent. Everything done in the years and decades before 2006 serves as prior art to limit the potential scope of future patents. You can check out our in-depth feature on the topic, Project Glass and the epic history of wearable computers, to see just how much is already out there.