There are only so many ways to skin a cat, so what's the 890L's raison d'être?

“I think I can rip out this review in 20 minutes,” I told David Pierce, our Reviews Editor, after having used Verizon’s Jetpack 890L on and off for a couple of weeks. I was joking, but not really.

“‘It gives you internet,’” he said, an offer of copy for what would be the shortest review in The Verge’s history. And indeed, mobile hotspots don’t really do anything other than “give you internet” — but the fact remains that Verizon offers no fewer than four different models of these little black boxes as of this writing, including the excellent 4620L from Novatel that we reviewed recently. So what sets the 890L apart, and why might you choose it? Read on. 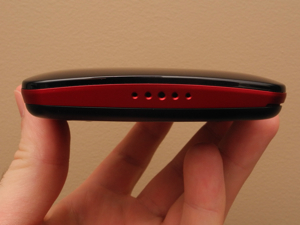 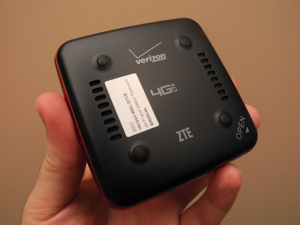 The 890L, sourced from China's ZTE, looks cheaper than the 4620L, and that's because it is: as of this writing, you can get it for $30 less on contract ($19.99 versus $49.99 for the Novatel). At 3.5 x 3.5 x 0.71 inches, it's also a bit bigger, a glossy domed square with three illuminated recesses on top — down, up, and OK — which are capacitive touch buttons that serve as the hotspot's only controls. The side is a strip of matte red plastic where you'll find a series of holes for the internal speaker, the power switch (more on that in a moment), a Micro USB port for charging, and a pinhole reset button. On the bottom you find a black battery cover that's opened by prying one corner helpfully labeled "OPEN." As with most hotspots, a small white sticker on top of the cover identifies the unit's default SSID and password. Underneath the cover, you'll find a second sticker — in case you lose the first one — along with the 1,700 mAh battery (made by Sony, interestingly). Removing the battery reveals the SIM slot. There's no microSD slot on this particular model, a feature commonly found on hotspots these days that allows you to share storage among connected devices. I don't miss it, but some may.

The power switch on the 890L — an actual, physical, sliding switch — is fairly novel among hotspots, and really, among modern consumer electronics in general. I like it for several reasons: one, it leaves no doubt as to the current power state; two, it has a minimal chance of being accidentally activated while in storage; and three, there's no need to press and hold for some indeterminate amount of time to toggle the power on or off. I wish more devices had physical switches like this, particularly hotspots.

Using the 890L is straightforward enough: flip the switch, wait about ten seconds for it to boot and connect to the cellular network, pair to its Wi-Fi network, and away you go. The unit supports up to 10 simultaneous connections (though, strangely, you only get five if you're connected to CDMA instead of LTE).

The web interface for controlling settings looks somewhat different than the one used by the 4520L, though the concept is the same — navigate to "http://vz.hotspot" from your browser and you land on a page where you can control countless hotspot settings on a very granular level, including restricting what devices can connect, controlling security settings for the Wi-Fi network, and toggling the CDMA, LTE, and GSM radios (the 890L works internationally with Verizon's roaming partners like Vodafone). It's easy and straightforward, and the default admin password is the same as the default Wi-Fi password, so there's no drama trying to get in the first time.

The same can't necessarily be said for the 890L's small monochrome OLED display, however: it does a decent enough job conveying current signal strength and the number of connected users from its four-icon home screen, but navigating through the archaic menu structure is a chore. ZTE should've included a back button — but since it didn't, the only way to back out of a menu is to scroll to the bottom of it and select the "back" item. It feels rushed and overlooked by Verizon's QA department, too; for instance, "Software" and "SoftWare" both appear in different places of the UI. It's certainly not a big deal for proper operation of the device, but it conveys an unsettling sloppiness to the user. 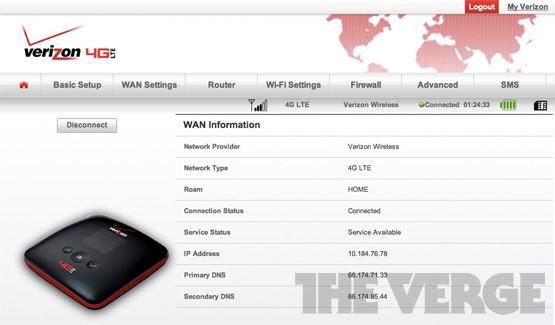 The speeds I saw in a couple weeks of use throughout Verizon's Chicago LTE coverage area were on par with what I'd expect. If anything, the carrier lowballs itself, saying on the hotspot's product page to expect downlink speeds of 5-12Mbps and uplink speeds of 2-5Mbps — in reality, I regularly saw transfers in excess of 10Mbps up, which is good news for those who need to upload a lot of video or other heavy content (yours truly, for instance).

Unfortunately, that performance didn't come without its wrinkles. On several occasions, the 890L inexplicably dropped to CDMA even though I was in solid LTE coverage, and when it would do so, I'd lose data completely on my connected devices — it wasn't just slower, it was gone entirely. The problem was only fixed by cycling power off and on again. You can imagine how that becomes a serious problem if you're trying to upload or download big files and the transfers keep getting interrupted.

On my battery test, I squeezed 5:04 out of the hotspot in decent (three bars out of five) LTE reception, which compares favorably to the 4620L's 3:05 when equipped with its standard 1,500mAh cell. With the extended battery, though, the 4620L wins at 6:40. Though the 890L has no problem charging via any Micro USB cable, I was a little disappointed to discover that you can't use it immediately on a dead battery — like many phones nowadays, I had to wait a few minutes after placing it on charge before it would turn on again. One feature I appreciated was the internal speaker, which rather loudly announces with a series of beeps when the battery is about to die — having used various speakerless MiFis for years, I always hated getting caught off guard when I ran out of juice. 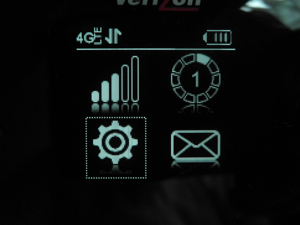 Our review of Verizon Jetpack 890L 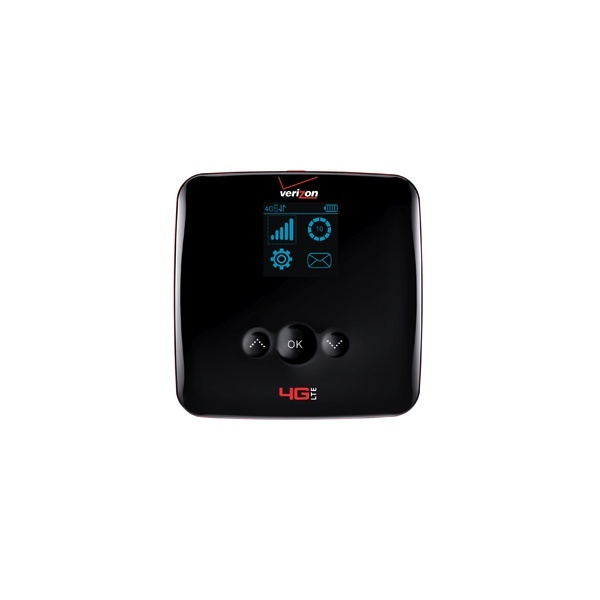 Why does this exist? I don't know

Dedicated mobile hotspots are great; in fact, I'd go so far to say that they're one of the most important inventions of the last decade for road warriors. They're simple, relatively bulletproof ways to move a lot of data to multiple devices at once without being tied down to a landline. Frankly, I don't know how I'd live without one in this line of work.

And on some level, the 890L is a fine hotspot: it does its job reasonably and commendably with a minimum amount of hassle, and it does it for over five hours on a relatively small battery. But the fact is, Novatel's 4620L is a roundly better product with a better UI, better form factor, better materials, and more battery options — and if you're in the market for a hotspot, $30 upfront isn't going to make a difference. I don't know why I wouldn't spring for the Novatel instead, and I don't know why a customer shouldn't, either.