Nike+ Training and Basketball: creating a game inside the game

Share All sharing options for: Nike+ Training and Basketball: creating a game inside the game

Nike has long been known for its highly specific athletics gear. Its shoes are all sold under the same umbrella, but each one is specialized for basketball, cricket, free running, or some individual buyer’s needs. At the same time, the company is one of the most established sources of electronic exercise tracking, starting back in 2006 with a jogging sensor that paired with Apple’s iPod. Nike’s FuelBand tracker, launched earlier this year, can log almost as many forms of exercise as Nike has shoes, distilling its measurements down into a single net metric: Nike’s own Fuel.

Now, the company is introducing two new pairs of shoes aimed at taking the next logical step: turning training and sports achievements themselves into a unified game within a game. We were able to spend some time with both the new Nike+ Hyperdunk and Lunar shoes, getting a glimpse at how they performed — and what they could mean for Nike’s future.

The new shoes feature what Nike is calling the “Sport Pack” — a small plastic puck that slots into the footbed and communicates with the four pressure-sensitive sensors present in each shoe. Like the FuelBand, the puck also contains a three-axis accelerometer, and in concert the system can track how high you’re jumping, how many steps you’re taking per second, and even whether you’re doing specific actions like pushups. While it’s impressive technically, in the end it all comes down to how the shoes work with Nike’s training and basketball apps, which put users through training regimens, measure their performance, and generate the all-important Fuel.

It’s something that’s been a long time coming, given both the popularity of the running app and the company’s penchant for experimenting with footwear. Digital Sport Experience Director Ricky Engelberg estimates the shoes have been in development for two and a half years, but it was only with Bluetooth 4.0 that they became really feasible. “That’s something that has really helped accelerate the development in this last year and a half,” he says. “Knowing that Bluetooth low energy was coming out.”

The pucks charge with an included USB device; they’re supposed to last between 30 and 40 days depending on use. Clicking them into the shoes and setting them to pair with the Training app lets you go through one of six “drill packs,” each branded with the name of an athlete like LeBron James or Hope Solo and designed to boost things like “strength” or “explosiveness.” For now, it’s all free, albeit just a series of workout videos without the shoes, but Nike says it’s going to be selling extra packs down the line. It’s a system that’s practically built for in-app purchases, especially if Nike makes good on its attempt to bring more sports into the Fuel ecosystem. 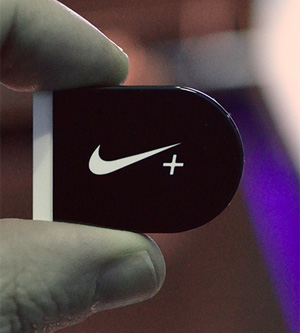 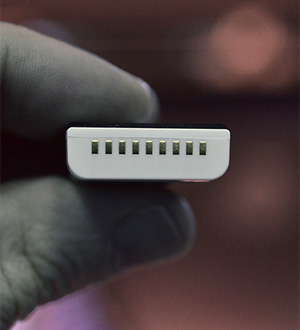 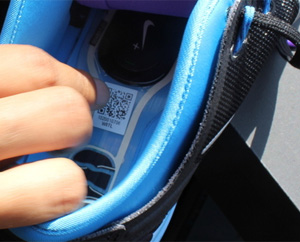 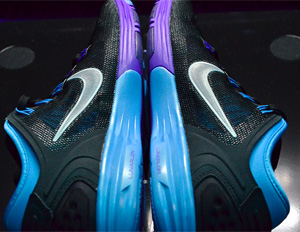 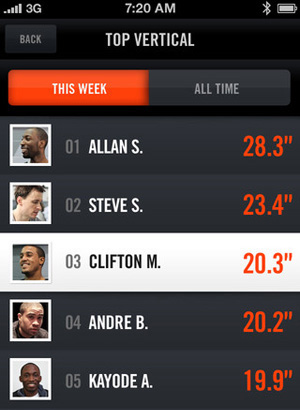 Performing a short set with the Training app feels like the tutorial section of a video game. I’m looking at a large screen displaying the iPhone app, which guides me through jumping and running in place while a team from Nike offers me praise that I probably don’t deserve. “So that’s really good,” an assistant says after I pretend to jump rope for 30 seconds. “But most people, when they see that, they think ‘I want to do this again. I can do better.’” And honestly, I do. Nike is hardly the only company to harness the power of gamification, putting me up against a hard metric of my own creation. Give me an objective number judging my performance, and I’m going to want to beat it. The FuelBand and running sensor both worked on the same principle, but these apps take it several steps further while still incorporating the basic Fuel unit of performance.

It seems odd, then, that Nike’s ur-measurement isn’t consistent across devices. While the shoes and the FuelBand can both generate Fuel from many of the same actions, they won’t necessarily give you the same score. The reasons are technical, Engelberg says. “Something like Nike+ Basketball is made specifically for playing basketball, whereas the FuelBand is more gross activity movements.” The different ways of capturing data results in different scores: “some will use accelerometer, some will use GPS, some will use pressure sensors.” It’s a reminder that Nike tends to gloss over how Fuel is actually calculated — since it’s a loose motivational metric, it’s not always necessary to be exact, but too much variation could end up undermining its value as a scorecard. Much more reasonably, you aren’t allowed to double-count the Fuel you earn when completing challenges. 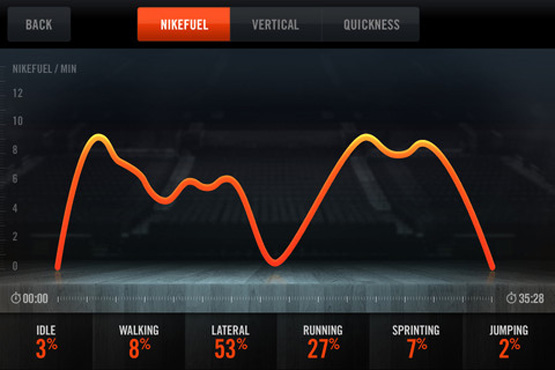 In the Training app, it’s also unclear how useful some of the quickfire practice sessions would be on the tiny screen of a phone. Watching a time clock count down while you try to beat your previous record works well on a large screen, but even if there are audio cues (which I didn’t experience during my time with it) it’s going to be more difficult to get the personal-trainer feel Nike is clearly aiming for. And although the pucks can pick up some more detailed motions than the FuelBand, they still can’t log things like stationary bike rides.

While Training focuses on workouts and live feedback, Nike+ Basketball is meant to quantify what you’d normally do during a game. The technology it uses is often fascinating, breaking down actions we perform without even thinking into a series of complex interactions between sensors and puck. To tell how high you jump, for instance, the shoes track when pressure on the sensors goes from 100 to 0 and back again, then cross-reference that against the motion of the accelerometer.

The longer basketball practice sessions seem more suited to their app than general training ones, letting you practice layups or other drills and then see your overall performance in a chart. If you’re running an obstacle course, for example, you can track your speed without worrying about starting a stopwatch, since the app detects motion. The Basketball app also eliminates the problem of keeping the phone close by during exercise, since you can set the puck to record data and sync it later. 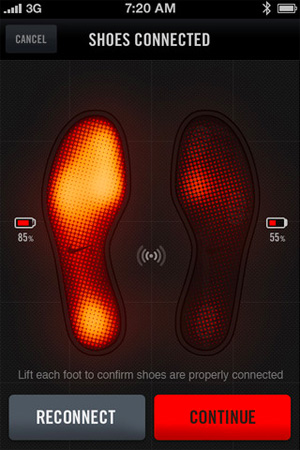 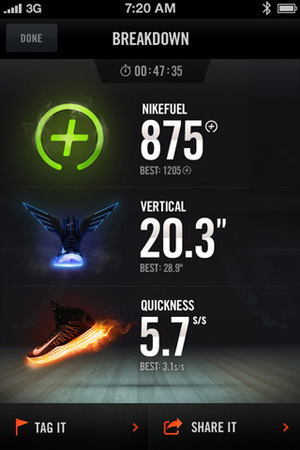 For serious basketball players, some of this data may be tremendously helpful. For many other people, it will probably be abstract at best. Like the FuelBand, however, the individual metrics aren’t necessarily the point. “It’s training as game,” says Engelberg. As such, a large part of the appeal is bragging rights. A friend can use the app to shoot video of you in the shoes and automatically overlay it with metrics, letting you share both your scores and your moves in a way reminiscent of OnLive or other gaming platforms.

For focusing on a team sport like basketball and incorporating athletes from other competitive sports, though, the new Nike+ system promotes curiously solitary activities. It’s possible to share your stats on Nike+ Basketball, for example, but the app doesn’t seem to acknowledge that you’d be playing with or against someone on the court.

Some of this can be explained as a logistical problem: the chances of having multiple sensor-equipped people in a game are slim, at least for now. But Nike also seems to have a vision of sports tracking that becomes a kind of personal achievements system, a meta-sport that bears little connection to the specific activity being performed. “It’s every athlete, your entire network, together,” not just a place for runners or basketball players, Engelberg says. “And that’s really our future: Nike+ is the home for your entire athletic life, connected by Nike Fuel.”

Achievements didn’t stop people from caring about specific video games, and plenty of people have played sports in order to log calories burned or pounds lost. Nike may also integrate more social features for people who use its Fuel systems, just as it recently added Path integration. As technology advances, though, Nike will be given the chance to focus on augmenting individual sports or continuing to merge them under the banner of Fuel. And given its power in the sports sector, the way it does it could end up affecting not only its apps and shoes but the way the rest of us see exercise.

Yes, the new electric vehicle tax credits are really confusing, but we can help