Despite previous statements that it would continue to support developers, Face.com says that it's going to "wind down support" for developer APIs.

When Face.com was acquired by Facebook, the company assured developers that it planned to "continue to support our developer community" — however, it appears as though that is no longer the case. In a email reportedly sent to developers, Face.com explained that as part of its integration with Facebook, it will no longer be able to support its developer APIs. Meanwhile, its homepage says that "we're working with Face.com developers to transition as we wind down support for our APIs."

According to the company the shift away from supporting developers is so that it can "focus on new products at Facebook," though it's not quite clear why there has been such a sudden change from when Face.com was first acquired. But developer APIs aren't the only thing that's going away — Face.com's iOS app Klik has been removed from the App Store, though users still have until July 20th to download any of their photos, after which point all data will deleted. 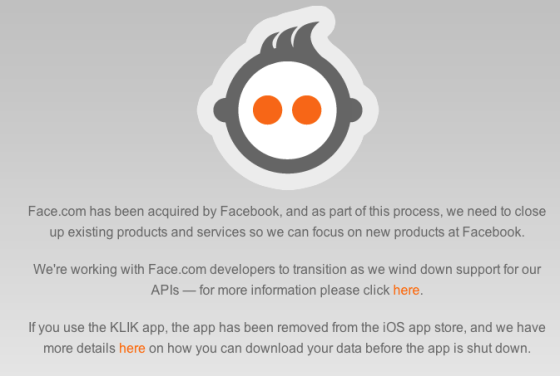