The deluge of competitors to the MacBook Air’s throne shows no sign of slowing, and while the jury’s still out on whether an ultrabook has yet to truly best Apple’s wunder-device there have been a number of attractive options. Consider the IdeaPad U310, successor to the IdeaPad U300s we checked out (and enjoyed) in November — albeit with new hardware and a few budget-minded compromises.

The U310 is powered by a dual-core Ivy Bridge processor, 4GB of RAM and equipped with a 500GB hard drive. The $799 (as configured) price tag makes it one of the cheapest ultrabooks we’ve reviewed to date. It also features Lenovo’s chiclet-style AccuType keyboard, previously experienced on the Lenovo IdeaPad Y480 and ThinkPad X230. Is the latest revision enough to pique your interest? Read on, and we’ll find out.

The IdeaPad U310 is gorgeous. I think it’s the aqua blue finish: the laptop’s aluminum shell is smooth and inviting, cool to the touch and casting off a subtle shine when hit by light. I couldn’t help but crack it open, revealing the equally bright white base that contrasts nicely with the black chiclet keys; it’s easy to forget this is the same Lenovo responsible for the aesthetically-challenged ThinkPad line. The lid’s hinges are a little stiff, but the overall build is solid and sturdy. At 0.7 inches thick the U310 is scarcely taller than its Gigabit ethernet connector, but bulkier than most of the ultrabooks we’ve reviewed. At 3.8 pounds it’s heavier than the rest too, but certainly not onerous to carry around.

The unit I reviewed is powered by a 1.7GHz Intel Core i5-3317U processor, 4GB of RAM, a 500GB 5400RPM hard drive and a 32GB SSD Cache drive: about right for the form factor and $799 price point. It’s a step up from the base model, which is equipped with a Core i3-3217U CPU. If you’d like to chip in a little more, optional extras include upgrading up to a Core i7 processor. While that will buy you a bit of extra oomph, the U310’s reliance on Intel’s integrated graphics keep gaming out of reach.

The port selection is sparse, though that is generally expected from a machine this svelte. A pair of USB 3.0 ports sit on the left, alongside an HDMI port and the Gigabit Ethernet connector. There’s a USB 2.0 port and a headphone jack on the right, and an SD card reader on the left side of the front edge. Of note: the lithium-ion polymer battery isn’t user replaceable. That’s increasingly common among ultrabooks, but may be a deal breaker for some. I also noticed a curious, slightly annoying design feature: the plastic base juts out a bit farther than the machine’s aluminum frame, creating a sort of plastic underbite on the sides. I tend to paw at laptops while daydreaming or attempting to plug in devices in the dark, and while I was never in danger of cutting myself the sharp bite made for something of a rude awakening. 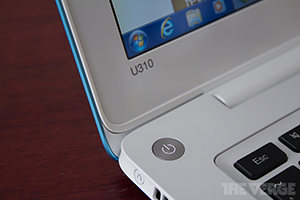 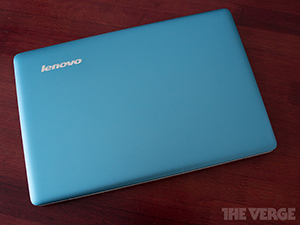 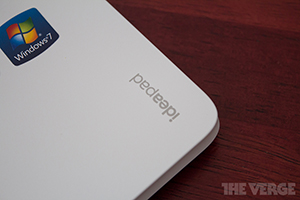 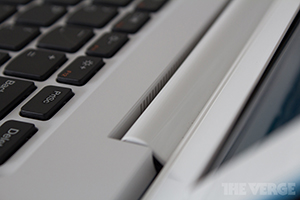 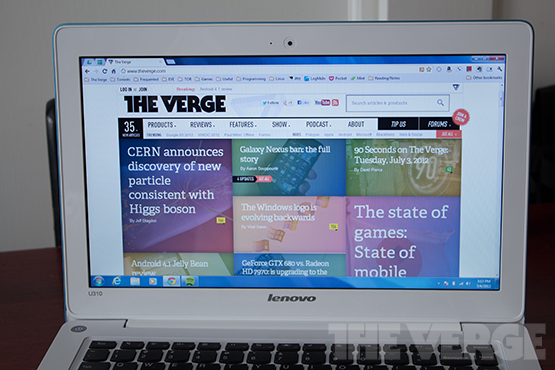 The 1366 x 768 pixel resolution is standard for ultrabooks, and while we might gnash and wail that isn’t likely to change any time soon. The screen is fairly small at 13.3 inches, so the resolution works: there isn’t too much real estate, but the resolution fits the display’s size. The display’s quality is also right in line with a $799 laptop: reflections are a bit of a problem, and color contrast isn’t great if you rock from side to side, but viewing angles are strong (if you’re out of direct light) and video and photos look great.

Alas, the audio quality isn’t really up to snuff. The speakers are sandwiched between the display’s hinge and the base of the laptop. They’re loud — easily filling a small room — but the sound is devoid of depth or bass. Crank the volume up and the sound starts to sound distorted; these speakers will serve if you’re not especially picky, but you’ll want to keep a pair of headphones nearby. 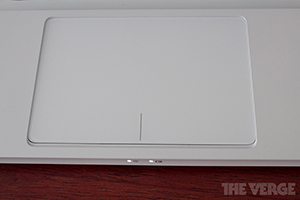 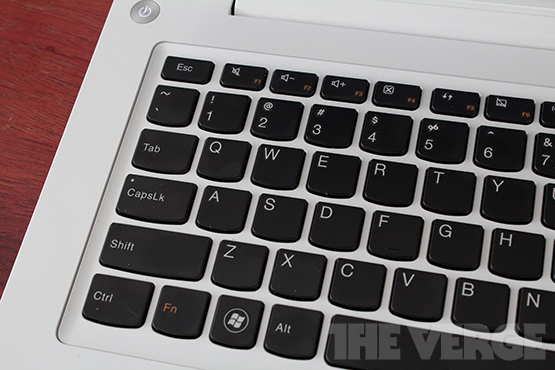 The chiclet-style AccuType keyboard replaces Lenovo’s classic sloped keys. I’ve had a few opportunities to work with them (on the ThinkPad X230 and IdeaPad Y480), and while the layout is a bit different every time, the new design doesn’t fail to impress. The keys are curved at the bottom to give each key a bit of extra room, without forcing your hands to stretch out any further — Lenovo calls it a "smile" design. The Function row toggles various hardware controls like the volume or screen brightness (much like the default settings on a Mac). I actually rather like this arrangement; you’ll need to hold the Function key for traditional access to the F1 - F12 keys, but those see very little use nowadays.

Lenovo isn’t trying anything too dramatic with the keyboard layout: the Home, End, PageUp and PageDown keys are sandwiched on the far right corner of the keyboard tray, and I found myself accidentally tapping them from time to time as a stray finger hunted for the arrow keys. The only real transgression here is the lack of backlighting. Even accomplished touch typists stand to benefit from being able to see their keys in the dark, and while I understand the need to cut costs, the option is sorely missed.

Finally, there’s the glass trackpad. It’s smooth and responsive, and while I’m not a fan of the glossy texture it tackles gestures and scrolling with aplomb. A short line splits the single-clicking surface into left and right hemispheres, and it had no trouble registering clicks, tracking my pinching and swiping, or keeping up with my scrolling. It just works. Could the days of Windows-trackpad mediocrity finally be coming to a close? 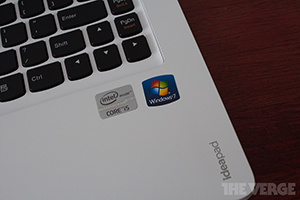 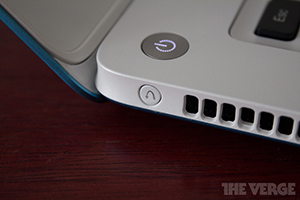 The 1.7GHz Core i5-3317U is an ultra-low power CPU and performs about as well as expected. The U310 remained nice and snappy while I was using it, tackling a bevy of browser tabs and music streaming with ease. Fullscreen HD video playback and streaming was similarly snappy; if you aren’t looking for a heavy-lifter, this laptop will serve you well. The lack of a larger solid state drive is unfortunate, but it’s quick enough on the draw, thanks to that mSATA cache drive: it was ready for action roughly 25 seconds after I hit the power button, and wakes up from sleep in about 2.7 seconds. It dragged its proverbial feet on synthetic benchmark tests and gaming performance was non-existent: the U310 relies on Intel integrated graphics, and was incapable of belching out playable frame rates, at all.

The laptop is also fairly light on bloatware. McAfee Antivirus Plus is present, working its insidious claws throughout the machine (though you’ll have to activate it to get security scanning done). I’d recommend removing it entirely — security is great, but not worth the consistent nagging pop-ups or thinly-veiled scare tactics. There are plenty of excellent, free antivirus options that will get the job done and stay out of your way. The laptop is otherwise fairly clean: it’s bundled with many of the same apps as the Lenovo IdeaPad Y480, including Cyberlink’s YouCam software, Dolby Home Theater audio software and the ooVoo video and instant messaging app. Lenovo’s OneKey Recovery app makes an appearance: a dedicated hardware button sits on the left edge of the PC. You’ll need to connect a burner to the machine to actually use the recovery disc options, but it can backup and restore from image files. 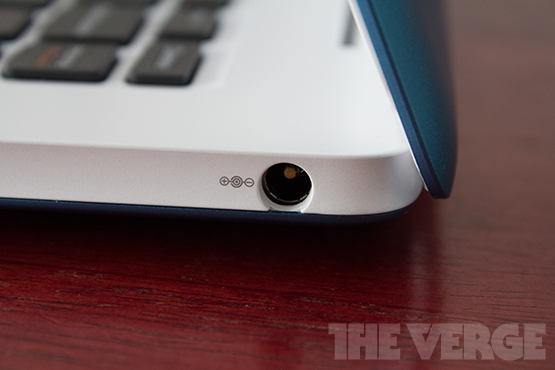 On The Verge Battery Test, the IdeaPad chugged along for four hours and thirty-two minutes before calling it quits. Our test consists of downloading high-resolution images and cycling through 100 websites with the display’s brightness set to 65 percent. My own use involves music streaming, plenty of web surfing, and a lot of writing: I saw just under four and a half hours before the U310’s batteries ran dry. That's not much staying power, especially when compared to competing ultrabooks. As I mentioned earlier, the battery isn’t user replaceable so you’ll want to keep the charger nearby if you’re planning any longer outings (fortunately, the charger is rather small).

Heat isn’t a problem here; the vent on the left edge of the machine is just about always pumping out warm air, but it wasn’t very noticeable. Similarly, the underside of the U310 gets a bit warmer on the upper left corner (where the CPU is lurking), but never uncomfortably so. Noise is a different story. The U310’s fan isn’t especially loud but its near-constant hum becomes especially noticeable in quiet spaces; I’m almost always playing music and that’s enough to drown out the low, steady whining, but it’s otherwise a bit distracting. 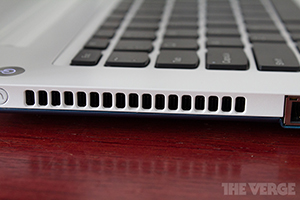 The sum of its parts

The Lenovo IdeaPad U310 gets many of the important bits right: the keyboard and trackpad are great, and while the display won’t necessarily blow you away, there are no dramatic flaws. The speakers will also do in a pinch -- you aren’t going to throw a party with this machine (at least, not a very spectacular one), but you aren’t going to frighten your neighbors or roommates either. I’m also not ashamed to admit that I fell for the shiny aluminum shell and stark white base. It’s a rather attractive piece of equipment, but performance is merely adequate, and the battery life is on the low end of the spectrum relative to its ultrabook brethren. Your hard earned dollars will not be wasted on the U310, especially if you’re primarily concerned with getting some writing and web browsing done. Ultimately, you’re getting what you pay for (and little else).