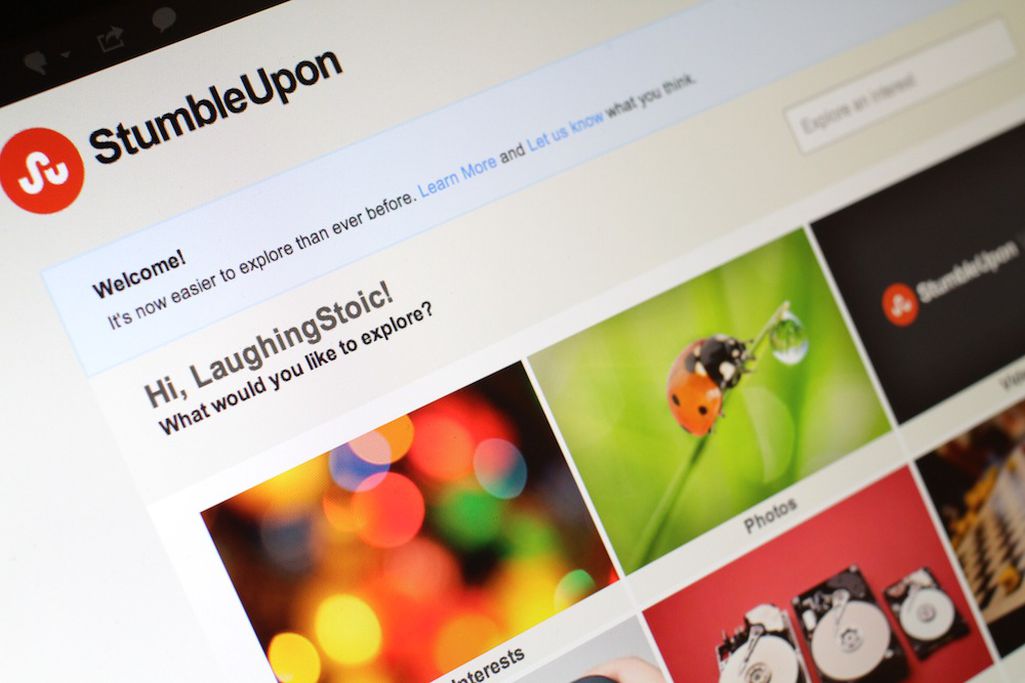 StumbleUpon, founded in 2001, was one of the first sites to become wildly popular by helping people find amusing, weird, and useful things on the internet. Bored at work? Idle at home? By repeatedly clicking StumbleUpon’s simple "stumble" button, it’s possible to scan through hundreds of websites in one sitting, as its algorithm takes stabs at what you might like. Here’s a recipe for pasta pie. Here’s a video of a robot walking up some stairs. Here’s Anderson Cooper’s blog. It’s mindless, and it's brilliant.

StumbleUpon has an interesting history. EBay swallowed up the company in 2007 when it was just a Firefox extension, albeit with 7.4 million users and some advertising revenue. But the auctionhouse couldn’t figure out what to do with its acquisition, so in 2009 cofounders Garrett Camp and Geoff Smith bought the site back with the help of investors for a reported $75 million. StumbleUpon ballooned from about 30 to 130 employees, about two-thirds of whom are developers. After spinning out, the company launched plug-ins for all the major browsers and started amassing traffic straight to StumbleUpon.com. It launched apps for iPhone and iPad, Android phones, and the Nook and Kindle e-readers.

In April, after three years as a "restartup," Camp proudly announced two milestones. StumbleUpon hit 25 million users, more than triple the number it had when it was owned by eBay. What’s more, those users were clicking the "stumble" button 1.2 billion times a month.

All seemed rosy. But behind the scenes, StumbleUpon's traffic was way down in the wake of its biggest redesign ever. StumbleUpon was always a big dumb firehose of traffic, which is why publishers loved it. But starting at the end of last year, StumbleUpon has been driving noticeably fewer hits — reminiscent of the fallout at rival aggregator Digg, where a big redesign drove users away.

In May, Camp stepped down as CEO. "After 10 years leading StumbleUpon, it’s time for a change," he wrote on the company blog. Camp, who also cofounded the car service Uber, now chairs StumbleUpon’s board. The company is still looking for a CEO. In the interim, three executives are making decisions as a committee.

As part of a major overhaul in December, StumbleUpon tweaked its homepage to look more modern and "fresh," and tried to make the navigation more visual. At the same time, big changes were made to the algorithm that had the effect of distributing stumbles — pageviews originating from StumbleUpon — more widely across the web, so that users weren’t being sent to the same few sites over and over again. Around the same time, StumbleUpon started pushing its mobile apps, which now account for 25 percent of stumbles. Unfortunately, mobile users tend to spend less time on the site. 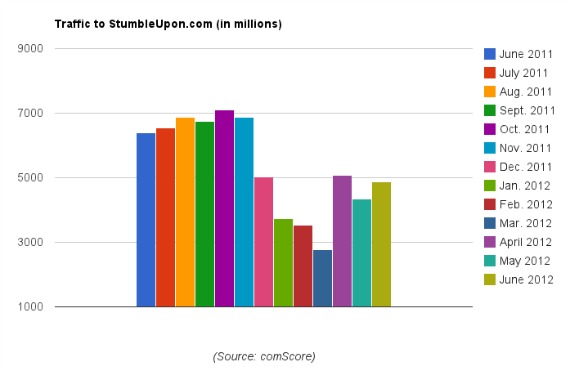 All this combined to significantly reduce StumbleUpon's footprint. Traffic to StumbleUpon.com dropped 25 percent from December to January, according to comScore, with no rebound yet. Traffic in June was down 24 percent compared to June of last year.

The traffic StumbleUpon sends to other sites is also down. According to StatCounter, StumbleUpon was the top social media site in the U.S. in early 2009, referring more traffic than any other social media site. But StumbleUpon’s traffic started falling rapidly even as its self-reported number of registered users grew. StumbleUpon’s referrals dipped below Facebook’s in the summer of 2009 and sank below YouTube’s in March of 2012. If the trends continue, StumbleUpon is about to be eclipsed by Pinterest as a source of web traffic.

For BuzzFeed, a competitor of StumbleUpon's, the number of organic referrals from StumbleUpon is down. A chart of BuzzFeed’s traffic shows a rapid rise after BuzzFeed came into existence, with referrals peaking in November of 2011. Then there is a precipitous drop from close to 11 million referrals in December, the month of the redesign, to 7.5 million in January. The StumbleUpon traffic is so bizarre-looking that Aswini Anburajan, author of BuzzFeed’s Social Intelligence Report, at first mistook StumbleUpon for a new site.

"StumbleUpon did experience a drop, but even with that drop, [it’s] a very significant referrer of traffic for us," Anburajan said in an email. Only Facebook and Twitter sent more traffic, with 60 million and 20 million monthly referrals respectively.

Digg's infamous redesign flopped because users hated it. What happened at StumbleUpon was more subtle. Some small, isolated changes were not well received, and one user told The Verge that the new logo "looked like a snake cut in half." But that was the extent of the outcry. So what happened?

Marc Leibowitz, VP of business development and marketing and one of the three executives calling the shots around StumbleUpon these days, acknowledged that traffic fell after the changes made in December. It’s a consequence of StumbleUpon’s efforts to improve the product, he said. "The amount of traffic that we drive around the web ultimately could continue to go down," he said. "In some ways we don’t actually worry about, ‘are we sending as much total stumble traffic?’ as we do, ‘are users spending a lot of time on the page?’"

Basically, StumbleUpon was trying to make its product better for users by tuning the algorithm and making sure the site looked good on mobile devices. But what's good for users doesn't necessarily please StumbleUpon's customers, which include mostly brands and publishers. StumbleUpon was in the habit of promising advertisers organic traffic in addition to paid traffic. Now the company has to explain that the traffic is smaller, but more targeted and therefore higher quality.

For many sites where traffic is a primary metric of success, that nuance can be hard to grasp. "We’ll continue to work with sites to help them better understand that," Leibowitz said. He bragged that StumbleUpon users are very engaged with the content, which is good for advertisers. "We really don’t hear from advertisers that we’re not giving them enough engaged users," Leibowitz said.

Instead, advertisers are asking for "more users," he said. Even as it ramps up its mobile offerings and tweaks the algorithm to keep stumblers sucked in for longer, StumbleUpon understands that it must increase traffic referrals in the U.S. and beyond. The company launched a U.K. version of the site a few weeks ago, with more countries planned for the coming months.

How does StumbleUpon make money?

StumbleUpon is an "established company with a real business model," Leibowitz said. That business model consists of one product: Paid Discovery. Five percent of stumbles are reserved for advertisers, meaning users hit a sponsored page about every 20 stumbles. The sponsored pages are clearly but not obnoxiously marked with a green starburst and the word "Sponsored."

Advertisers pay StumbleUpon between $.05 and $.25 for the delivery of a visitor. Advertisers can filter by interest, location, and demographics; they can pay only for "engaged visitors," which StumbleUpon determines by a secret mix of clicks and time spent on the page. "We do use it and we love it," BuzzFeed founder Jonah Peretti told The Verge in an email. BuzzFeed, which is in a similar business of driving traffic to brands, uses StumbleUpon to boost traffic to its own sponsored posts. "When we notice a brand post that is doing well on StumbleUpon we often spend to add fuel to the fire."

BuzzFeed is the perfect StumbleUpon advertiser: Peretti and his team intuitively understand why paid discovery works. "There's lots more they could do to add to the product but it is pretty impressive how simple and powerful it is already," Peretti said. "It's advertising without ad units — pretty neat trick!"

StumbleUpon’s pitch is tough for other brands. Advertising with Paid Discovery is a bit more work than a search or banner ad. The entire page is the advertisement, meaning brands need to create a website that will appeal to someone who is in the middle of casually browsing the web.

Clicking through, The Verge saw a StumbleUpon house ad for every outside advertisement, suggesting a significant percentage of inventory remained unsold. In place of a sponsored stumble, we were encouraged to invite friends; 40 stumbles later, we were prompted to fill out our profile.

not the first to stumble

Why is it so tough for content discovery sites with loads of click-happy users to make money? Reddit spun out from parent company Conde Nast in September 2011 because the publisher couldn’t figure out how to monetize it. Tumblr recently relented on its anti-advertising stance after a series of creative money-making experiments failed. Digg’s fickle users abandoned it for Reddit, which is hugely popular but hasn’t proved itself yet as a sustainable going concern. Delicious was slowly squashed under Yahoo’s heel until it was sold to the two cofounders of YouTube. "I think the time [for Delicious] has passed, but maybe they'll do something cool with the name," founder Joshua Schachter told CNN in an interview at the time.

Even as content discovery sites seem to flounder, they remain hugely important to web publishers. Gawker publisher Nick Denton once nixed the so-called "share buttons," quick links on a post that encourage readers to share it. "These sites festooned with social media buttons—they look like primitive tribesmen clutching pathetically onto shiny baubles they believe to the symbols of modernity," he said at the time. The ban lasted one week. Gawker now prompts readers to share to five sites: Facebook, Twitter, Tumblr, Instapaper, and StumbleUpon.

Leibowitz says the site has 75,000 advertisers including Intuit, AOL, Arby’s, Paramount, Sony, and Heineken. "One of the things we say internally a lot of the time is, we worry about a lot of things but we don’t worry about the monetization side," he said. 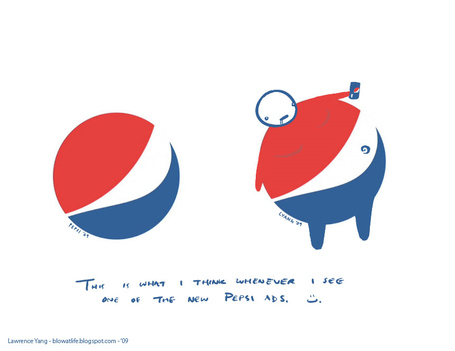 StumbleUpon tells advertisers that if their content is good enough, they’ll garner free traffic on top of their paid traffic as StumbleUpon users are compelled to organically share the content. But it’s not easy to make something branded that will go viral on StumbleUpon. Consider that the only brand-centric page to organically break into the most popular stumbles in 2009 was the Pepsi Logo Response, a sketch by a web comic artist that made the new Pepsi logo into an obese soda drinker.

StumbleUpon recognizes that it needs to keep tweaking the service in order to retain current users and recruit new ones. Post-redesign, the product seems like it could use a little love. While browsing from the web, we hit two defunct pages; meaning that instead of serving up a funny or informative website, StumbleUpon took us to the placeholder page of text ads. The private message feature doesn't work. The site relies heavily on a survey users fill out when they register, coupled with behavior while using the service. In other words, it takes a lot of input to train StumbleUpon to give you good recommendations.

The experience is also somewhat isolating compared to other social media. "I didn't really need yet another discovery method, on top of Reddit and Tumblr," Nick Douglas, the editor of humor site Slacktory, said when asked if he uses StumbleUpon. "Both of those include decent discussion; they have an actual culture. [StumbleUpon] seemed like a toy I was using, alone."

At ten years old, StumbleUpon could retire gracefully as one of web 2.0’s original gangsters. But Leibowitz and the other two top decision makers, CFO Mark Bartels and VP of engineering Japjit Tulsi, are doubling down on their bet that stumbling is still a desirable to way to peruse the web. "We know what our roadmap is," Leibowitz said. "We just need to execute on that."