Projectbook for iPad tries to beat Evernote at its own game

"Note-taking is to tablets what word processing is for PCs," Theory.io founder Peter Tamte says," and there's a huge opportunity here to be the Microsoft Word of the tablet era." Tamte is obsessed with Evernote, using it every day for everything from note-taking to web-clipping to project management, but he wants something more — an app that can provide more context inside each note. "Digital clutter has replaced paper clutter," he says. Tamte today launched Projectbook, a notepad, a sketchbook, and a To Do manager in one package

Share All sharing options for: Projectbook for iPad tries to beat Evernote at its own game

"Note-taking is to tablets what word processing is to PCs," Theory.io founder Peter Tamte says, "and there's a huge opportunity here to be the Microsoft Word of the tablet era." Tamte is obsessed with Evernote, and uses it every day for everything from note-taking to web-clipping to project management, but he always wanted something more — an app that can provide more context inside each note. "Digital clutter has replaced paper clutter," he says. Tamte today launched Projectbook: a notepad, a sketchbook, and a To Do manager in one package with Evernote as its primary target.

Taking on Evernote and its 34+ million users is a pretty enormous undertaking, but Tamte is up to the challenge, having already had extensive experience in the tech space. He founded MacSoft in the 90s, which once published 40 percent of all Mac games, and worked as VP at Bungie as Halo neared its launch. He later worked at Apple, where he was Senior Director of Consumer Marketing, and more recently as founder of Destineer, a video games studio. For the past year, Tamte's Theory.io company has operated undercover as it built Projectbook, which brings into play a lot of the knowledge Tamte gained while at MacSoft. The company was known for its games, but 40 percent of its sales were from productivity apps. 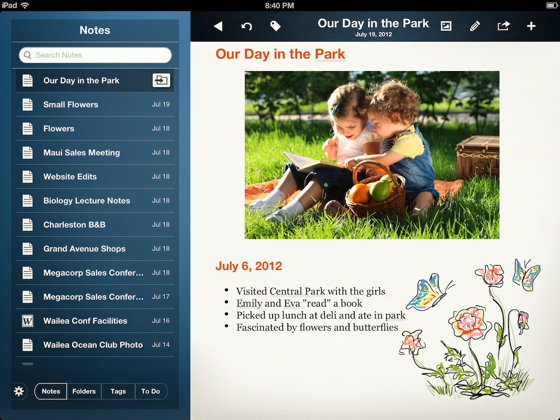 Projectbook aims straight for the holes in Evernote by supporting searchable Word documents, full outline editing, handwriting recognition, a full-fledged task manager, and notes that can relate to each other. Tamte also wanted to charge users an initial fee so they never need to worry about paying for "offline access" like you do with Evernote. Projectbook lets you annotate notes with lines, shapes, and text — something Evernote hasn't come through on since it purchased Skitch last August. Apps like Penultimate (which Evernote also now owns) offer in-page annotation, but Evernote hasn't yet found a simple way to integrate that either.

Since every note in Projectbook is a fixed amount of pixels wide, you're free to attach documents, voice memos, photos, handwriting, web clips, and illustrations to a fixed spot inside any note. Notes aren't treated as files with other files attached, but instead as canvases where you can plop down various media. Tamte didn't want to cut corners in building the app, paying attention to some details both notes apps and sketching apps overlook. For example, Projectbook has variable line weight sketching like Paper, so lines have character and fluidity. Since Projectbook notes might include lots of different things, there's a button to email a note as a PDF, HTML document, or in plain text. 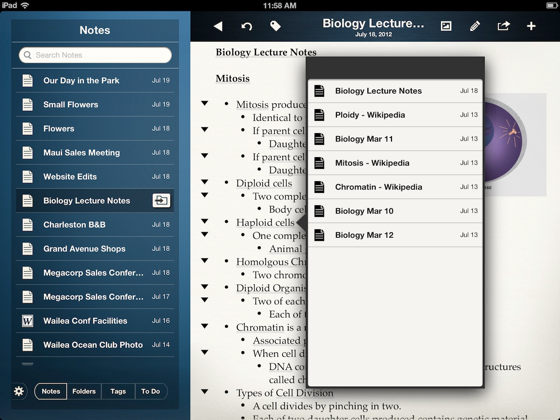 Perhaps Projectbook's most compelling feature is its natural language processing that figures out the relationship between all of your notes. "We hired three PhD's to handle it," Tamte said. Tap "show similar notes" inside Projectbook, and it shows you notes with the highest number of important words (often nouns) in common with the note you're looking at. Tap or search the word "apps," and see every note that relates to the word "app" inside a little pop-up window. Like in Evernote, you can save searches for later, but in Projectbook these searches take on a new identity as folders, which auto-update without you initiating a search. The app also searches through Word docs and PDFs in real time.

Aside from Projectbook's word search index, it also indexes every to do item you've ever added to a note. Add a to do item inside a note, and Projectbook adds it to its isolated to do area, and even adds a due date if you've mentioned one inside the item's text. The due date input works just like in Fantastical, which parses phrases like "next Friday" using natural language processing to figure out when you want to make an appointment or reminder. You can also attach files or other notes to any item, as well as nest to do's. Projectbook's to do manager is no OmniFocus, but by supplying context (like contacts and notes) for to do items, the to do manager ends up being pretty powerful. 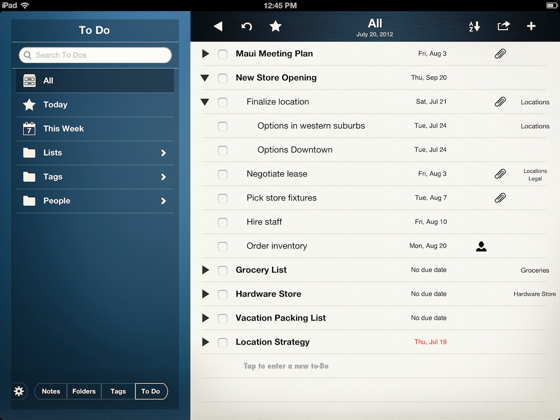 Evernote is pretty tough to beat, combining simplicity with flexibility and omnipresence. Projectbook isn't as handsome as Evernote and won't be on Mac or iPhone for another few months, but Tamte has high hopes for his new app in part because there aren't many Evernote alternatives out there. Projectbook is all about metadata and various forms of media, tying together notes with contacts, web clips documents, scribbles, and to do's, whereas Evernote is just about notes and tags. Projectbook notes can very quickly get messy, but for people who want the flexibility of a sketching app with the structure of a notes app, it could hit a sweet spot. The app will set you back $1.99 ($6.99 starting August 15th), and there are no subscriptions to purchase here. For those who do decide to jump from the Evernote ship, beware. One of Evernote's most killer features is its intimate relationship and integration with many other apps, developers, and platforms — something that takes years to figure out.