Lost Photos pulls forgotten images out of your old emails

Share All sharing options for: Lost Photos pulls forgotten images out of your old emails

Lost Photos is a new app that promises to give you access to all the images you’ve sent or received as email attachments, letting you take a peek at photos you’ve long since forgotten about. Once you have the photos in front of you, the interface (pictured below) gives you options to post selected images to Facebook or Twitter, send them as emails, import them to iPhoto, or reveal them in the Finder. 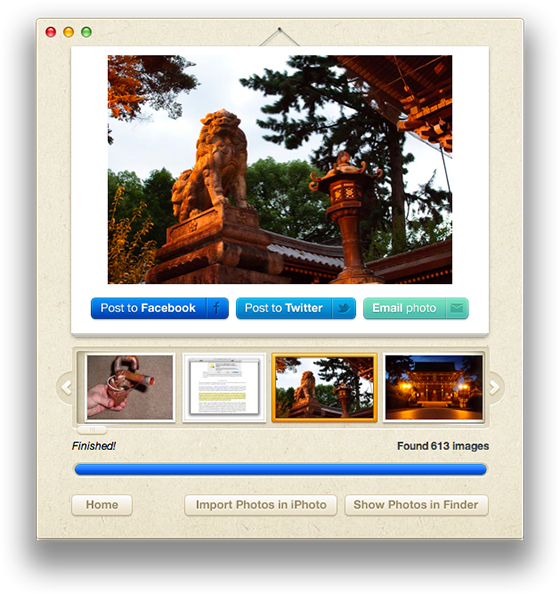 Lost Photos isn’t the first of its kind, but we’re pleased with the app’s simple design. Performance is a different story — it managed to dig through our decade-old Gmail accounts in less than half an hour, but some big variation in the number of pictures uncovered (600 for one versus 30 for another) makes us think you’ll want to run this a few times to make sure you get everything. It's also worth pointing out that while the app works fine with services like Gmail, AOL, and Yahoo, neither Hotmail nor its Outlook.com re-brand are supported. Lastly, tweeting or posting to Facebook appends an ad (I found this with Lost Photos!) that is impossible to remove — a little disappointing for a paid app.

Reservations aside, we think the prospect of finding the hidden surprises in an email account is worth the price of admission. Lost Photos is available on the Mac App Store for $2.99, and a Windows version is available directly from the developer’s website.